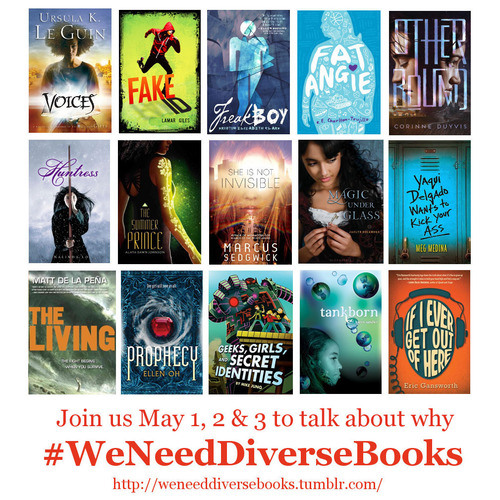 Have you been following the brouhaha on Twitter: #WeNeedDiverseBooks ?

This is what went down:

Even the invited panelists have begun raising important questions, as Rick Riordan tweeted the following:

Not surprisingly, there were many angry posts about this:

Blindingly White: BookCon, John Green, and Knowing When It’s Time to Speak Up

And BookCon responded but not in a satisfactory way despite a backlash of negative publicity:

A Close Reading of BookCon’s Statement

“Recently, there’s been a groundswell of discontent over the lack of diversity in children’s literature. The issue is being picked up by news outlets like these two pieces in the NYT, CNN, EW, and many more. But while we individually care about diversity, there is still a disconnect. BEA’s Bookcon recently announced an all-white-male panel of “luminaries of children’s literature,” and when we pointed out the lack of diversity, nothing changed.” From Vamos y Leer
With your help, we can get the word out to the publishing industry.

Here’s how you can participate

On May 1st at 1pm (EST), there will be a public call for action that will spread over 3 days. We’re starting with a visual social media campaign using the hashtag #WeNeedDiverseBooks. We want people to tweet, Tumblr, Instagram, Facebook, blog, and post anywhere they can to help make the hashtag go viral.

For the visual part of the campaign:

On May 2nd, the second part of our campaign will roll out with a Twitter chat scheduled for 2pm (EST) using the same hashtag. Please use #WeNeedDiverseBooks at 2pm on May 2nd and share your thoughts on the issues with diversity in literature and why diversity matters to you.

On May 3rd, 2pm (EST), the third portion of our campaign will begin. There will be a Diversify Your Shelves initiative to encourage people to put their money where their mouth is and buy diverse books and take photos of them. Diversify Your Shelves is all about actively seeking out diverse literature in bookstores and libraries, and there will be some fantastic giveaways for people who participate in the campaign! More details to come!

I hope that you will take part in this in any way you can. We need to spread the word far and wide so that it will trend on Twitter. So that media outlets will pick it up as a news item. So that the organizers of BEA and every big conference and festival out there gets the message that diversity is important to everyone. We hope you will help us by being a part of this movement.

Colby Sharp of the Nerdy Book Club inspired me to purchase two copies of a beloved diversity book from an independent bookshop and do a giveaway. I choose Joseph Bruchac’s latest dystopian action-adventure page-turner, Killer of Enemies. I’m reading it now and it should be on the short list for a Printz award! If your child likes dystopian action adventure with a strong girl heroine like The Hunger Games, then please give his young adult thriller a try!

Joseph Bruchac is on MY shortlist for children’s and YA authors who deserve to be famous but probably aren’t because they are people of color. He’s written more than 120 books for kids and adults across a wide range of genres from picture books to easy chapter books to YA. And all are excellent. Why isn’t he more well known?

Killer of Enemies by Joseph Bruchac

Years ago, seventeen-year-old Apache hunter Lozen and her family lived in a world of haves and have-nots. There were the Ones—people so augmented with technology and genetic enhancements that they were barely human—and there was everyone else who served them. Then the Cloud came, and everything changed. Tech stopped working. The world plunged back into a new steam age. The Ones’ pets—genetically engineered monsters—turned on them and are now loose in the world. Lozen was not one of the lucky ones pre-C, but fate has given her a unique set of survival skills and magical abilities.

She hunts monsters for the Ones who survived the apocalyptic events of the Cloud, which ensures the safety of her kidnapped family. But with every monster she takes down, Lozen’s powers grow, and she connects those powers to an ancient legend of her people. It soon becomes clear to Lozen that she is not just a hired gun. As the legendary Killer of Enemies was in the ancient days of the Apache people, Lozen is meant to be a more than a hunter. Lozen is meant to be a hero. 12 thoughts on “Joseph Bruchac YA GIVEAWAY”