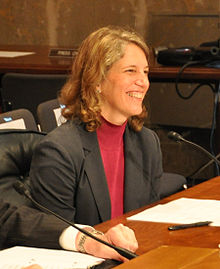 I am so proud of my freshman college roommate, Sylvia Mathews Burwell. She will be the next Health Secretary  on Obama’s Cabinet.

“President Barack Obama announced Friday that he will nominate Sylvia Mathews Burwell, who currently directs the White House budget office, to be the next health secretary, the Cabinet official who’s ultimately responsible for overseeing Obamacare. During the ceremony, Obama touted Burwell skills as someone who can handle tough challenges.

She also has a history in Washington circles that extends beyond her current position.” From CNN

I’d like tell you what she was like as college roommate. Sylvia was, without question, the hardest working human being I have ever met. She was (and is) extremely disciplined. When I was sleeping through class, she was up early, eating breakfast, and studying. Every Single Day.

As the daughter of Greek immigrants from West Virginia, the story she told me about growing up that stuck with me most was how her father, a optometrist, would size glasses for a child so that they would last a lifetime. He knew that this would be the only pair of glasses the family could afford. I wore contacts in college AND had glasses for when I was too lazy to wear contacts. My family wasn’t wealthy by any means, but I had broken several pairs of glasses as a child (basketball pass gone awry) and they were replaced without much consternation. This was the first time I understood what life might be like in Appalachia.

But it wasn’t just Sylvia’s work ethic that makes her above and beyond different from my other classmates. I met a lot of Type A personalities who are intensely driven in college and you meet a few prodigies. Math prodigies that beat the Russians in an international competitions. Music prodigies that perform at Carnegie Hall before they can drive. Inventors can be prodigies too. Maybe even creative types like Steve Jobs. But have you ever heard of social emotional prodigies?

Sylvia is a prodigy of social emotional skills. I don’t say that lightly. I remember being such an awkward teen that dining halls were best navigated by meeting up with friends. That first week of Freshman Orientation was a mad scramble to make friends to have dining companions. Our freshman dorm was really small — just 31 kids and an advisor. That first week of school, a large group of us ate dinner together. Sylvia has this gift of being the most charming hostess at the dinner table.

Not only could she make pleasant and interesting small talk at the table, but she did it in a way that included everyone while not being a conversation hog. I still have no idea how to do this! And, similarly, I find working a room to be … work. I struggle with the transitions from group to group and it’s not easy to find common ground to connect with everyone. Sylvia should give lessons in how to work a room because she has such integrity in the way she interacts with people that they don’t feel gladhanded.

And did I mention that she’s never in a bad mood? I should know, right?! She really is a person who feels genuine gratitude for what she has received (though others could attribute it to working extremely hard). It lasts from early in the morning to late at night. And she’s not affect by exam stress, kicked of the room from my visitors,  or being kept awake by my snoring. I’m telling you that she keeps an even and happy temperament no matter what the circumstances.

I can see how that would be unusual in politics. It’s easy to be stressed out and having a bad day, and then yell at a few people who now hate you. You do that a few times, and pretty soon, you’ve made a short list of enemies. Sylvia simply does not make enemies. You can’t help but like her even if she gives you bad news. Couple that with her work ethic and her ability to connect with people and you have a social emotional rock star. For anyone who doesn’t think that social emotional skills is the key predictor to success, there is a slew of research.

But I just need to think of Sylvia as my personal touchstone on the importance of social emotional skills versus squeezing out a few more IQ points. For our year at Harvard, there was just one Rhodes Scholar. Guess who it was? Yep, it was Sylvia. She would be the first person to say that she didn’t ace her SATs. That Brooke Shields (who graduated from Princeton our same year) scored a little higher. The Rhodes Scholarship is based on a group interview resembling a cocktail party. I think it is an actual cocktail party. The ability to conduct small group conversations is the key to winning this prestigious scholarship.

It’s weird but I discovered that I have four classmates on Obama’s cabinet. My senior year classmate is Rosie Gumataotao Rios who makes the U.S. money. Another freshman dormmate from that tiny dorm, Shawn Donovan, is the HUD secretary. Arnie Duncan is the Education Secretary though I’ve never met him. I rest easy knowing these folks are working on our nation’s problems, and I can especially assure you that Obamacare is in good hands with Sylvia.

As a parent, my takeaway is to focus on social emotional skills rather than squeeze out a few more I.Q. points. I am reminded of Calpurnia Tate who, in 1899, is expected to make light and pleasant dinner conversation as the only daughter. The story is set in Texas and I wonder if the emphasis on social niceties is a Southern thing?

If you want to try the art of dinner conversation as I do, one idea to try is to use Growing Book by Book’s Table Topics. My husband and I are also finding that delivering meals to the elderly which includes an hour of pleasant conversation helps model this for our kids. We  set ground rules in the car with our kids before we go in:

Questions to get a conversation going:

What are ways you work on Social Emotional skills at your house? I’d love to hear your ideas! Thanks!

p.s. I wish I could include some photos of Sylvia from college but my photo albums are back at my mother’s house in California. I’ll add them the next chance I get!

12 thoughts on “Why Social Emotional Skills Rule the World! My College Roommate Will Fix Obamacare”