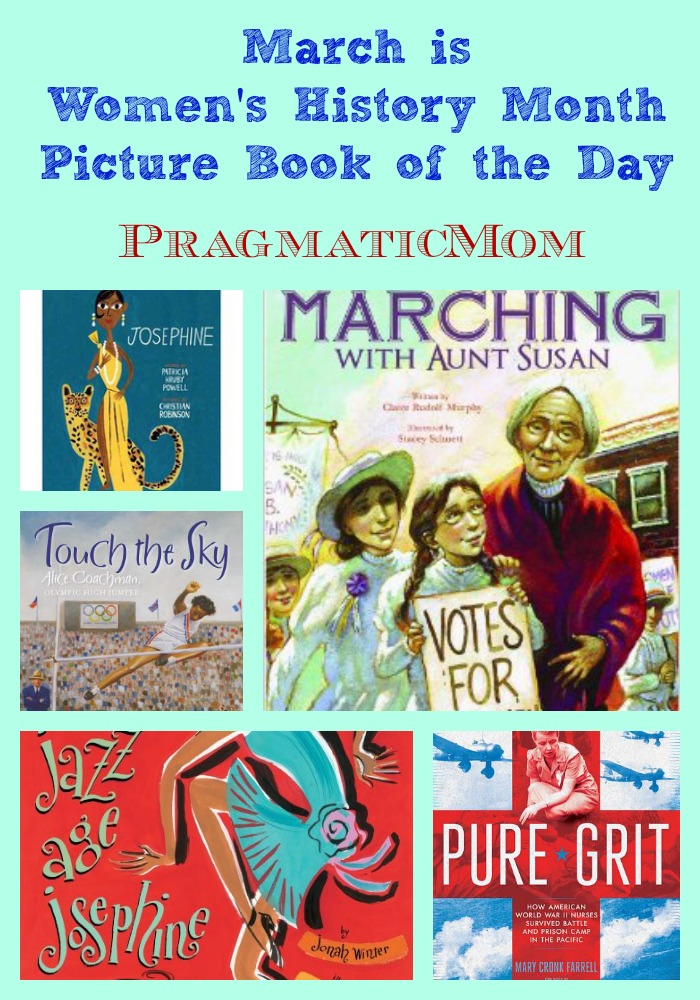 March is Women’s History Month and one great way to celebrate is to go to my friend, Margo Tannebaum’s joint blog, KidLit Celebrates Women’s History Month. For the month of March, Margo of The Fourth Musketeer and her partner in this endeavor, Shelf Employed, have lined up guest bloggers to celebrate children’s books featuring women in history. Both are children’s librarians with wonderful blogs!!

Today is my turn for Picture Book of the Day, so I thought I would jump on their bandwagon and cover five picture books of women to celebrate and learn about in honor of Women’s History Month. I hope you share with me your favorite children’s book celebrating a women who made a difference. Thank you!

It’s such a small world, but last year I won a pile of books from KidLit Celebrates Women’s History Month and I have chosen a few from that treasure trove. (Thank you Margo!!).

With the 2014 Winter Olympics recently completed, the Olympics was on my mind and I was delighted to learn about Alice Coachman who I had never heard of. Told in lyrical free verse, Alice grew up in rural Georgia where there were no high jump facilities. Undaunted, she used sticks and rags to create her own equipment.

I was heartened to learn that many helped Alice go after her dream. Her teachers bought her shoes, shorts and socks. She earned a place on the Tuskegee Golden Tigerettes, a famous team that helped her develop her skills into that of an Olympic athlete. In 1948 during the London Olympics, Alice Coachman became the first African American to win a gold medal. And this lovely picture helps to make history as well! [free verse picture book, ages 6 and up]

Marching with Aunt Susan: Susan B. Anthony and the Fight for Women’s Suffrage by Claire Rudolf Murphy, illustrated by Stacey Schuett

For the work of a day,

For the taxes we pay,

For the laws we obey,

We want something to say.

(From a political postcard)

What I loved about this Susan B. Anthony story told through the eyes of a young girl Bessie is that it is actually true!! Bessie Keith Pond was a real girl who lived in Berkeley, California. In 1896, she knew Susan through her mother and aunts, all staunch Suffragists who were active during the California campaign to gain the vote for women.

Bessie’s best friend Rita grew up with a more traditional father and we watch them side by side as they both try to support the women’s right to vote. In this powerful way, we see what women were up against and how difficult the battle truly was.

Referendum #6 to give women the right to vote ultimately failed to pass but the lesson is here is to keep on trying and that’s a good one for us all. [picture book, ages 5 and up]

Pure Grit tells the story of several nurses in detail as well as the general story of the first American women — 79 of  them who were left behind when MacArthur was forced to retreat from the Phillipines and were taken prisoner by the Japanese. They were subjected to hunger, disease and repeated bombing. Not only did all 79 survive but they also took care of the wounded soldiers, saving thousands of lives.

I have two picture books about Josephine Baker!

Jazz Age Josephine: Dancer, Singer — Who’s That Who? Why, That’s Josephine Baker to You! by Jonah Winter, illustrated by Marjorie Priceman

Told in rhyme and accompanied by vibrant illustrations that sing with energy, this picture book tells the story of Josephine Baker by focusing more on her impoverished childhood and her rise to fame as a celebrated dancer who was the toast of Paris. [picture book, ages 4 and up]

Told in free verse with chapter delinating the different periods of Josephine Baker’s life, this advanced picture book can be read as a chapter book. It’s the perfect hybrid of pictures, text and chapters to introduce a child to the fascinating life of an American icon. It would be especially good for a reluctant girl reader who likes to dance. [advanced picture book, ages 7 and up]