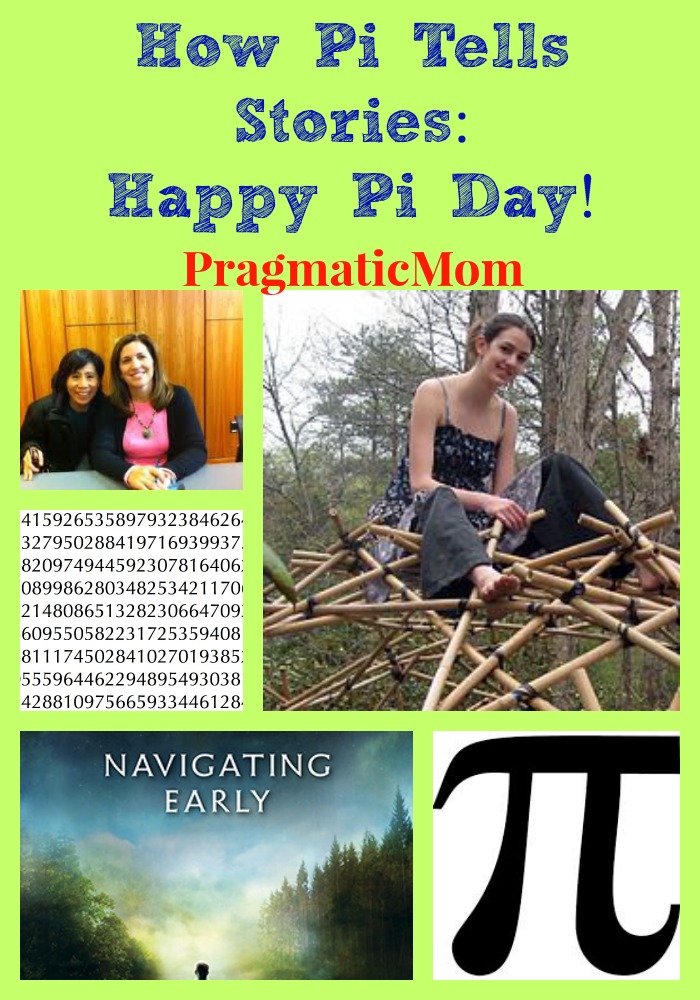 Happy Pi Day! To celebrate, we are going to explore the idea of Pi and storytelling. Can the infinite sequence of the number Pi tell a story? Am I nuts to even think this?

noun: the sixteenth letter of the Greek alphabet ( Π, π ), transliterated as ‘p.’

symbol: the numerical value of pi.

Newbery award winner Clare Vanderpool’s Navigating Early tells a story with Pi. And Vi Hart has a take on Pi and Shakespeare. So It Can Be Done! Let’s explore the stories that Pi tells. Early circled the number one. “This is Pi. And the rest of the numbers are his story. The story of Pi begins with a family. Three is his mother. She is beautiful and kind and she carried him in her heart always. Four is his father. He is strong and good. And here” — Early pointed to the number one in the middle — “this is Pi. His mother named him Polaris, but she said he would have to earn his name.”

from page 31 of Navigating Early

“See, it’s right here that he gets in his boat. These numbers, see how they look wavy, like the ocean?”

“No, they don’t look wavy. They’re just numbers. And you’re making up a story to go along with them. I get it. It’s pretty creative.”

from page 66 of Navigating Early

Clare Vanderpool explains how she got the story idea for Navigating Early from a dream her mother had and the plot of her award-winning chapter book.

Violet and the Pie of Life by Debra Green

From Mixed Up Files of Middle Grade Authors:

“It’s a contemporary middle grade novel with humor and heart, about a math-loving seventh grade girl named Violet Summers who uses charts, graphs, and equations to try to fix her life. She has a lot to calculate after her father leaves and she wins the part in the school play that her best friend wanted. There’s pi, pie, laughs, and a cry.” [middle grade, ages 8 and up]

Vi Hart on Pi Its Relationship to Shakespeare

Victoria Hart, commonly known as Vi Hart, is a self-described “Recreational Mathemusician” who is most known for her mathematical videos on YouTube. Here’s her take on Pi and Shakespeare along with Seven Sonnets that she wrote to explain her premise. Are Shakespeare’s plays encoded within Pi?

The truth is: we don’t know, but we suspect

They’re somewhere in those digits. And now I

Will show why we don’t know if we’re correct.

You see, we think the digits do behave

As if they were a random sequence, and

So many mathematicians tried to brave

This question, but we still don’t understand.

Pi isn’t random: each digit must be

Exactly what the definition states.

It’s pseudo-random, far as we can see,

But it’s the subject of intense debates.

Now I’ll explain, with this parameter:

It’s all in iambic pentameter.

You may have heard of this scenario:

A thousand monkeys type at keyboards ’till

They write the works of Shakespeare.

Even though, In one life it’s a task they can’t fulfill.

If you allow their kids to carry on,

All through the generations working hard,

They will evolve before they come upon

A single sonnet written by the Bard.