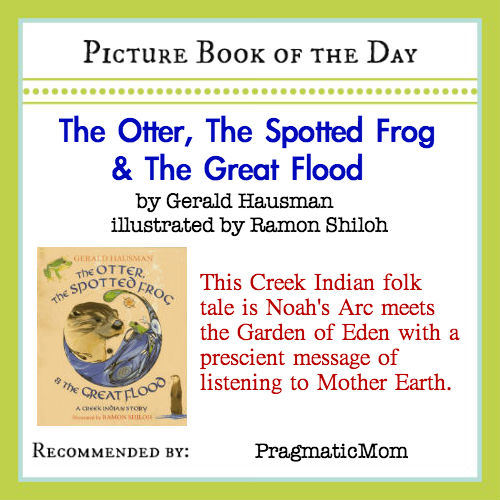 I chose a Creek folk tale today for Picture book of the Day and wanted to explore both the story, its influences, and make connections to learn more about the Muscogee (Creek) people. I hope you enjoy this exploration!

The Muscogee (Creek) people are descendents of a remarkable culture that, before 1500 AD, spanned all the region known today as the Southeastern United States. Early ancestors of the Muscogee constructed magnificent earthen pyramids along the rivers of this region as part of their elaborate ceremonial complexes. The historic Muscogee later built expansive towns within these same broad river valleys in the present states of Alabama, Georgia, Florida and South Carolina.

The Otter, The Spotted Frog and The Great Flood: A Creek Indian Story by Ramon Shiloh

When the spotted frog warns everyone of a great flood that threatens to destroy all life on earth, only Listener the otter takes heed. He builds a raft and ties it to the tallest tree and thus is able to survive. While this picture book is a Creek creation myth, it is interesting to note that the Creek people may also have incorporated Bibilical stories into their own oral tradition. Doesn’t this story remind you a little of Noah’s Arc?

There is another interesting twist after the great flood subsides. Listener the otter turns into a human and you find a reference to Greek Mythology’s Metis story regarding his wife! [picture book, ages 4 and up]

Making Connections to the Creek People

A non fiction companion book would be …

Searching for Sarah Rector: The Richest Black Girl in America by Tonya Bolden

The story centers around a black child named Sarah Rector who lived in the early twentieth-century. Rector’s great-grandmother was a slave owned by Chief Opothole Yoholo of the Creek tribe. When the U.S. government forced Native American tribes off their land onto Indian Territory, their slaves traveled with them.

In 1907, at the age of five, Sarah Rector became a landowner. She had no idea that the land she owned was full of oil, and that by the age of twelve she would become a very wealthy young lady.

Review from The Non Fiction Detectives

If you want to learn more about contemporary Creek Native Americans, read Jingle Dancer by Cynthia Leitich Smith. She is of Creek heritage!

Jenna, a contemporary Muscogee (Creek) girl in Oklahoma, wants to honor a family tradition by jingle dancing at the next powwow. But where will she find enough jingles for her dress?

and here’s a Jingle Dancer …

The 5th graders at my elementary school learn about Native American creation mythology through art. Thanks for reading today’s Picture Book of the Day! 14 thoughts on “Native American Picture Book of the Day Exploration”