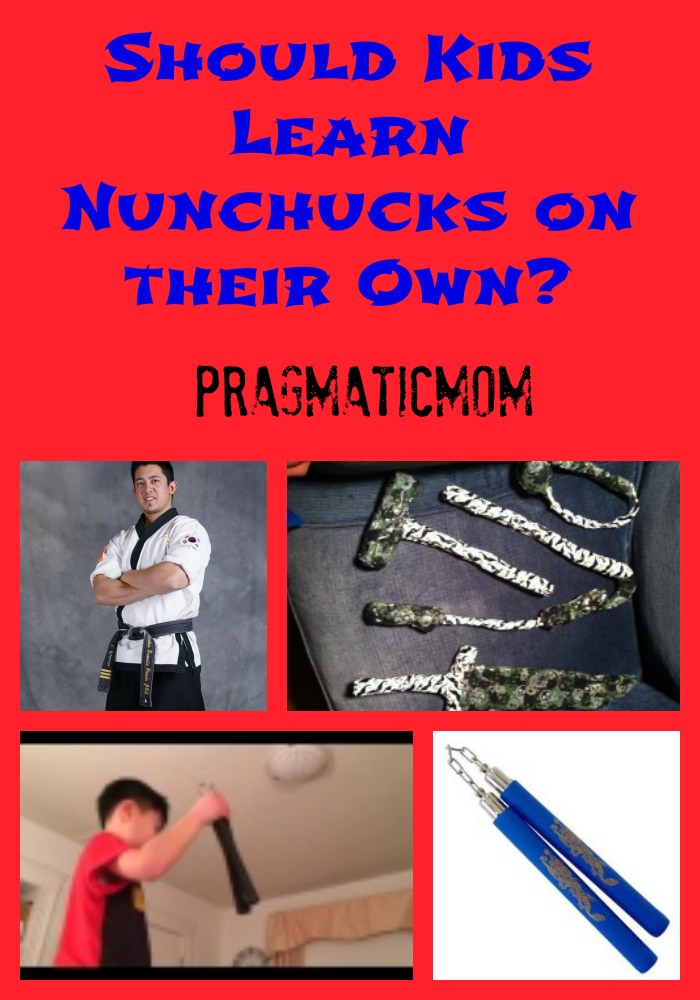 It was a long winter break and I didn’t plan anything special to entertain the kids. After a week of being mostly house bound, out of sheer laziness I took my kids to check out the crafts store, hoping that a few key purchases would keep them entertained and off screens.

My son only wanted two rolls of Duck duct tape so he was easy to please. When he got home, he used aluminum foil and makes what he always makes with duct tape and aluminum foil: weapons. This is the third set of nun chucks he has made, and they were a little short when he went to use them, so I finally asked him if he wanted a real pair. My son’s duct tape crafts from top to bottom: a ball handled weapon, a grappling hook, a hammer,  nunchucks and a sword.

Of course he did.

He had taken a few years of karate but the only weapon Chun Kuk Do uses is the bo staff. Perhaps it was my fault that I perked up his interest in Nun Chucks. I had shown him this video of a Bruce Lee commercial for Nokia playing ping pong using nunchucks.

I steered clear of the nunchaku toys and got one from Ace Martial Arts Supply for $7. It’s for beginners. The nunchucks arrived within a few days. I was happy to see that the nunchucks have puffy foam handles. That shouldn’t hurt if it whacks you in the head!

My son screamed with excitement when he opened the box. He promised that he would not use them as a weapon against his sisters (or anyone) and went to work to practice. But how to learn?

He assured me that he’d find a YouTube video. He used this one:

I asked him if he wanted to take karate again but, no, he didn’t. He just wants to learn how to use martial art weapons but it’s tough to find a class that does’t require you to be a part of their karate school.

So, how do you feel about your kids self learning? How about if it is something like learning to use martial arts weapons? I have to say that I am partial martial arts as I feel it’s part of my kids’ Asian heritage. I am amazed, though, about how successfully you can train using just YouTube videos.

p.s. So it turns out that the video clip of Bruce Lee playing ping pong is a viral hoax. Still, it’s pretty cool!

The video employed a Bruce Lee look-alike actor pretending to play ping-pong against an opponent, their movements sychronized to the sounds of a genuine table tennis match, with the final audio and the visual image of the ball being added to the clip in post-production.

p.p.s. There is no visual trickery to my son’s video LOL! 24 thoughts on “Nunchaku: My Son Teaches Himself Nunchucks”