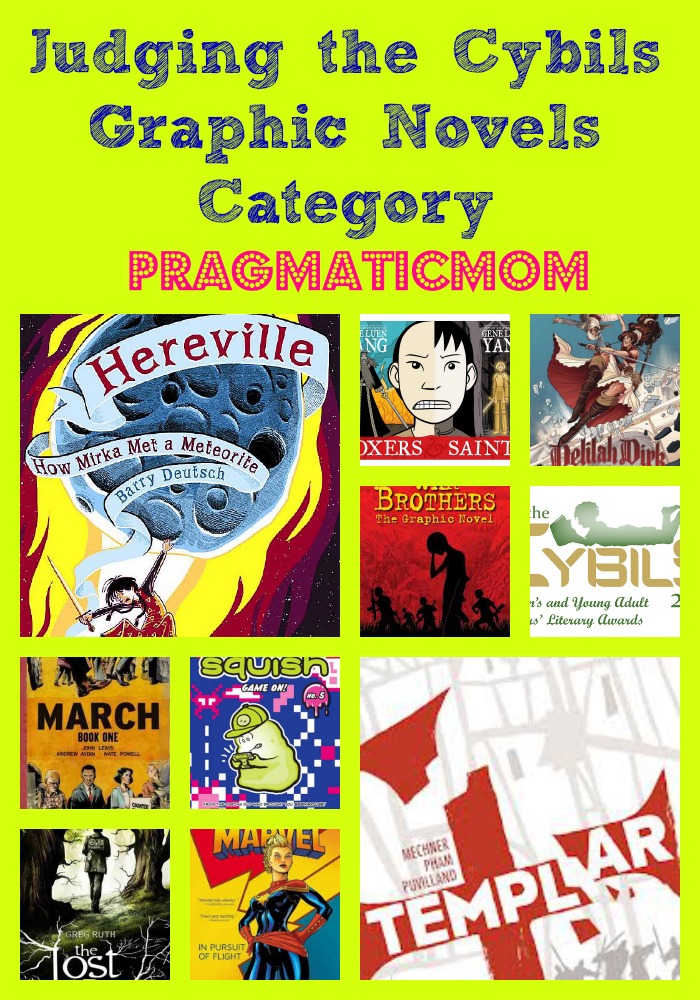 There were so many great graphic novels on the short list for the Cybils, particularly in the Young Adult category! The Cybils do not include honorable mentions so my take is just my own opinion and not that of the Graphic Novel judging committee. I wanted to spotlight a few standouts that are worth hunting down. YA Graphic Novel Notables from 2013

Young Adult Graphic Novel winner, Templar by Jordan Mechner and illustrated by husband and wife team LeUyen Pham  and Alex Puvilland and Boxers and Saints by Gene Luen Yang and Lark Pien both tackled epic historical events where the story is told through imagined characters.

Mechner’s fully developed and complex characters of rogue knights in Templar edged out the Chinese rebels and Christian converts in Boxers and Saints for me. The lush illustrations by Pham and Puvillard brought to life the story of how a small band of renegade knight crusaders regained the lost treasure of the Knights Templar during 14th century France. The Templar story has been widely and successfuly told in other genres but Mechner, Pham and Puvilland have created a version that will bring a new teen audience to this captivating period of history.

The YA Graphic Novel category was really strong this year. Notables include War Brothers by Sharon McKay and Daniel Lafrance about the Ugandan child soldiers; Captain Marvel, Vol. 1: In Pursuit of Flight by Kelly Sue Deconnick, Dexter Soy and Emma Rios which finally gives Captain Marvel the spotlight she deserves; and Delilah Dirk and the Turkish Lieutenant by Tony Cliff which portrays a female “Indiana Jones” heroine.

YA Graphic Novel Winner is Templar!


This graphic novel is a perfectly paced page turner that alternates with action centered on post-Crusades France as the Templar knights are tried for heresy by the king and the relationships of the band of outlaw knights as they struggle to unpuzzle the whereabouts of the treasure while staying one step ahead of their pursuers. In outwitting the King’s men and his villainous advisor, Nogaret, Mechner’s band captures the hearts and imaginations of the reader as the enormnity of their task is revealed. They are noble pawns in a timeless game of politics, power and money.

The Templar story has been widely and successful told in other genres but Mechner, Pham and Puvilland have created a compelling version that will bring a new younger audience to this captivating period of history.

What was it like to judge the Cybils? Very orderly and organized. First we received the finalists list and tried to read as many as possible from the library. What books we could not find were then sent to us by the publishers. I actually found that it’s better to read the books from the library to get them faster since I knew my deadline to finish them coincided with Multicultural Children’s Book Day.

Next we filled out a spreadsheet ranking the books, one for Middle Grade and another for Young Adult. The winner for the Middle Grade graphic novel was clear from the numbers but it was very close for the YA so we held a very civil discussion via email to decide the winner.

I would definitely recommend applying to be a judge for the Cybils. It’s a fun experience and it forced me to read the best graphic novels published in 2013, a task that I relish but wouldn’t have done otherwise! I might apply for a different category and apply for first round next year. There’s no guarantee that I’ll be selected so I might apply for more than one slot.

Are you thinking about judging the Cybils? C’mon, do it! It’s fun! What are your favorite graphic novels from 2013?

The Lost Boy by Greg Ruth

I loved this imaginative tale of two worlds coexisting side by side, separated only by a  portal key that is missing. Nate is a new kid in town who discovers this strange world after unearthing a old tape recorder from under the floorboards of his room. He must solve the mystery of a lost boy from long ago in order to defeat a powerful force that threatens his world. To do this, he must get help from Tabitha, a local girl, and reunite a lost boy with his family.

Hereville: How Mirka Met a Meteorite by Barry Deutsch

Deutsch masterfully crafted a story with a unique perspective. How many stories celebrate an Orthodox Jewish family without making religion the central story problem? Mirka’s restless energy, boundless imagination, and flawed, fierce, relatable personality will connect with kids. The characters that share her journey are fleshed out enough that you get a real feel for their personality. The panels and art are engaging and easy to follow, and even the color scheme helps support the narrative. All of these features make Hereville: How Mirka Met a Meteorite a perfect match for middle grade readers. from The Cybils Awards

This is a powerful true story of Civil Rights icon John Lewis. I am looking forward to Book 2! I have this on my Civil Rights Books for Kids list. Thank you to Jenny of Books Babies and Bows for this link to NPR about March:

That story ­spanning the Congressman’s seven decades, will be told in three books. March is the first.

Till was a 14-year-old boy brutally killed in Mississippi for allegedly whistling at a white woman. His murder received national attention and helped galvanize the civil rights movement. In the graphic novel, we see an image of Till’s mangled body. Drawn from above, after Till has been dragged from the river, Powell makes thin jagged lines of ink to create a sense of human flesh that’s turned into broken twigs.

Lewis says, just like the Martin Luther King comic book that inspired him, March is also a primer on non-violence. The Congressman says this is a lesson he and his co-authors, Aydin and Powell, want to keep alive.

“I remember hearing Martin Luther King Jr. preach from time to time,” says Lewis. “And his father would be in the pulpit. And he would say, ‘Son―make it plain―make it plain.’­ So between Nate and Andrew, they made it plain.”

If kids were to pick a winner, it would be, hand down, Squish #5: Game On. And it’s a good message to gamers about the dangers of too much screen time. A message that my son could bear repeating!