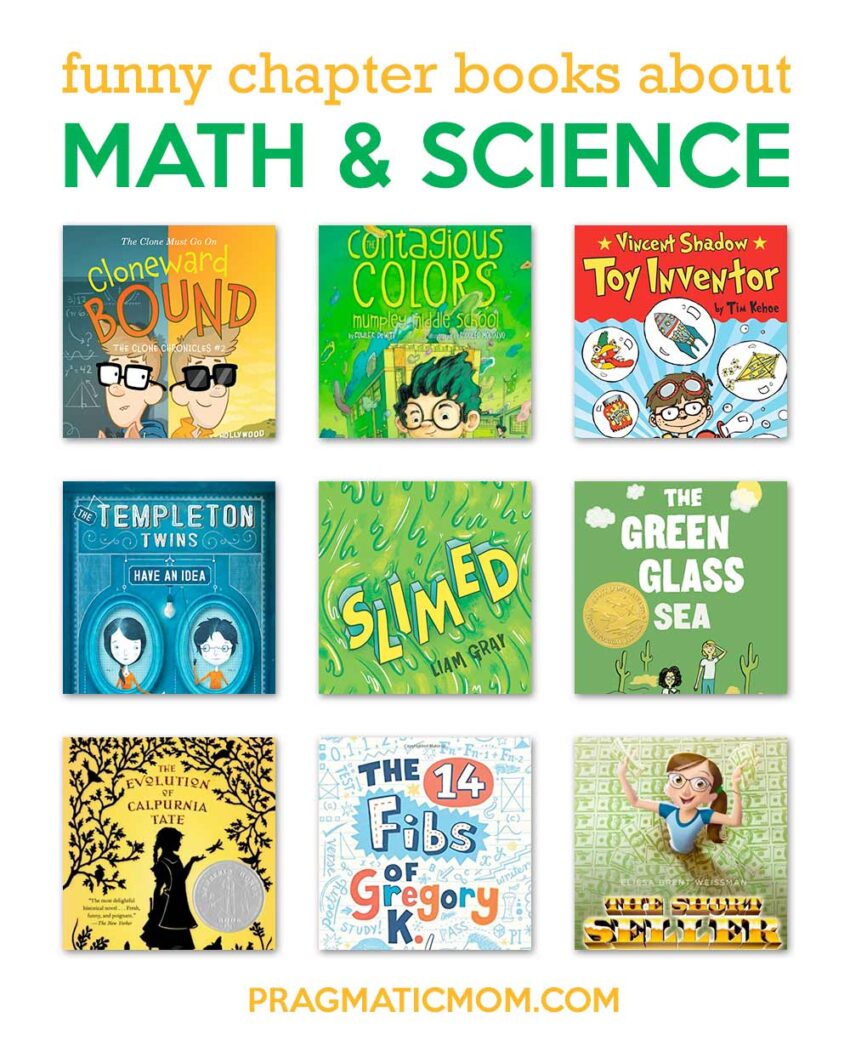 There seems to be a new sub-genre in children’s books that target boys to get them reading. It’s for boys like my own who graduated from potty and underwear humor (ok, maybe they never do!) and still want funny but with a science twist.

This is not to say that these books are science fiction; it’s more like Diary of a Wimpy Kid meets Mad Scientist. In any case, these are fun books to get boys reading. If they like chapter books. And science. And humor. And potty humor never hurts either!

What are your favorite books for boys (or girls!) that are funny but with a science bent? Please share and I’ll keep adding to the list. Thanks!

Fisher’s just in middle school but he has the smarts to clone himself only his clone, Two, isn’t exactly like him. This clone likes the Hollywood limelight. Luckily Fisher’s class trip is to TV show  Strange Science in Hollywood so he has a chance to hunt Two down before everyone finds out about his genetic miracle. Fisher’s high-tech gadget inventions will come in handy to pull this off!

This is a good book for kids who like (or did when they were younger) robots and dinosaurs! [middle grade, ages 8 and up]

Wilmer’s classmates are turning strange colors and patterns and it’s up to him to figure out why it’s happening and how to cure them. And his cure might also help him win the science fair prize from his arch-enemy Claudius Dill! [chapter book, ages 9 and up]

The trailer is funny too!

Daniel’s younger brother Iggy has only been potty trained for a few months but now he’s sporting weird insect-based superpowers. Daniel figures out that this is from the bugs Iggy digested from the new neighbor kid’s insect collection. Only he learns that his new neighbors are aliens from another planet who might know how to cure Iggy. [chapter book, ages 7 and up]

11-year-old Vincent gets blackouts during which he envisions fantastic toy creations. He’s like a Willy Wonka of toy invention except with an unusual invention process. There’s also a Cinderella element to Vincent’s story. His deceased mother was an artist who helped Vincent create a secret laboratory. Now that his father remarried with three step kids, Vincent feels mistreated and spends most of his time hiding out there. When Vincent hears about a competition by famous toymaker Howard G. Whiz, he’s determined to win the prize of a summer job which will give him a break from his family. [middle grade, ages 8 and up]

The Templeton Twins: Have an Idea Book 1 series by Ellis Weiner

The Templeton kids are 12-year-old fraternal twins, a boy and girl named John and Abigail Templeton, with a genius inventor father. There is another set of evil adult twins, Dean D. Dean and Dan D. Dean, who want their dad’s inventions and resort to kidnapping the Templeton twins and their dog to accomplish this.

This series is narrated in a delightfully snarky but funny way reminiscent of Lemony Snicket’s A Series of Unfortunate Events. If you like that style of humor, this series would be a good fit! [middle grade, ages 8 and up]

“This was a fun, goofy romp with plenty of positive aspects of science. I loved when Sam pointed out to Billy that he was making hypotheses, observations, and conclusions based on data. Adults turning into zombies is always fun. The gross details about the soup and slime add to the interest, and I liked the secrets about Billy’s grandmother’s past. The ending seems to leave this open for a sequel.” [middle grade, ages 8 and up]

And now we segue into a more serious mood. These chapter books also have science-y themes in them but are not humorous. Would a kid who likes funny science-y chapter books like these too? I think that depends. Perhaps at different ages? Still, these are all great reads and worth presenting to kids who like potty humor.

It’s 1943, and eleven-year-old Dewey Kerrigan is en route to New Mexico to live with her mathematician father. Soon she arrives at a town that, officially, doesn’t exist. It is called Los Alamos, and it is abuzz with activity, as scientists and mathematicians from all over America and Europe work on the biggest secret of all–“the gadget.” None of them–not J. Robert Oppenheimer, the director of the Manhattan Project; not the mathematicians and scientists; and least of all, Dewey–know how much “the gadget” is about to change their lives.

While this book is historical fiction-ish about the creation of the atom bomb, this chapter book hones in on the story from the point of view of an 11-year-old girl who is sent to live with her mathematician father and has a science talent of her own. The story focuses more on her life, and as a middle-school-age girl, means relationships and popularity. The atom bomb is really a backdrop to a coming of age story of Dewey Kerrigan and the new friends she makes. [middle grade, ages 9 and up]

The Evolution of Calpurnia Tate by Jacqueline Kelly

11-year-old Calpurnia Tate lives in Fentress, Texas (near Austin) in the year 1899. At this turn of the century, things are changing even in small-town Fentress. Calpurnia’s grandfather is at the forefront of this change, and he embraces it as a naturalist scientist and early member of the National Geographic Society. Calpurnia gravitates towards her grandfather learning about science and keenly observing all around her. But one thing she does notice, besides the flora and fauna, is that girls are expected to marry and keep house, and not go to college. Calpurnia’s evolution is to test this theory of homemaking versus college for girls. But anything is possible at the start of a new century, or is it? [middle grade, ages 9 and up]

“Maggie and her brother Ezra are living with their grandmother in her trailer after their father has lost his job as a lab assistant at the Vitaccino corporation in town. He’s taken a job as a park ranger at Yellowstone, and Maggie misses him. Her mother left at some indeterminate point in the past and is not much missed. Maggie wants to take a great picture and submit it to the Junior Naturalist Merit Award being offered by the corporation; she wants to win, and use this leverage to get her father his job back. She enlists her friend Nate to help. After seeing an odd moth and missing a picture, she hears that there are weird “ghost lights” out by Old Man Bell’s house, so she and Nate sneak out one evening to look. Ezra runs into them, and he and a friend also go to see what’s up. Instead of ghost lights, they find bioluminescent mushrooms that seem particularly suspicious, and they also have a run-in with Old Man Bell… Things get heated very quickly, especially since the local police don’t believe Maggie because they are infected. Maggie contacts her father for help, since she has exhausted all other options, and the only information he can give her is that she might be able to fight the fungus with a bacteria. Luckily, she and Nate are indefatigable, have good research skills, and can stomach strong smells, but will they be able to save the day?” [middle grade, ages 9 and up]

The 14 Fibs of Gregory K. by Gregory Pincus

Gregory K comes from a seriously math-y family. His obnoxious older brother won the citywide math competition but Gregory actually likes writing. Poetry to be specific! Now that his best friend Kelly is moving away, author camp is their only time to spend together but Gregory ends up committing to the math competition instead and lying to everyone around him.

It’s the Fibonacci numbers that solve Gregory’s dilemma. They inspire Gregory’s math competition entry but he gets to do it his way, in the form of poems. And maybe these Fibs can help him untangle his problems with his family and his friendship with Kelly! [chapter book, ages 8 and up]

For kids who are interested in playing the stock market, this would be a good introduction.

It all starts when seventh-grader Lindy Sachs is granted $100 and access to her father’s online trading account as a way to alleviate her boredom while she’s home sick from school.

Lindy learns something immediately—she is very, very good at e-trading. Her $100 becomes $200. Then $400. And more. With trading talent and access to her parents’ savings, the opportunity to make some real dough is too tempting to pass up. In fact, given how well Lindy’s stocks are doing, it would be a disservice to not invest it all… Right? [chapter book, ages 8 and up]

What Do We Do All Have Day? has a wonderful list of Math Chapter Books and Story Collections.

The Monster in the Mudball (Artifact Inspector) by S. P. Gates

Jin’s grandmother has an artifact from her native Africa, a mudball that is actually a slumbering monster called Zilombo, on the top of her wardrobe. When his little brother drools on it, the moisture sets it free. Thankfully the Chief Inspector of Ancient Artifacts, Mizz Z, has arrived to help subdue Zilombo before it can eat its favorite prey, babies … and Jin’s baby brother is in its clutches!

This is a good example of everyday diversity; it just so happens that there are multi-racial characters but that is not really the point of this action-adventure book. [middle grade, ages 9 and up]