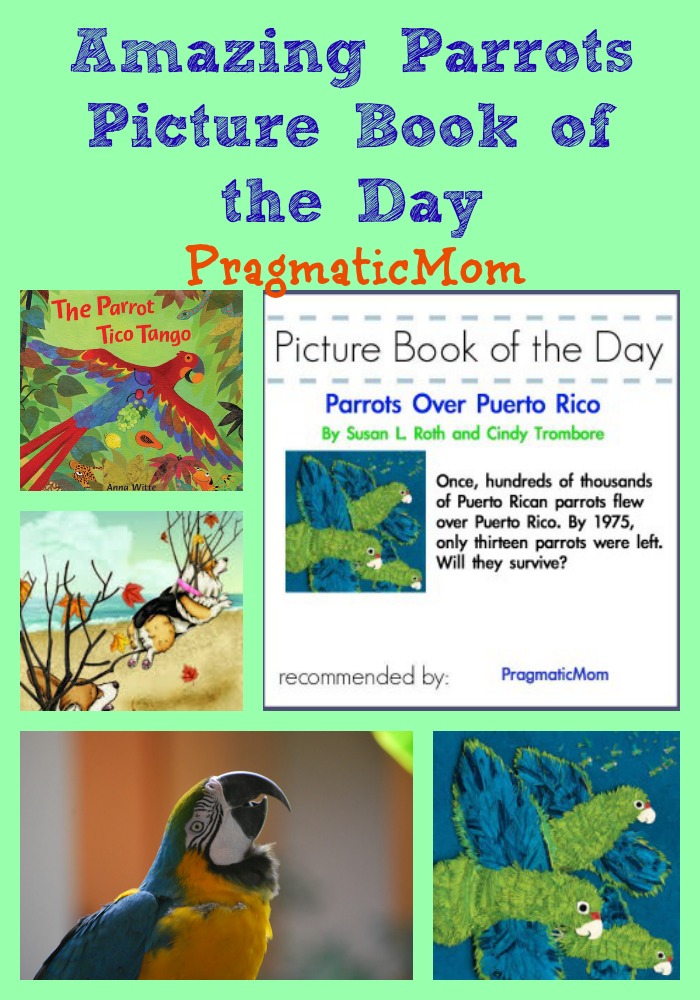 It’s my turn to choose the Picture Book of the Day and I picked the 2014 Seibert Winner, Parrots Over Puerto Rico. I thought we’d explore parrots today with a non-fiction picture book, a singalong parrot picture book and an easy reader with a naughty parrot.

Next, I clear up confusion that I have about parrots versus Macaws versus Cockatoos. This will help because I want you to meet some parrot friends. Finally, I am giving away all three books! I hope you enjoy this little parrot adventure! Please share your favorite parrot books!

Picture Book of the Day

Once, hundreds of thousands of Puerto Rican parrots flew over Puerto Rico where they had lived for millions of years. But by 1937, only about two thousand Puerto Rican parrots, known locally as iguaca, remained in El Yunque, a tropical rainforest in the Luquillo Mountains to the east. By 1975, only thirteen parrots were left. Thanks to efforts by conservationists, a recovery program was set up. But with challenges from mother nature including thunderstorms and hurricanes, will the iguaca survive?

Parrots Over Puerto Rico is the 2014 Seibert Winner! Here’s a fun parrot picture book to sing along with. [picture book with CD for ages 1 and up]

Izzy and Poe by Anita Felicelli, illustrated by Lindsay Merrill

Izzy and Poe play at the beach seeking adventure when they meet Captain Jack, a parrot who convinces them that they can fly. [early reader, ages 4 and up]

I was a little confused about parrots versus macaws — I thought they were the same so I did a little research.

Parrots are a very large group of birds (Order: Psittaciformes) that include Parakeets, Cockatiels, Lovebirds, Lorries, Macaws, Amazons, and Cockatoos.

What is the difference between Macaws and Parrots?

• Macaws are a type of parrots while parrots are a very large group of psittaciformes including many types of attractive birds.

• The diversity is very high among parrots with over 370 species while there are only 18 species of macaws.

• Macaws are naturally distributed in the tropics and near tropics of North and South American continents, whereas parrots are found all over the world except Antarctica.

• Macaws are mainly tropical or subtropical birds while there are some parrot species living in temperate climates.

I met these fine feathered friends at a resort in Hawaii where they hung out in the lobby. Even though budgerigars are typically called parakeets, especially in the United States, they are just one of over 100 species commonly referred to as parakeets, a widely diverse class of tiny, slender parrots spread out over more than a dozen genera in the subfamilyPsittacinae of the family Psittacidae…

There are more than five million budgies in the wild today. In the wild, budgies are generally a lot smaller than their captive counterparts. As nomadic birds, they stick to open habitats like scrublands, woodlands and grasslands in dry parts of Australia, and they have inhabited this part of the world for more than five million years. The availability of water and food determines where they go. from Budgerigar

And have you wondered if birds can dance? Meet Snowball, the internet sensation. Snowball  is a male Eleonora Cockatoo, noted as being the first non-human animal conclusively demonstrated to be capable of beat induction — perceiving music and synchronizing his body movements to the beat (i.e., dancing). from Wikipedia

I am giving away all three books. To win please enter the Rafflecopter!

a Rafflecopter giveaway
To examine any book more closely at Amazon, please click on image of book.