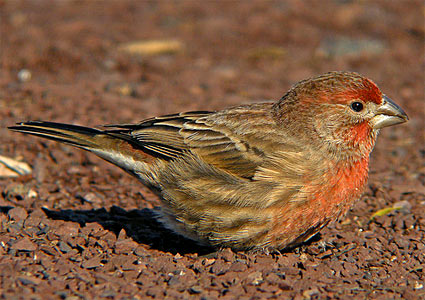 Please welcome my guest blogger, Anna Olswanger. I “met” her when I read a review of Greenhorn and her picture book stopped me in my tracks. It’s powerful story about the Holocaust that really reverberated.  I literally could not stop thinking about that little boy and his tin box for days. I added it immediately to my 34 Haunting Holocaust Books for Kids list.

It doesn’t surprise me that Anna notices the little details in life around her. Her story today is about the little House Finch birds that come to her bird feeder that she notices from her window during writing breaks from her computer. She notes with concern that they are sick.

I looked it up:

Infected birds have red, swollen, watery, or crusty eyes; in extreme cases the eyes become swollen shut or crusted over, and the birds become essentially blind.  If the infected birds die, it is usually not directly from the conjunctivitis, but rather from starvation, exposure, or predation as a result of not being able to see. Some infected birds do recover.

It’s strange that conjuctivitis which kids commonly get is a very infection disease but really a nuisance more than anything, but for a House Finch, it can be lethal.

Here’s her story and my prayers that her House Finch friend is ok!

The house finch sat on the feeder outside my window and coughed. She was brown, a female. I read about her red, swollen eyes on the Web and discovered she had a respiratory disease that had infected her eyes. In extreme cases, the eyes of these birds would become swollen shut and the birds would become blind. They would die from starvation or predation because they couldn’t see. Some of the other house finches who came to my feeder also had the disease. Another female house finch once sat on my kitchen window ledge, alone, and breathed with difficulty. She sounded as though she were wheezing. Then one day, she was gone. A male, a beautiful orange-red bird with slightly red, swollen eyes hopped around on the window ledge to find bits of nyjer seed, never up to the feeder. And then one day, he was gone, too.

One after another, in the late fall, first the finches who were healthy, and then the finches who had eye disease, were gone. Now it was this last little house finch, alone on my feeder. She came during the day and sat on top of the feeder and watched until the sparrows left. She landed on the feeder and ate her fill. She swung her head out and back, out and back, looking to see if a sparrow were coming. If a sparrow landed on the window ledge, she immediately hopped off the feeder. She didn’t like being chased away.

She came back regularly the half hour before sunset. I loved watching her sit on the top of the feeder, her eyes closed from the disease but sitting there, as though she were basking in the slanted afternoon sunshine. I loved the curve of her little chest. She was tiny, smaller than the other house finches, much smaller than the sparrows. She was no match for them physically, but she knew how to be patient. She sat in a nearby tree and waited until they flew away for the night, and then she would come. I would hear her squeak before she came. That was my alert. I loved knowing she was getting her fill of seed.

The last few days, I had been putting herbs in her drinking water. She would eat at the feeder, hop down to the cup of water on the window ledge, sip, and fly back up to the feeder. I was convinced that her eyes were healing. Her eyes had been constantly closed, but now they were open, less red. I thought she might stay, grow more healthy, that I would be able to watch her throughout the winter.

But then she was gone, too.

I didn’t get to tell her good-bye. I didn’t get to tell her that one human had noticed her, that she had drawn me from my desk and computer, enticed me to look out the window at the trees and at the sky between the trees, to listen for her squeaking voice, to care about the fate of one tiny bird, and to discover that every creature, however small, wanted to live.

I didn’t get to tell her any of that.

Maybe she didn’t die. Maybe she flew to a warmer area with the other house finches. Maybe she will be back next year.

Maybe then I will be able to tell my little house finch good-bye. Anna Olswanger is a literary agent with Liza Dawson Associates and the author of the children’s books Shlemiel Crooks and Greenhorn. A vegan and advocate of kindness to animals, she wrote this essay about the house finch on her window ledge on the day she saw the little bird for the last time. Anna is the agent for two children’s books that champion humane treatment of animals: Jasper’s Story: Saving Moonbears by Jill Robinson and Marc Bekoff, and the forthcoming A Boy and a Jaguar by big cat conservationist Alan Rabinowitz. For more information about Anna, visit her website www.olswanger.com.

In Anna Olswanger’s Greenhorn, a young Holocaust survivor arrives at a New York yeshiva in 1946 where he will study and live. His only possession is a small box that he never lets out of his sight. Daniel, the young survivor, rarely talks, but the narrator, a stutterer who bears the taunts of the other boys, comes to consider Daniel his friend.

The mystery of what’s in the box propels this short work, but it’s the complex relationships of the schoolboys that reveals the larger human story. In the end, Aaron, the stutterer, finds his voice and a friend in Daniel, and their bond offers hope for a future life of dreams realized, one in which Daniel is able to let go of his box.

Greenhorn is a powerful story that gives human dimension to the Holocaust. It poignantly underscores our flawed humanity and speaks to the healing value of friendship. Families will want to read Greenhorn together.

Shlemiel Crooks is the story of Reb Elias and the thieves who try to steal his Passover wine. Based on a true story about Anna’s great-grandfather Elias Olschwanger, Shlemiel Crooks is an imaginative introduction to the history of Passover, as Pharaoh and a town of Jewish immigrants play tug-of-war with wine made from grapes left over from the Exodus from Egypt. In Yiddish-inflected English, punctuated by colorful curses, the language of a Jewish community of another time comes alive for readers of all ages. Shlemiel Crooks is a Sydney Taylor Honor Book and PJ Library Book.

image of House Finch from All About Birds

To examine Greenhorn or Shlemiel Crooks more closely at Amazon, please click on image of book.