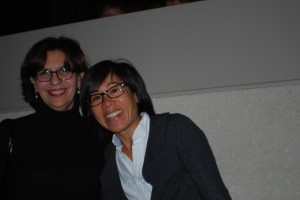 I’m thrilled to be posting on behalf of Social Mom’s Choose Kind campaign featuring one of my favorite chapter books on the planet! I met R. J. Palacio at a Understanding Our Differences event in Newton and found her to be, not surprisingly, a wonderfully compassionate and kind person. Author R. J. Palacio’s life changed forever from a trip to an ice cream shop. She was with her two sons; one a toddler in a stroller and the other old enough to go inside to buy chocolate milk shakes for them. It was outside waiting for her son to return that she saw a little girl with her mother who has Treacher-Collins syndrome, a rare craniofacial deformity.

Because her son in the stroller was waking up and nervous that he would say something loud and embarrassing, she rushed to leave. Unfortunately, her son with the milk shakes was jostled in the process and the three milk shakes ended up splattered all over the ground. Not exactly a quiet exit.

That night, R. J. started writing on post it notes. It was the beginning of Wonder!

After being home schooled all his life, 10-year-old August Pullman is starting 5th grade at a private middle school in his Upper East Side neighborhood. He wonders if anyone will realize that he’s just a normal kid underneath his disfigured face, an affliction he was born with. His middle school classmates are challenged to “be kinder than is necessary” but can they? Will they? In this uplifting story, it turns out that everyone carries some kind of disfigurement that feels isolating, even though most can’t be seen. We cheer for Auggie, as we are moved to tears, that kindness can indeed change the world. Warning: this chapter book teaches compassion. [chapter book, ages 9 and up]

Told from many points of view, Wonder manages to pull readers into Auggie Pullman’s world and view things from his perspective. He might look different, but he’s just like any other 5th grade boy. Or is he? He manages to inspire those around him into a better version of themselves.

As for readers, we all leave feeling that, of course, we would be the one to accept Auggie Pullman. And you know what? I bet the next time any reader has the chance to meet an extraordinary child, we WILL be that person who can look past a special need to see the person inside. This is the kind of chapter book that changes you forever! If you are looking for a holiday gift, Choose Kind!

Auggie (August) Pullman – He’s a 10-year-old fifth grade boy with a facial deformity who is entering 5th grade private school after being homeschooled.

Via (Oliva) Pullman – His older sister is overprotective of Auggie but also trying to find her own identity in high school.

Justin – Via’s boyfriend who realizes that all of us have some kind of deformity but most are hidden inside of us.

Summer Dawson – Auggie’s first real friend who is able to see past his deformity. She’s inspired by a real person.

Miranda – Via’s former best friend who loves Auggie but has drifted away from Via.

Jack Will – Auggie’s best friend at school who is conflicted about his friendship with Auggie.

I am excited to be co-hosting a Twitter party of behalf of Wonder! To win signed copies of Wonder and twenty $20 gift card prizes, please go here to Social Moms to RSVP.

We hope you can join us as we talk about the importance of being kind to others! You’ll be entered for a chance to win prizes just by participating during the party. Also, we will have a special guest attending, so you don’t want to miss out on the fun! Please make sure you follow @socialmoms, @pragmaticmom and @randomhousekids on Twitter before the party!

R. J. PALACIO lives in New York City with her husband, two sons, and two dogs. For more than twenty years, she was an art director and graphic designer, designing book jackets for other people while waiting for the perfect time in her life to start writing her own novel. But one day several years ago, a chance encounter with an extraordinary child in front of an ice cream store made R. J. realize that the perfect time to write that novel had finally come. Wonder is her first book. She did not design the cover, but she sure does love it.

Connect with her on Tumblr, Twitter, and at RJPalacio.com.

This blog post is part of a paid SocialMoms and Wonder blogging program. The opinions and ideas expressed here are my own.