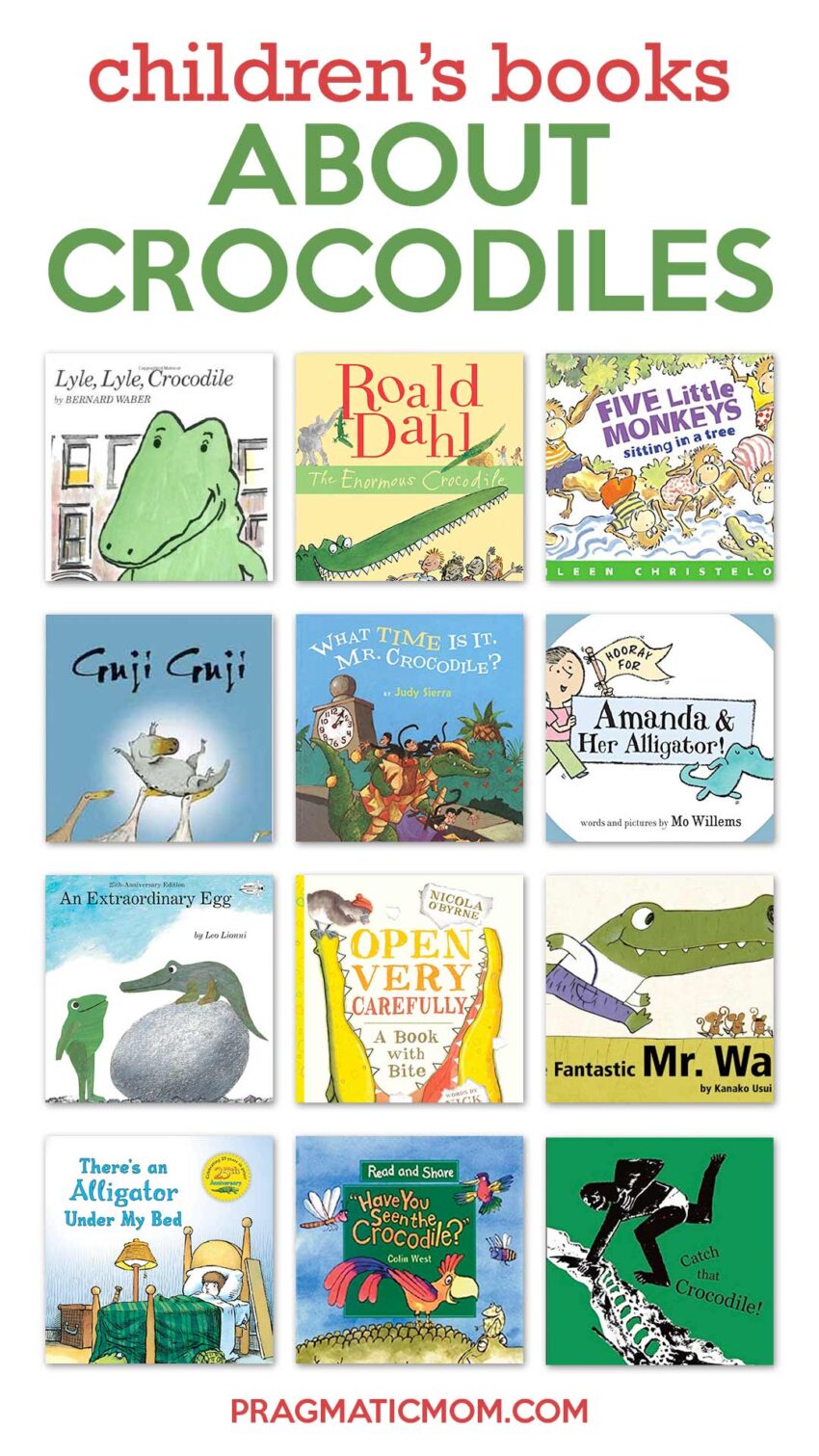 The wolf was very nearly driven to extinction through hunting. I can’t help but wonder if children’s literature has a role to play in portraying wolves as “bad guys.” Thankfully, due to human intervention including breeding programs and reintroduction programs, the wolf is making a comeback.

So, I wondered how crocodiles were portrayed in children’s books and if there is a balanced view of crocodiles. Are they “good guys” or “bad guys”, tricksters, foes or friends? But one thing is for sure, they have been around for a very long time.

Crocodiles , including the rest of Crocodylomorpha, have been around for at least 225 million years, survived multiple mass extinctions, but today, due to habitat destruction and poaching, many species are at the risk of extinction, some being classified as critically endangered.

The news isn’t great for crocodiles. After surviving 225 million years, many species are in danger of extinction. And it seems that we and our children will determine if these hardy genetic marvels will survive or die out. In honor of the crocodile, let’s examine how they are portrayed in children’s books, and let’s hope there are enough warm fuzzy ones to inspire some kids out there into saving them.

Let’s start with a beloved and extremely popular crocodile, Lyle. Thankfully, he has won the hearts of all he meets near his home on East 88th street including the Primm family who found him soaking in their bathtub. Lyle is portrayed as a polite and helpful crocodile with a gentle disposition that challenges the reader to get to know crocodiles before judging them. [picture book, ages 4 and up]

9. The Enormous Crocodile by Roald Dahl

The message here is that rude crocodiles get what they deserve which is to say that they ended up crashing headfirst in the hot hot sun whereupon they sizzle up like a sausage. [advanced picture book, ages 6 and up]

Here’s another review from Stacking Books.

8. Five Little Monkeys Sitting in a Tree… by Eileen Christelow

Monkeys versus crocodiles? Is the monkey common prey for the crocodile? First, the Enormous Crocodile tries to eat Muggle-Wump the Monkey and now the five little monkeys are in danger though they really are not supposed to be playing in the tree! If only they minded their mother! [picture book, ages 1 and up]

Crocodiles eat fish, amphibians, birds and mammals such as monkeys, pigs and deer. Due to their strength crocodiles have no predators. Nevertheless, their eggs and hatchings are preyed on by various animals including baboons, marabou storks, hone badgers, white tailed mongooses and other carnivores and omnivores.

To debunk any myths, I looked it up. Yes, crocodiles do eat monkeys but here’s an interesting twist. Monkeys eat crocodile eggs and hatchlings!

Speaking of eggs and crocodiles, Guji Guji is a delightful picture book about a mix-up — The Ugly Duckling style! But in this case, the crocodile named Guji Guji has no body image problems. But when asked to serve up his duck family to a trio of bad crocodiles who inform Guji Guji that ducks are their natural prey, he has his own idea of what to do. Here the crocodile is shown to have a conscience with creative problem-solving skills. This is also a book about acceptance and tolerance for those who are different. I like that message a lot!  [picture book, ages 4 and up]

6. Catch That Crocodile! by Anushka Ravishankar

A simple story about a crocodile who shows up unexpectedly in a village. Only little Meena knows what to do. The illustrations are two color block prints that give this picture book its quirky appeal. [picture book, ages 2 and up]

5. What Time Is It, Mr. Crocodile?by Judy Sierra

Monkeys versus crocodiles again. Honestly, I would have thought that the monkey with its quickness and climbing ability would be the toughest prey for the crocodile to go after. Nevertheless, notice a theme with these crocodile books? Maybe it’s because they are natural adversaries, both with cunning? Or the monkey is the closest animal to humans who are also natural prey for the croc. (You’ve seen Crocodile Dundee, haven’t you? I rest my case.)

4. Hooray for Amanda & Her Alligator! by Mo Willems

Amanda’s alligator is stuffed and they have a very sweet friendship full of surprises. Amanda reads to her alligator and he surprises her by sometimes eating her books. But there are more surprises and it turns out that reading will ensure her alligator will never be bored again.

If anyone can convince you to befriend an alligator, it would be Amanda in this book! Even if the alligator is stuffed! [easy chapter book, ages 4 and up]

3. An Extraordinary Egg by Leo Lionni

Do crocodile eggs get mixed up frequently? They seem to be in children’s books! Lionni’s tale features three frogs on Pebble Island who discover an egg and decide it must be a chicken egg even though they’ve never seen one. When the egg hatches and a long green thing emerges, they naturally call it a chicken. Mistaken identity has never been so funny! [picture book, ages 3 and up]

2. Open Very Carefully: A Book with Bite by Nick Bromley

This clever picture book features a crocodile who has fallen into this book and is eating his favorite letters “O’s” and “S’s”. The poor croc is just trying to get out the book and the ugly duckling isn’t helping! [picture book, ages 3 and up]

Mr. Wani the crocodile is a kind of Mr. Magoo in this charming picture book. As he rushes about to make the party, he causes all kinds of havoc. The mice come up with a good idea of using balloons to speed up his travel but that doesn’t seem to work out. He helps the penguins out after accidentally destroying their sled by becoming their sled, but it’s a pretty tough landing. This silly and fun picture book gets my vote because the crocodile is not subjected to stereotyping. He’s just a goof trying his best not to be tardy for the party! [picture book, ages 2 and up]

Here are a few more alligator and crocodile books for kids. What did I leave out? Please add your suggestion!

There’s An Alligator Under My Bed by Mercer Mayer

The nightmare’s gone, but what about that alligator? You have to be so careful getting in and out of bed! Maybe a midnight snack to lure him into the garage will do the trick. In this funny and beloved follow-up, Mercer Mayer faces another nighttime fear head-on. [picture book, ages 2 and up]

When a strange egg appears in their nest, Mr. and Mrs. Bird kindly take it upon themselves to raise the “baby bird” inside. But when the egg hatches, the Birds are in for a big surprise–“Junior” is the oddest-looking baby bird they’ve ever seen–with big, long jaws full of teeth and an appetite to match. In fact, he looks more like a baby alligator than a baby bird! Nevertheless, the devoted Birds run themselves ragged feeding Junior until he gets so big, he must leave the nest or it will collapse underneath him. But how can Junior fly without wings? To the delight of the Birds–and readers!–the dilemma is solved when Junior takes off from a branch overlooking a pond. [picture book, ages 2 and up]

Thank you to Catherine of Story Snug for this great recommendation. Her review is here.

Have You Seen the Crocodile? by Colin West

Thank you to Cathy of Bildebok.

The Watermelon Seed by Greg Pizzoli

With perfect comic pacing, Greg Pizzoli introduces us to one funny crocodile who has one big fear: swallowing a watermelon seed. What will he do when his greatest fear is realized? Will vines sprout out his ears? Will his skin turn pink? This crocodile has a wild imagination that kids will love.

Thank you to Kris of Over There to Here for her great suggestion!

Crocky Dilly tells the story of her famous relative who rescued Menes, the King of Egypt, and was rewarded by being named queen of her own city, Crocodilopolis.

I’d Really Like to Eat a Child by Sylviane Donnio

A scrawny little crocodile wants the opportunity to bite off more than he can chew. He’s tired of bananas; today he’d like to eat a child. But he’s smaller than he thinks, and the little girl he chooses for his first meal puts him in his place—she picks him up and tickles his tummy! The little crocodile is going to have to eat a lot of bananas and grow a lot bigger before he can add children to his menu! Simple yet hilarious artwork brings this droll story to life.

Kriss from Over There to Here had a great suggestion on Google +, Tick Tock the crocodile from Peter Pan!

Erica from What Do We Do All Day? said her favorite book is

CultureBaby says, “We really like The Selfish Crocodile for toddlers. All about a croc who hogs the river until he gets a toothache and a little mouse helps him, and he sees the value of sharing and friendship.”

The Selfish Crocodile by Faustin Charles

Book Lists Around a Particular Animal