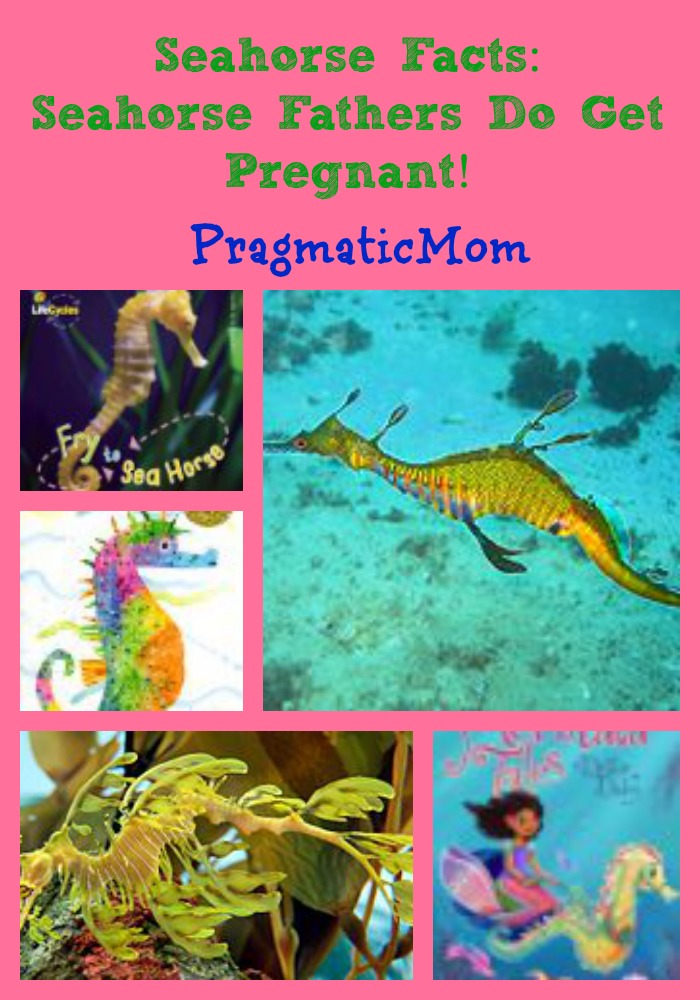 Do you think seahorses are magical too? There is something about having a head like a horse, a tail like a monkey, and skin color that can change like a chameleon. It doesn’t surprise me that Poseidon is the father of horses in Greek Mythology!

Did you know that father seahorses hatch the eggs?! Male seahorses have special pouches for the eggs and part of the courtship routine to win a female includes inflating their pouch by pumping water through it to display its emptiness in order to entice the female to deposit her eggs in it.

The eggs develop in the pouch for two to six weeks, depending on species and temperature, until they become fully formed juveniles called fry. When the male seahorse is ready to give birth, he has muscular contractions to expel the young from the pouch. I wonder if the contractions are as painful as human ones?

Newborns measure between two and twelve millimetres, depending on species. The number of young produced ranges between 100 and 200 for most species, but can be as low as 5 for the smaller species, or more than 1,500 for larger species. from The Seahorse Project

There is amazing biodiversity of seahorses too because camouflage plays an important part in the ecology of the seahorse. Did you spot the seahorse?  What do you think this seahorse resembles? This is the Leafy Seadragon.

How about this seahorse? What do you think it look like? This is the Weedy Seadragon. The weedy seadragon (Phyllopteryx taeniolatus) is found off the coast of Australia and looks like a cross between a kangaroo, a seahorse and a bit of seaweed.

There are only 35 known species of seahorses and they mostly reside near Australia, China and the Phillipines. But they magical appearance also puts them in danger since they are sought after as medicine and souvenirs. They are also sold for aquariums in North American but most these seahorses are juveniles where they usually die within a short period.

Want to learn more about seahorses or do a home study unit? Try A Seahorse Lifecycle: Father Knows Best!  from Monterey Bay Aquarium.

Mr. Seahorse truly becomes pregnant. Mrs. Seahorse lays her eggs in Mr. Seahorse’s belly and he takes care of them. He’s not the only father on duty. Mr. Tilapia carries his babies in his mouth. Mr. Kurtus keeps his babies on his head and Mr. Catfish watches his babies. This is the perfect first picture book to learn about seahorses! [picture book, ages 2-6]

Dadey’s Mermaid Tales series focuses on the relationships between the young mermaid girls at Trident Academy but this one slips in a pet seahorse and whether or not they are happier swimming freely. It’s a subtle way to draw girls into science! [easy chapter book, ages 6 and up]

Are Crabs Crabby? And Other Egregious Misconceptions

Will Jellyfish Take Over the Oceans?

6 Books on Light Pollution and the Night Sky

20 thoughts on “All About Seahorses: Seahorse Fathers Do Get Pregnant!”