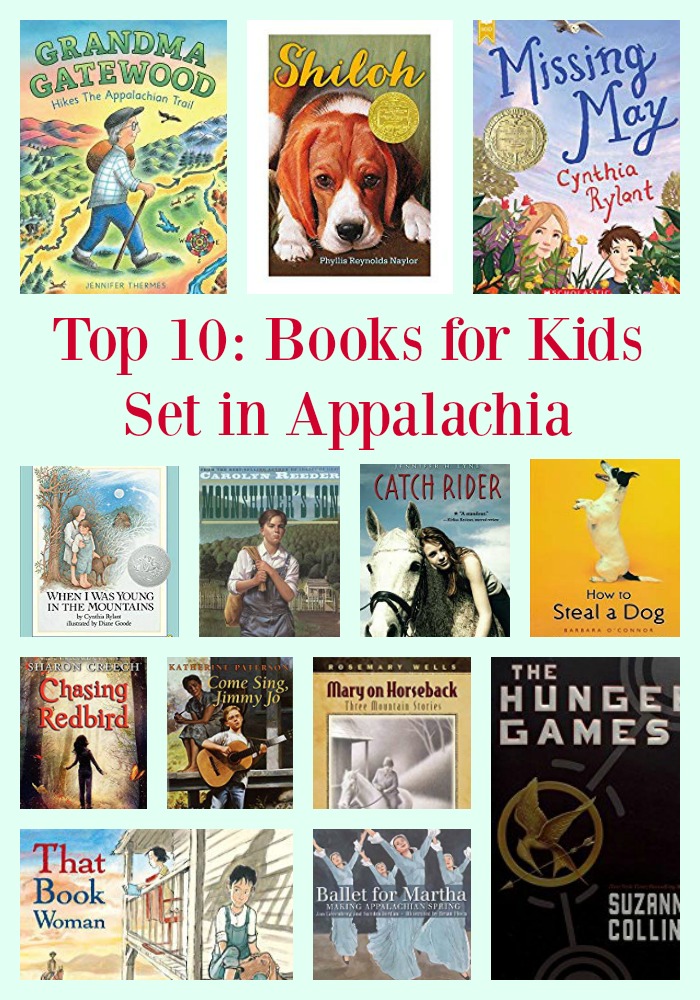 I remember when I received my first letter from my soon-to-be college roommate. I looked at the envelope and tried to fathom where she was from. WV. What state was WV? I had no idea. I had to look it up.

WV: her postal code state, stood for West Virginia. It was my first encounter with Appalachia. (Yes, I led a pretty sheltered childhood and did not travel much!).

I learned snippets about her region from living with her.

The stories of Appalachia are often sensationalized around moonshine, clan feuding, coal mining and poverty so. While endowed with abundant natural resources, Appalachia has long struggled with and has been associated with poverty and the region itself lacks specific defining boundaries. The region defined by the Appalachian Regional Commission currently includes 420 counties and eight independent cities in 13 states, including all of West Virginia, 14 counties in New York, 52 in Pennsylvania, 32 in Ohio, 3 in Maryland, 54 in Kentucky, 25 counties and 8 cities in Virginia,29 in North Carolina, 52 in Tennessee, 6 in South Carolina, 37 in Georgia, 37 in Alabama, and 24 in Mississippi.

In creating this booklist, I dedicate this to Sylvia Mathew Burwell, the Director of the White House Office of Management and Budget (my freshman college roommate).  And, of course, to everyone living in District 11.

Can you please help me out by adding your favorite books for kids set in  Appalachia? Thanks so much!

I got an assist after I tapped out at around 7 books from Carol Hurst’s excellent blog.

Affordable Health Care for All (Sylvia Mathews Burwell, is the 22nd United States Secretary of Health and Human Services)

When Your College Roommate Becomes President of American University

You don’t have to be a horse-y person to appreciate this gritty but uplifting chapter book. It hits on all the stress points of Appalachia: factories destroying the pristine natural environment, haves vs have-nots, and the equestrian legacy where this story unfolds.

14-year-old Sid has more natural riding ability than the rich girls who have $1000 custom boots, Equitarian horses that cost more than houses and the best trainers available. After her father, a horse trader,  dies in a car accident, she’s hoping that training and selling horses with her uncle will help put her family back together. When she takes a job at a fancy barn to earn money, she comes firsthand into the fancy world of the Equitation championships and if she can pull off a good showing at Madison Square Garden, she could achieve her ultimate dream, a show rider that can ride anything. [chapter book, ages 9 and up]

9. When I Was Young In the Mountains by Cynthia Rylant

The winner of a Caldecott Honor, Rylant’s picture book lovingly depicts the simple pleasures of living in Appalachia from splashing in a swimming hole to taking baths in the kitchen. There are subtle hints of the coal mining backstory; grandfather has to wash off the coal dust. [picture book, ages 5-8]

With beautiful illustrations and simple text, Ballet for Martha shows the coming together of American music, ballet and art in the collaboration by Martha Graham, Aaron Copland, and Isamu Noguchi to create this dance masterpiece. [nonfiction picture book, ages 6-10]

Here’s an eight-minute video of the ballet.

I have a post on three short stories about lesser-known Mary Breckenridge. She’s the Clara Barton or Florence Nightingale of  Appalachia. When her two children and husband died, she founded the Frontier Nursing Service to bring midwifery and health services to the poor of Appalachia. Clara Barton, Florence Nightingale … and Mary Breckenridge (ages 9-12) UPDATED [easy chapter book biography, ages 6 and up]

6. Missing May by Cynthia Rylant

Cynthia Rylant is on my list again, this time with a chapter book that I would describe as an Appalachian version of Because of Winn Dixie, which is, hands down, my favorite children’s book on the planet.

When Summer’s aunt-who-raised-her-as-a-mother dies, she and her uncle Ob are reeling from grief. Her quirky classmate Cletus Underwood comes around and pulls them into a quest to find a spirit medium to communicate with May. He is the one person who can connect with her uncle Ob and this trip proves to be life-changing for everyone. [chapter book, ages 9 and up]

5. That Book Woman by Heather Henson

The Pack Horse Librarians, known as “Book Women” brought library books to the Appalachian Mountains of Kentucky like clockwork, every two weeks, in any kind of weather. This beautifully illustrated picture book depicts the true story and captures the dialect of the area.  [picture book, ages 4-8 ]

4. How to Steal a Dog by Barbara O’Connor

Somehow the scheme to steal a dog and return it to claim the reward money seemed like the perfect solution to get Georgina (and her mom out ) of their financial predicament. They are living out of their car after her father left them.  Things don’t go according to plan — do they ever? — but along the way, the reader will feel like he or she has made a new friend in Georgina. [chapter book, ages 9 and up]

Set during Prohibition in Virginia’s Blue Ridge Mountains, young Tom Higgins, and his father run a microdistillery, crafting small batch fine whiskey (a.k.a. moonshine), and they consider it a time-honored profession. But when a preacher and his pretty daughter arrives and speaks out about the evils of alcohol, Tom is torn. [historical fiction chapter books, ages 8 to 12]

Perhaps the preacher’s daughter from Moonshiner’s Son was right (above); alcohol is evil and brings out the worst in men. Shiloh is an abused young beagle owned by a mean neighbor who drinks too much. When young Marty Preston finds Shiloh, he is moved to help the dog, but can he save it when it does not belong to him? [Newbery winning chapter book series, ages 9 and up]

Is Chasing Redbird set in Appalachia?  My kids love this book and insisted that it is located here and that it must be included.

It started out as an ordinary summer. But the minute thirteen-year-old Zinny discovered the old, overgrown trail that ran through the woods behind her family’s house, she realized that things were about to change.

Right from the start, Zinny knew that uncovering the trail would be more than just a summer project. It was her chance to finally make people notice her and to have a place she could call her very own. But more than that, Zinny knew that the trail somehow held the key to all kinds of questions. And that the only way to understand her family, her Aunt Jessie’s death, and herself was to find out where it went. [chapter book, ages 8 and up]

Emma Gatewood was sixty-seven years old when she became the first woman to hike the 2,160 mile Appalachian Trail by herself. It would be the first of three times that she would do this. Proving that resilience, curiosity, and grit can overcome anything, her story is remarkable for any person, let along someone of retirement age. The detailed illustrated maps help to underscore her achievement by showing her milestones. [picture book biography, ages 6 and up]

Eight-years-old Jeremiah J. Barnes (a twin) wrote this book about his family vacation. His mother say, “Last school year, both of my sons’ teachers stated they were struggling with writing. Being an educator, I started working with them at home, and I gave them writing prompts. One of those prompts was to write about our spring break from last year. My son’s response morphed into [this] published book.” [picture book, ages 6 and up] 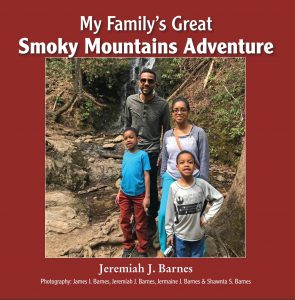 The Star Fisher: Can the American Dream Come True?

It’s 1927 and Joan Lee and her family are relocating from San Francisco to a small town in West Virginia with a dream of opening a larger laundry business. They immediately face racism, both from the townspeople and the children at school. Their landlord, Miss Lucy Bradshaw, a retired school teacher is the only person to show them kindness. The Lee family finds the difficult balance of respecting their culture while being open to a new one through a very symbol of Americanism, apple pie. After her mother donates an apple pie to the church fundraiser, Joan finally feels like this new place might be home. [chapter book, ages 8 and up]

For another book on Chinese Americans in the south, try Making Friends with Billy Wong by Augusta Scattergood.

Jimmy Jo Johnson’s family are country singers. As the story begins Jimmy Jo has been left behind with his grandmother in the mountains, being considered too young for the group. His grandmother was once part of the group but is now considered too old for the road. It is she who encourages Jimmy Jo to sing and, when he finally gets his chance, he outshines his father and mother and becomes the focal point of the group and the cause for their rise to “big time.” 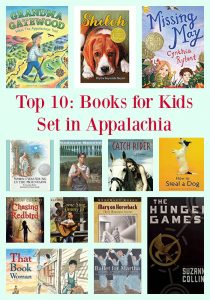 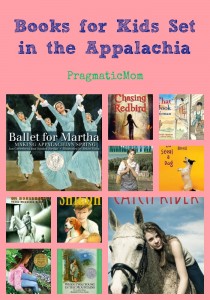 22 thoughts on “Top 10: Books for Kids Set in Appalachia”