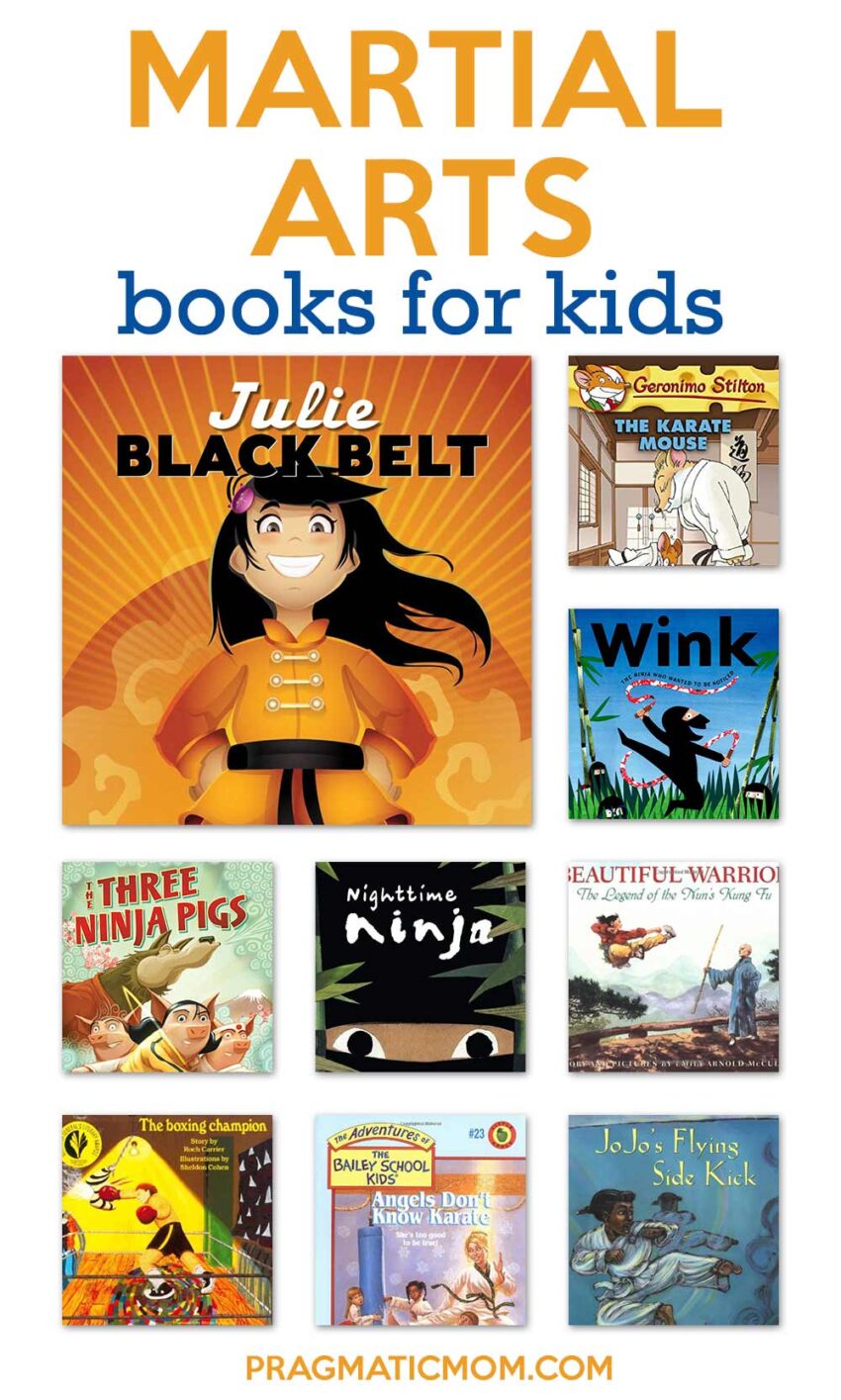 When PickyKidPix did martial arts with her siblings a few years, Chun Kuk Do, it did not come naturally to her. That’s weird because she’s very athletic. Now, after doing kickboxing and boxing with her, I realize it was the martial art style that didn’t quite suit her. She’s not good at memorizing sequences of physical movements for “forms.”

I haven’t tried that many different styles of martial arts, so I am by no means an expert but I thought it would be fun to match up different martial arts with who it might be best suited for. In a perfect world, you would have all these different karate studios within a reasonable commute. (I laugh as I type this since Boston is not a hotbed of martial arts compared to Los Angeles where I had lived previously.) Ah well, let’s go with my fantasy.

Personally, I think martial arts is great for both kids and adults for fitness, self-confidence, and self-defense. Just like finding the right genre or book to get kids reading, I think there is a martial art out there for everyone and you just need to find the right one. Like Cinderella and her glass slipper. I hope this helps!

Martial Arts for Kids: Books and Matching Up

I studied a little Gōjū-ryū, a  traditional Okinawan style of karate, that came from Chinese White Crane Kung Fu. Karate will be a new Olympic sport at the Tokyo Olympics in 2021.

This is the perfect introduction to what karate class will be like for kids who might be thinking of learning a martial art. Holly Sterling is a karate Great Britain Grand Champion who also teaches children at her dojo. [picture book, ages 4 and up]

I wanted to start with the Chinese martial art Kung Fu since most kids are familiar with Kung Fu Panda movies. You might have heard of Shaolin Kung Fu or the Shaolin Kung Fu monastery where it comes from. I’ve never done Kung Fu personally so I had to watch a lot of videos to get the gist of it.

Beautiful Warrior: The Legend of the Nun’s Kung Fu by Emily Arnold McCully

To me, Kung Fu is the perfect martial art for PickyKidPix; it has gymnastic elements and flexibility is a plus. It also uses a wide variety of weapons as part of the training which my kids think is fun!

For a Kung Fu demonstration, there’s no better master than Bruce Lee!

My kids studied Chu Kuk Do. It’s a Korean-based, American hybrid martial art style founded in 1990 by Chuck Norris who combines various martial arts including kickboxing, Aikido and Jujitsu. There is just one weapon, the bo staff. This style requires memorizing forms, or basic movement patterns, in order to advance up a belt ladder.

I have a picture book selection for karate belts by Oliver Chin.

I think it’s a good basic karate style that works for all kids as long as they are good at memorizing movement sequences (PickyKidPix was not). Dancers would be good at this martial art style. And not coincidentally, PickyKidPix also had trouble with dance sequences when she took Hip Hop. She’s more of an instinctive athlete.

Here are two of my son’s Chun Kuk Do teachers demonstrating:

Amateur boxing is an Olympic and Commonwealth sport and is a common fixture in most of the major international games—it also has its own World Championships.

Boxing is especially perfect for kids who have trouble memorizing forms. While there are punching sequences for training, it’s less burdensome to memorize specific movements. I’ve also heard that boxing is great for kids with ADHD because the sport requires rapid processing of stimuli and quick reactions.

Here are three of Grasshopper and Sensei’s 7th grade classmates at a boxing class.

Tae Kwon Do is a martial art originating in Korea. It combines combat and self-defense techniques with sport and exercise. It has been an Olympic event since 2000.

I took a few Tae Kwon Do classes in college and it was not for me. It’s very kicking intensive and it’s great for people who have very flexible legs. I do not. Other criticism from martial art-y friends is that it’s not a great martial art for a close fight, say in a bar, since it is more about kicking and therefore requires more space. For kids, this is a martial art that also requires forms memorization.

I think it would be great for anyone who wants a martial art that will also expose them to Korean culture.

Let’s Go To TaeKwonDo: A Story About Persistence, Bravery, and Breaking Boards by Aram Kim

For kids who can read independently, this easy reader is another take on being brave enough to break a board for the Tae Kwon Do Test. It’s part of a new series by Capstone featuring kids’ sports stories with girl protagonists! [easy reader, ages 6 and up]

My godkids studied with Olympic medalist Jimmy Kim. He was the first American to win the gold in this event.

When I lived in Los Angeles, I studied Aikido down the street at a very traditional dojo. I happened to live near Sawtelle Blvd. which is like a mini Japantown. In a weird coincidence, my Sensei also lived in the same ratty apartment building as I did. He was from Spain where he told us Aikido is really popular. I used to see him in the laundry room and I always felt a little safer knowing he was in my building!

Aikido is a Japanese martial art developed by Morihei Ueshiba as a synthesis of his martial studies, philosophy, and religious beliefs.

To me, Aikido is the most elegant of all martial art forms. It uses the other person’s energy and motion against them so it’s great if you are small. I think of Aikido as the bullfighting of martial arts … there is the same sleight of hand, gracefulness and precise technique. But it is for the cerebral and the patient. It takes a lot of training for Aikido to be effective for self-defense.

You don’t need to memorize forms for Aikido but you practice in a dojo by pairing up. It’s always a pair to practice each technique since it’s about redirecting your opponent’s energy.

My brother-in-law in an expert at Krav Maga and my sister studied it as well. It’s a tactical martial system developed in Israel that consists of a wide combination of techniques sourced from boxing, Muay Thai, Wing Chun, Judo, jiu-jitsu, wrestling, and grappling, along with realistic fight training. It’s very effective for righting and self-defense.

I have personally studied kickboxing the most and I really love it. It’s very immediate; there are no forms to memorize or very difficult techniques to learn. I like that it uses both boxing and kicking which makes it a full-body workout and also great for self-defense, especially if you are small, like me.

Kickboxing  is a group of martial arts and stand-up combat sports based on kicking and punching, historically developed from Karate, Muay Thai and Western boxing. Kickboxing is practiced for self-defense, general fitness, or as a contact sport.

Muay Thai is kickboxing on steroids. Instead of using your foot to kick, you use your shin which is much harder and also forces you to be closer to your opponent.  You actually need to toughen up your shins giving it lovely hues of black, blue and purple from the bruising required. It’s a lot of knees and elbows too, making it very effective for self-defense (where the best self-defense is a good offense!).

It’s tough to find Muay Thai kickboxing where I live so I was fortunate to train with a Brazilian champion.

Here’s Anderson Silva; he’s the bald guy and also considered to be the best pound for pound mixed martial arts fighter in the world.

I’ve never studied Judo but my sister-in-law was very good at it. There seems to be a lot of tumbling involved. It would be good for gymnasts who like to wrestle. There is much more of a grappling element to it.

Judo is a modern martial art, combat and Olympic sport created in Japan in 1882 by Jigoro Kano. Its most prominent feature is its competitive element, where the objective is to either throw or takedown an opponent to the ground, immobilize or otherwise subdue an opponent with a pin, or force an opponent to submit with a joint lock or a choke. Strikes and thrusts by hands and feet as well as weapons defenses are a part of judo, but only in pre-arranged forms and are not allowed in judo competition or free practice.

Thank you to Susan for her comment on the Korean martial art Tang Soo Do (which is new to me).

Tang Soo Do is a Korean martial art incorporating fighting principles from subak (as described in the Kwon Bup Chong Do), as well as northern Chinese kung fu.  The techniques of what is commonly known as Tang Soo Do are primarily shotokan karate, subak, taekkyon, and kung fu.

There are many, many more styles of martial arts but I hope that you got a sense of these are different from each other.  Which one appeals to you? 60 thoughts on “10 Martial Arts To Consider for Your Kids”