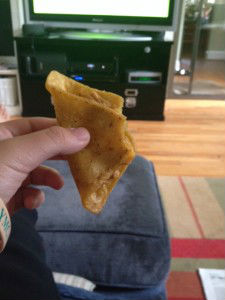 This is a sponsored post and my teen actualy did make José Olé Nacho Bites on her own!

It was a hectic Columbus Day Weekend. My two younger kids played in soccer tournaments and my oldest, now 13-years-old, only had one early soccer game. She opted to miss her siblings’ seven games. I can’t say that I blame her. The Sunday games required a 6:30 am wake up time.

So we left her. In bed. She’s in 8th grade after all, so she was fine. And she slept until 11:50 am. But we didn’t leave her with any kind of meal, either for breakfast or lunch. We barely ate ourselves and had to rush out the door, barely coherent. (I am not a morning person!)

After School Snacks for Teenagers to Make

Her week of cooking camp came in handy, though. While we were gone, she found the José Olé  Nacho Bites in the freezer and made them herself for breakfast — I guess you could call it brunch —  eating them with plain since we had no salsa or guacamole in the house. I’d add those myself if I were eating the Nacho Bites for a snack! Then, she kicked back in the front of the TV, Nacho Bites in hand. And that’s where we found her when we returned a few hours later, the dog at her feet, trying to get crumbs.

I’m not surprised that the first thing she reached for was Nacho Bites. Everyone likes Mexican food in my family but it’s hard to find in the Boston area. I like the idea that my teen can feed herself. She feels independent and I don’t have to worry about her going hungry. José Olé Nacho Bites would be great as an after school snack especially as winter approaches since hot snacks are particularly appreciated by my kids after a long day at school. It’s nice to know that my teen can make these for herself and her friends when then come over, ravenous since their lunch time is 11:30 am.  They are filling enough, too, to keep her going when she has a late soccer practice.

I’m storing a few boxes of these in my freezer. Would you like to try José Olé Nacho Bites too? They are offering my readers a $1 off coupon if you go to their website. I hope you enjoy them and they help your teen feel independent too! 4 thoughts on “After School Snacks for Teenagers to Make”