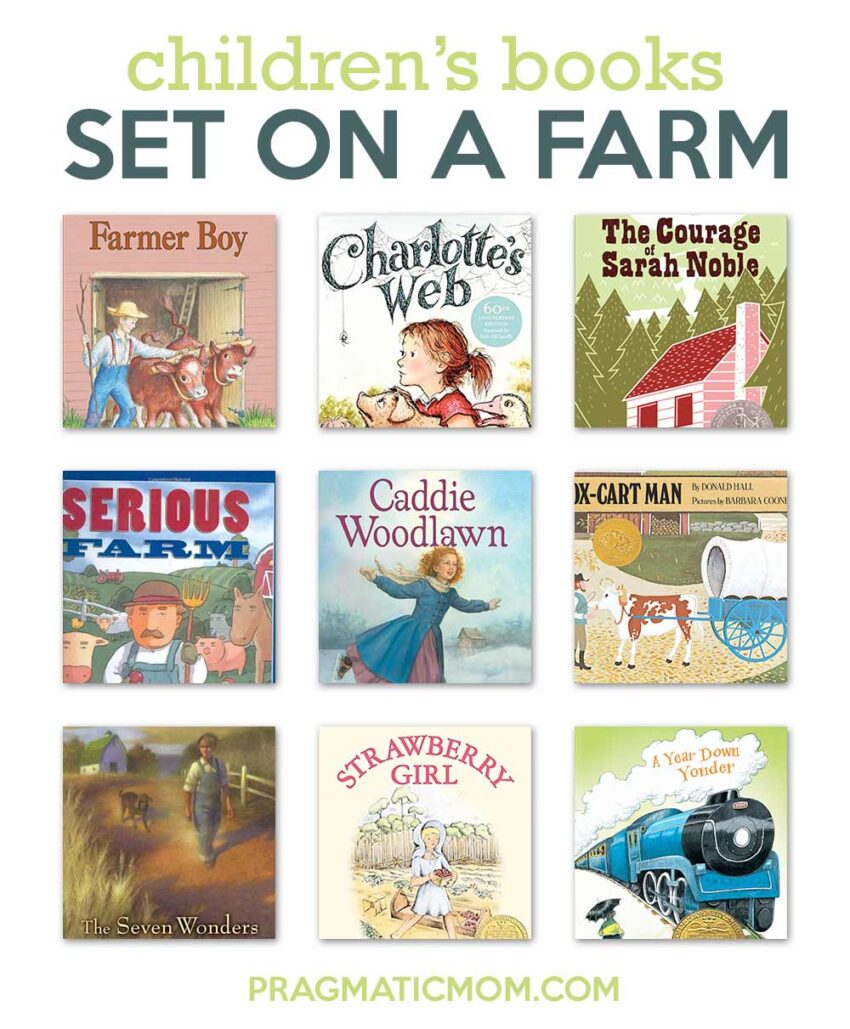 We are lucky to have farms in our suburban town as well as nearby but these local farms have morphed into U Pick or teaching centers. I guess I’ve always fantasized about living on a farm. Self-sufficiency and all that. I only know one person who grew up on a farm. His friends say that he’s the go-to for any kind of fix-it jobs. If you live on a farm, you learn to do everything and anything!

My own garden plot in my tiny backyard is too shady and small to grow anything except hardy herbs like mint and oregano. I have to farm vicariously these days though books so I’ve rounded up my favorite old fashioned children’s books set on a farm. I hope you enjoy this trip down memory lane!

What are your favorite picture books and chapter books set on an old-fashioned back in time farm? Thanks so much for sharing!

10. The Evolution of Calpurnia Tate by Jacqueline Kelly

Set in 1899 in Fentress, Texas near Austin, 11-year-old Calpurnia Tate lives on a bustling farming enterprise set up by her forward-thinking and scientific-minded grandfather along with her 6 brothers and parents. While this Newbery Honor chapter book focuses on Calpurnia’s evolution into a scientist — one hopes that she will be the first female to attend the University in Austin — I also loved the vivid descriptions of growing up on a Southern gentleman’s farm. Her grandfather owns the cotton gin-mill as well as vast acres of pecans and cotton and the relationships between servants, locals, and her family is also colorfully depicted in this strict social ladder of etiquette and status. [middle grade, ages 9 and up]

9. A Year Down Yonder by Richard Peck

Set during the Great Depression in a rural town a long way from Chicago (the first book), Mary Alice returns to live with her outsized Grandma Dowell. Her grandmother is legendary; no one dares to mess with her but her heart is as big as the moon. There aren’t many elderly characters in children’s books as feisty, independent, or as wonderfully dominant as Grandma Dowell. She is a big personality and she makes this chapter book a hilarious read. [middle grade, ages 9 and up]

Who knew farming could be as dramatic as the Hatfield and McCoy feud? Set right after the turn of the century in the early 20th century, strawberry farming in Florida brings out the bad blood for the Boyers and the Slaters when Slater’s cattle destroy the Boyers’ crop. Lenski was inspired by Crackers, the descendants of Anglo-Saxon pioneer settlers in early Florida, that she met and befriended in this snapshot of a bygone time. [middle grade, ages 9 and up]

I have to say nothing has made so excited than to learn kids in my area have loved this book too. Sometimes the old-fashioned books slip by their radar or have trouble competing with the likes of Percy Jackson or Diary of a Wimpy Kid!

Sassafras Springs is a small, sleeping farming town and Eben McAllister thinks there is nothing exciting here at all. His pa challenges him to find seven wonders in his town that rival the Seven Wonders of the World and his prize will be a trip to Colorado. As Eben searches out this seemingly impossible task, he finds that the people around him have stories to tell … stories that will rival the Seven Wonders of the World!

This is such a wonderful story about discovering the wonder of where you live! [middle grade, ages 9 and up]

6. The Ox-Cart Man by Donald Hall, illustrated by Barbara Cooney

The winner of the 1980 Caldecott, The Ox-Cart Man is a quiet but powerful portrayal of life in Colonial America set in 19-century rural New England. [picture book, ages 5 and up]

I always love stories based on the author’s grandmother, and Caddie Woodlawn was one of those books that I read and re-read as a child. It won the 1936 Newbery. 11-year-old Caddie is a tomboy living in 1860’s Wisconsin during the Civil War. After nearly dying of an illness, she is allowed to run freely like her brothers when she recovers. The most searing images I have of this book is Caddie’s friendship with the local Native American tribe and the dangers that face both of them. [middle grade, ages 9 and up]

Farmer Fred has no sense of humor. In fact, the animals on Farmer Fred’s farm have never seen him smile. Ever! The animals wage a campaign for a little levity and hilarious hijinks ensue. [picture book, ages 4 and up]

3. The Courage of Sarah Noble by Alice Dalgliesh

This early chapter book reminds me of Caddie Woodlawn. It too won Newbery accolades but it makes life in the 1880s seem downright luxurious! 8-year-old Sarah Noble and her father leave their mother and siblings behind n 1707 to travel through the wilderness to build a new home for their family in New Milford, Connecticut. She has to rely on her failing courage, especially when she is left alone when her father returns to bring their family back. This is based on a true story. [early chapter book, ages 6 and up]

2. Charlotte’s Web by E. B. White, illustrated by Garth Williams

Farmer’s children are taught to emotionally distance themselves from the animals they care for and raise — animals that one day will be slaughtered either for their family meal or for others. It’s not easy for Charlotte though after she falls in love with her piglet runt Wilbur. It will take a miracle in the form of Charlotte A. Cavatica, a beautiful large grey spider who lived with Wilbur, to save him. [middle grade, ages 9 and up]

Laura Ingalls Wilder tells the story of her husband’s boyhood, Alonzo Wilder, in Farm Boy who grew up in the 1860s near the town of Malone in upstate New York. While the Wilder boys have endless chores, his life seems downright cushy compared to Little House on the Prarie’s Laura Ingalls. [middle grade, ages 9 and up]

Farmer Brown doesn’t take the demands of his animals seriously but he really should! They communicate their requests through typed notes. Duck is a neutral party that helps to straighten this all out! My kids think this book is so funny! [picture book, ages 3 and up]

Duck from Click, Clack, Moo is back and he is using his diplomacy skills to run for office after discovering his disenchantment with farm life. Little does he know that the life of a politico is not what it’s cracked up to be. One of our favorite picture books with the indomitable Duck! [picture book, ages 3 and up]