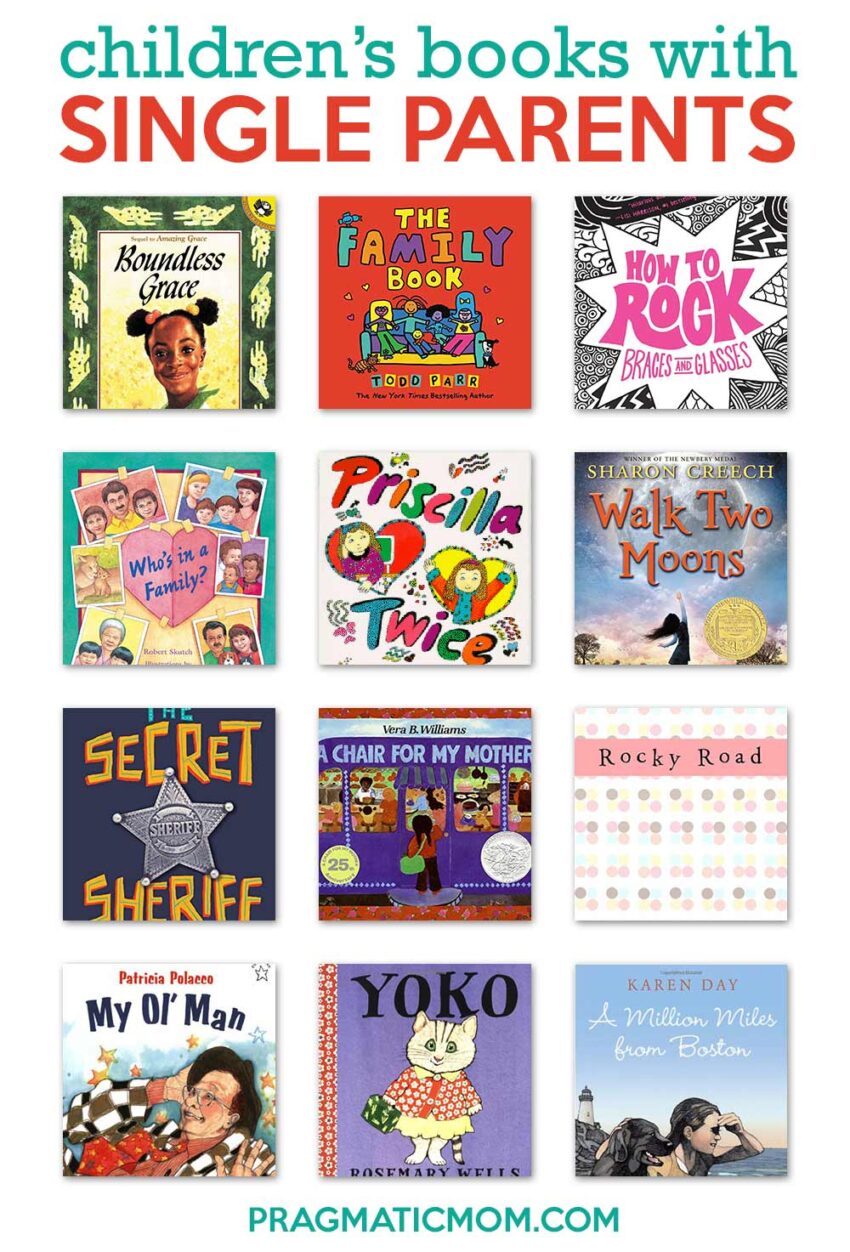 The divorce rate in America peaked at around 50 percent in the 1980s and slowly has been trending downward. It is now slightly more than 40 percent. With so many divorced families, why are there more children’s books depicting single parents?

Fruit & Veggie Mom ‏(@Eatfruitnveggie3h) asked me on Twitter, “My question is – what about books for single moms? Everything is mommy and daddy!”

This list is for her! Can you please help me out by adding your favorite children’s books with single parents? Thanks so much!

The Secret Sheriff of Sixth Grade by Jordan Sonnenblick

What makes a true hero? Sonnenblick has always created heroes that spoke to me. They weren’t obviously heroic on the outside being puny or skinny but they carried an invisible burden gracefully that would have felled anyone else. They also have the superpower to change those around them for the better.

Maverick is carrying the weight of his mother’s alcoholism and the instability and poverty that it brings including food instability. His father died in Afghanistan when he was three. His mother has always attracted men who were physically abusive and Maverick’s shame is that he never stood up to them.

As the story unfolds, Maverick decides to be that guy who protects the victims at school despite being scrawny. He finds out that people surprise you, especially himself. If you liked Wonder by R. J. Palacio or One for the Murphys by Lynda Mullaly Hunt, you will love this book too. [chapter book, for ages 8 and up]

10. A Chair for My Mother by Vera Williams

I love this picture book about an African American multigenerational family who saves up and then searches for a special chair after a fire destroys their home. Though it is never explicitly stated, the family is depicted as a grandmother, a mother, and her daughter. [picture book, ages 4 and up]

Tess Dobson is moving to Schenectady, New York, another one of her hair-brained ideas by her bipolar single mother. Her younger brother is hearing impaired so that leaves just her to keep the family together.

When her mother’s dream of owning an ice cream parlor goes south, can she pull together her new friends, both young and old — they are living in a retirement village — to save the business? [middle grade, ages 9 and up]

8. My Ol’ Man by Patricia Polacco

Polacco writes and illustrated advance picture books that draw upon her past. In this picture book about her divorced dad, she and her brother spend time with him and their wheelchair-bound grandmother when disaster strikes. He loses his traveling salesman job. Can a mysterious rock help find him a new job? [picture book, ages 6 and up]

Yoko’s family is quite small. It’s just she and her mother. She has grandparents back in Japan who love her but that’s a different story (Yoko’s Paper Cranes). When Yoko brings sushi for her school lunch, she is embarrassed by her “weird lunch.”  Her teacher devises an international food day to teach kids tolerance.

Will it work?  This is a wonderful multicultural picture book that covers themes of bullying and friendship. [picture book, ages 4 and up]

6. A Million Miles from Boston by Karen Day

Lucy can’t wait to go to her family’s summer house in Maine but this summer things are complicated. Ian, an annoying boy from school, is staying next door. And her father, widowed when she was six-years-old, now has a serious girlfriend who is coming to visit. Why can’t things stay the same? [middle grade, ages 9 and up]

Thirteen-year-old Salamanca Tree Hiddle’s mother has disappeared which puts her on a journey of discovery. First, she and her father leave their farm in Kentucky and move to Ohio. Next, Salamanca travels with her grandparents on a six-day drive to Idaho to retrace her mother’s route.

Her new best friend Phoebe’s mother has also left their family. As Salamanca walks two moons in the shoes of her mother, she is finally ready to face what really happened to both missing mothers. [middle grade, ages 9 and up]

The story of Amazing Grace continues. In Boundless Grace, she goes to Africa to visit her father who has remarried and has a new family.

Grace’s family in the United States is a multigenerational one consisting of her grandmother, mother, and herself and she worries that her family isn’t complete without a father, brother, and dog. [picture book, ages 4 and up]

3. The Family Book by Todd Parr

Todd Parr is gently and humorously reassuring that families come in all shapes and sizes. [picture book, ages 1 and up]

2. How to Rock Braces and Glasses by Meg Haston

It’s not easy when your father leaves your mother. Perhaps this is why middle school Queen Bee Kacey Simon finds is a mean girl but when she is forced to wear glasses after a contact lens incident and braces to straighten her teeth, she finds she is now in a lower social echelon. Her “friends” have abandoned her.

Luckily, she has a plan to turn it all around but will it be worth it? [chapter book, ages 10 and up]

2. Who’s in a Family? by Robert Skutch

Family is important, but who’s in a family? Why the people who love you the most! This equal opportunity, open minded picture book has no preconceptions about what makes a family a family. [picture book, ages 3 and up]

1. Love Is a Family by Roma Downey

This is the story of a young girl being raised by her mother. She longs for a large noisy family like that of her friend. At the school family fun night, she sees all the different family combinations and realizes it is love that makes a family. [picture book, ages 4 and up]

Thank you to Catherine of Story Snug for this wonderful gem of a picture book!

The Storm Whale by Benji Davies

She says, “One of my daughter’s first questions about the story was where Noi’s mummy was which gave us the opportunity to talk about different family structures. The Storm Whale has also provided us with opportunities to talk about friendship, caring, and whales.

My daughter has fun counting the cats on each page and has started to include whales in her own stories.” [picture book, ages 4 and up]

The Penderwicks on Gardam Street by Jeanne Birdsall

Mr. Penderwick is widowed and his four girls get involved in his personal business with a “Save Daddy” Plan to foil his plans for jumping back into the dating world. Spoiler alert: he does find true love by the end of the book. [middle grade, ages 8 and up]

Half Magic by Edgar Eager

Four children of a single mother find a magic coin that grants half of their wishes. Their mother’s new “friend,” Mr. Smith, fortunately, understands about magic because he’s needed for a magic adventure that goes awry. Spoiler alert: Their mother marries Mr. Smith by the end of the book. [middle grade, ages 8 and up]

The Saturdays by Elizabeth Enright

The four Melendy children live with their father and Cuffy, their beloved housekeeper, in a worn but comfortable brownstone in New York City. There’s thirteen-year-old Mona, who has decided to become an actress; twelve-year-old mischievous Rush; ten-and-a-half-year-old Randy, who loves to dance and paint; and thoughtful Oliver, who is just six. [middle grade, ages 8 and up] These book lists are for those difficult situations that come up when you want to talk to kids about something but don’t know where to start:

Are you looking for something different? I indexed and cross referenced my 300+ book lists: List of Lists: All My Book Lists.

11 Chapter Books About Grief and Loss

Birds and the Bees Talk Books for Kids

Living in an Alcoholic Home Books for Kids

Best Books for Kids that Deal with Bullies

Top 10: Coping with Loss of Pets Books for Kids

Books About Cancer for Kids and Teens