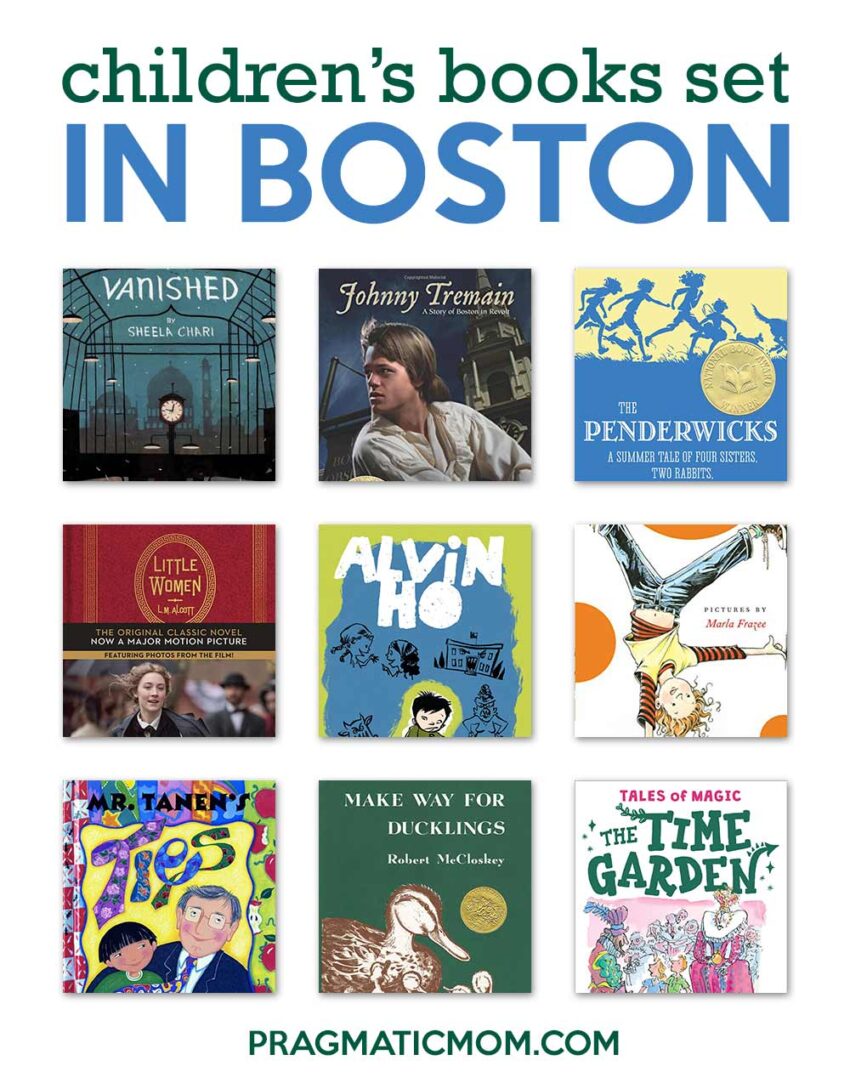 If you have ever been to Boston (and everyone should go there at least once), you will  know that as a city it is a bewildering mixture of modern improvements and the relics of antiquity, and it is interesting, for example, to come out from buying plastic clothespins and chocolate-strawberry-marshmallow-banana splits in a department store glittering with neon, and find yourself face to face with the Old South Church. And the streets have wonderful old names like Milk and Pump. The Time Garden by Edward Eager (from the Half Magic series)

The wonderful thing about living in a historical city is sharing it with friends. I thought I’d round-up ten of our favorite picture books, early chapter books and chapter books for kids set in Boston and environs. And we hope you will come visit one day as well!

What are your favorite books for kids set in Boston? Please share and I’ll add to the list! Thank you!

10. Vanished by Sheela Chari is set in Arlington and Harvard Square in Cambridge, Massachusetts (and also India)

Chari’s contemporary chapter book is both multicultural and award-winning. I love that it’s set in an area that we frequent for soccer games and shopping: Arlington and Harvard Square in Cambridge (they are adjacent cities). When 11-year-old Neela’s veena goes missing, she suspects there is more afoot than just a musical instrument. Could the rumors of a curse be true? [middle grade, ages 8 and up]

One of my favorite Newbery winning chapter books growing up seems to be less popular with my children’s generation. That’s a shame because it made Boston during the cusp of the American Revolution come alive for me through the eyes of 14-year-old Johnny, a silversmith’s apprentice who’s molten silver accident leaves him seeking new employment and the world of pre-revolutionary Boston politics at a newspaper. [middle grade, ages 9 and up]

8. Bus Route to Boston by Maryanne Cocca Leffler is set in a suburb north of Boston.

We don’t get to the North End nearly often enough, but when we do go, a stop at Mike’s Pastries is a must! In Bus Route to Boston, author Cocca Leffler brings us on her childhood bus trips from Everett, a suburb of Boston, to the North End as she shops with her mother and sisters. The final stop is at an Italian bakery for cannolis to share with Bill the bus driver! [picture book, ages 4 and up]

7. The Penderwicks: A Summer Tale of Four Sisters, Two Rabbits, and a Very Interesting Boy by Jeanne Birdsall is set in a made-up town in Amherst and visit the Berkshires in the first book

I suspect that the Penderwicks visit in the Berkshires when they rent a summer house on the Massachusetts estate of Arundel but that they live in the Amherst area. Both areas are made up of towns but the descriptions seem to fit both areas. [middle grade, ages 8 and up]

6. Little Women by Louisa May Alcott set in Concord, Massachusetts

Orchard House which is where Louisa May Alcott wrote her books is also the setting of Little Women in Concord, Massachusetts. It is now a museum and is referenced in #1 pick on this list, The Time Garden by Edward Eager. [middle grade, ages 12 and up; Stepping Stone version for ages 8 and up]

I love this early chapter book series which reminds me of Diary of a Wimpy Kid. Alvin is an Asian American 2nd grader who is allergic and afraid of just about everything which leads to plenty of hilarious adventures. [early chapter book, ages 6 and up]

The battle of Lexington and Concord is mentioned in one of the books since it’s reenacted each year on Patriot’s Day:

4. Clementine series by Sara Pennypacker is set in Boston

PickyKidPix adores the Clementine series and because she lives near Boston as well, it reflects her school life as well. Both she and Clementine take a school trip to Plimoth Plantation, for example. Even though these books are now too easy for her, she still insists on buying each new book as it comes out. That’s high praise from her! [easy chapter book, ages 6 and up]

Lynnhurst Elementary School is Saugus really does exist as does Mr. Tannen and his wonderful ties that signal his mood, his agenda, and his love for the kids he oversees as Principal. Too bad Mr. Apple, the superintendent of his school district, finds his ties unprofessional! [picture book, ages 4 and up]

2. Make Way for Ducklings by Robert McCloskey is set in Beacon Hill, Boston

If ever a picture book defined a city, it would be Make Way for Ducklings for Boston! This classic Caldecott picture book describes a real incident in Beacon Hill many, many years ago, reimagined from the ducks’ point of view by master storyteller Robert McCloskey. All the Duck Boat tour operators, for example, have all eight duckling names memorized! [picture book, ages 4 and up]

1. The Time Garden by Edward Eager is set in the South Shore, Boston, and Concord

My son and I are working our way through the Half Magic chapter book series and this was our fourth book. I was delighted to find the four cousins, Eliza, Jack Roger, and Ann, together again in the South Shore visiting Great Aunt Old Mrs. Whiton. When they meet a magical Natterjack toad, they realize that the thyme garden can transport them back in time and they end up in the midst of the American Revolution, kidnapped along with Meg and Jo from Little Women, saving runaway slaves on the Underground Railroad and meeting various queens of England. [middle grade, ages 8 and up]

“Nellie Sanders lives in a Boston neighborhood with her father, older brothers George and Tom, and younger brother Teddy in 1974. Their mother has recently left home and has not been in contact with the family. Because their father works long hours as a cook at the Far Reach restaurant, Nellie is in charge of watching Teddy during the day, earning ten dollars “to make sure that Teddy at something besides Popsicles, didn’t stay in his p.j.’s all day or get run over by a bus” (from the E ARC but SO descriptive!). The two read the newspaper every day, lingering over the horoscopes and Hagar the Horrible comic strips but also following the Watergate coverage and the news of Mooch, a bird at a nearby zoo who has been stolen. They also take in a dog, whom they name Abe after they see him being beaten by a neighbor. Abe becomes a big help in dealing with their precarious situation. When their father finds out that the $500 that he had saved up to take the family on a trip to Mt. Rushmore was taken by Nellie’s mother, he goes back into a deep depression, not getting out of bed, going to work, or getting groceries for the family. Nellie steps in to take care of the family, and after she finds out from George that he’s the one who took the money and sent it to their mother, she decides to try to earn back the money so her father feels better. She asks neighbors for odd jobs like weeding, washes cars, and has a garage sale to sell her mother’s clothes and jewelry. She’s able to keep the sale a secret from her dad even though all of the neighbors know. Tom and his friend help out a lot, earning money from carrying groceries at the store for people. When the father finds out George’s role in the theft, they fight, and George goes to live with a friend, putting even more of a burden on Nellie. Her friend, Maya, comes from a supportive family, but Maya is becoming more interested in clothes and boys, and Nellie has no patience for either. Nellie isn’t able to come up with the $500 she would like, and when her mother visits, an incident occurs that causes the family to need the money for other expenses. Will Nellie and her family be able to reconcile themselves with the mother’s absence and find a way forward?” [middle grade, ages 8 and up]

Graphic novels sometimes don’t have very involved plots, but there is plenty going on in Shark Summer. There’s friend drama with Alex, a travel guide with Elijah, a historical mystery, and a new friend. Add movie special effects, family financial circumstances, and the fact that this seems to all take place in the mid-1970s when movie cameras took the actual film, and it all adds up to an interesting graphic novel, not unlike Michael Beil’s Summer at Forsaken Lake, albeit on Martha’s Vineyard instead of Lake Erie. [graphic novel, ages 8 and up]