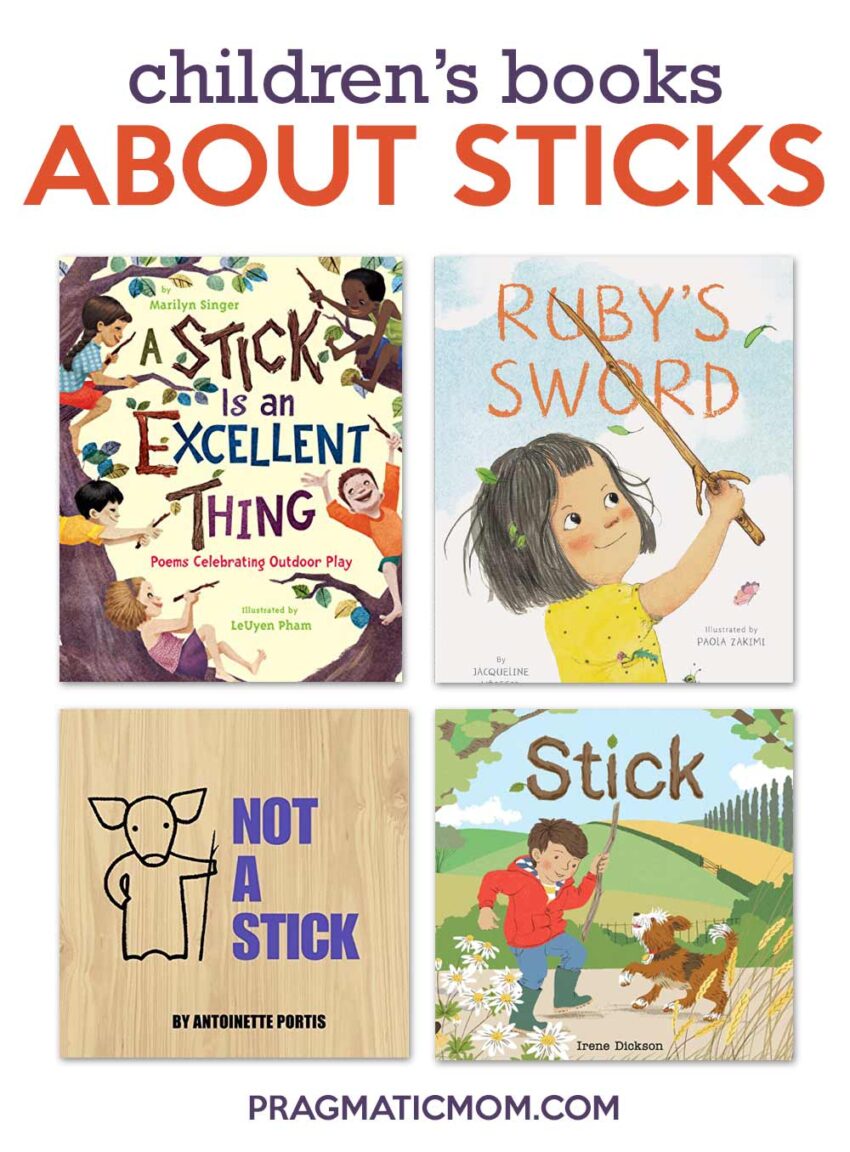 I lured my son out to the dog park which is a wooded path around a reservoir with the promise of finding sticks for making bows and arrows. Left to his own devices, he will stay in front of screens for hours upon hours.

We made several trips in search of sticks, which are excellent, we found, for bows, arrows, wind chime paths, ninja weapons, balance beams, and climbing (when attached to a tree). A stick is, indeed, an excellent thing!

Stick Toys Because A Stick is an Excellent Thing

A Stick is an Excellent Thing: Poems Celebrating Outdoor Play by Marilyn Singer

Poetry about outdoor play may entice kids to both play outside and read poetry. What a wonderful combination! [poetry picture book, ages 4 and up] Ruby demonstrates that a stick is an excellent thing. When she chases after her brothers, she finds sticks that make worthy dragon-fighting swords. It has other uses too! Apple harvester, art tool, and tent. With her inviting stick invention, her brothers finally include her. [picture book, ages 4 and up]

Not a Stick by Antoinette Portis

Explore more possibilities of what a stick can be: a baton for conducting an orchestra, a paintbrush to create a masterpiece, or a sword to slay a dragon. It’s not a stick; it can be anything! [picture book, ages 4 and up]

With the same concept as Not a Stick, a stick can be many things in this simply told picture book. Pair it with Not a Stick. [picture book, ages 2 and up]

Alphonse, There’s Mud on the Ceiling by Daisy Hirst

Natalie and Alphonse live in an apartment on the 7th floor. There are some games just not suited for apartment living. Their dad insists that they take their jungle games outside and they go on an expedition and collect sticks. It turns out that they can play their jungle games on the balcony thanks to the stick that they use to make a tent! [picture book, ages 4 and up]

A Stick is a Bow and Arrow

My son has been taking archery at his YMCA camp for a few summers. This summer, he was exultant because he was able to hit the target. Not the bullseye, mind you. Just the target.

He found the perfect curved stick at the entrance to the trail, and we had packed rubber bands and a paring knife. In no time at all, he made his bow despite the constant annoyance of the mosquitoes that were out, full force, mid-morning. You need to notch the arrows. my son tells me. Luckily, the bow sticks he found had natural grooves to place the rubber bands. He used three or four regular sized rubber bands looped into each other to make a long one. A bow turned sideways makes a cross-bow too. Posthaste after the dog run, we had to run to Staples in search of duct tape in order to make handles for his stick toys. My son also used aluminum foil to shape it. PickyKidPix, his older sister, was impressed. That’s saying a lot! A Stick is a Balance Beam

A stick is a challenge when it’s a log lying across a dry creek bed!

A Stick is a Tug of War Game

My dog will challenge dogs or boys to a game of tug of war. A stick is a wonderful thing for dogs too! A Stick is a Wind Chime Path

My son discovered a path of sticks that kids most likely gathered a few weeks ago when it was muddy. Now that the mud is gone, he noticed that it makes a wind chime noise from the jostling of the sticks.

A Stick is a Magic Wand A Stick is a Climbing Tree

To climb or dangle, that is the question. A stick is a wonderful thing even when it’s still attached to the tree! We hope you have fun with sticks too and enjoyed the poem, A Stick is an Excellent Thing. Watch the seasons change in this 15-month time-lapse made from 40,000 still images: A Forest Year by videographer Samuel Orr.

36 thoughts on “Stick Toys: A Stick is an Excellent Thing”