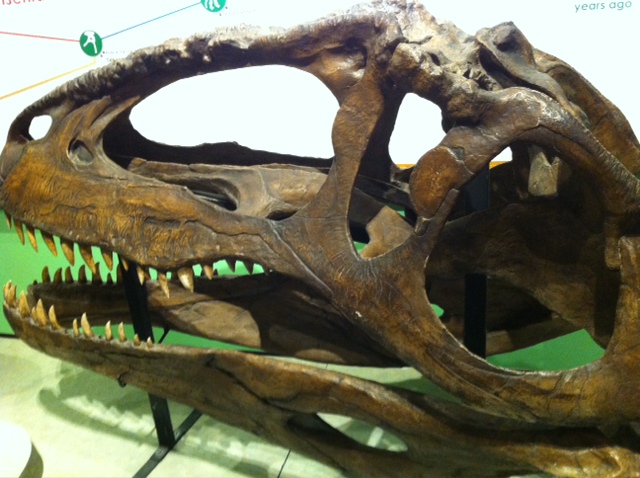 This fearsome Tyrannosaurus Rex (T. Rex) is the mascot of Boston’s Museum of Science. He (or she) can be seen as you enter the museum, and enticed my son down two stories to the dinosaur exhibit. I mean, who can resist a life-size T. Rex? I told my son that scientists have no idea what the skin color of the T. Rex actually was. There are no records of it so it’s their best guess. They most likely had some kind of coloring to blend in to help them hunt, but your guess is as good as mine as to pattern and color! When your child thinks dinosaurs, does it seem that the T. Rex is the only dinosaur that matters? Are all others a distant second? My son is that way.

But … recent discoveries have unearthed relatives even larger and more fierce than the T. Rex! Meet … the Giganotosaurus! (Even though my son has read about the Giganotosaurus, T. Rex is still his favorite. The T. Rex has the best PR machine in town, it seems!). The Tyrannosaurus Rex’s head shape is very different from its cousin, the Giganotosaurus. My son thought the T. Rex’s head resembled our dog’s, a Golden Retriever. Who do you think would win if the T. Rex faced off with the Giganotosaurus?

When my son was three-years-old, he was obsessed with dinosaurs. I read dinosaurs every night for one entire year. Eventually, I bought every dinosaur book I could get my hands on, I was so desperate for variety as the primary bedtime reader. I have a book list of our favorite dinosaur books — eventually, we switched to Pokémon. I missed those dinosaur books then!

Need to know more about the dinosaur that might be able to take down the T. Rex? Then, this is the book for you! [picture book, ages 8 and up]

Pallotta’s alphabet books do a wonderful job entertaining both child and adult. The alphabet A to Z is a helpful organization for the interesting facts that Pallotta packs in. His books read like very entertaining non-fiction in the guise of an alphabet book! [picture book, ages 3 and up]

We love Sabuda’s amazing popup Prehistorica pop up books! My husband found the first one at a museum gift shop and collected the lot of them. He cleverly packs an encyclopedia’s worth of information in foldouts and pop-ups. There is so much information that reading this book feels like a new experience each time. [pop up book, ages 5 and up]

In 1991, Dr. Kirkland was part of a team hunting for dinosaur fossils in Utah. While they were digging up one skeleton, a worker found a giant claw. “It was the largest I had ever seen, “Dr. Kirkland told SN. The claw belonged to a new kind of dinosaur. They named it Utahraptor (YEW-tah-RAP-ter). From Scholastic.

12 thoughts on “Dinosaur T Rex: Not the Fiercest!”