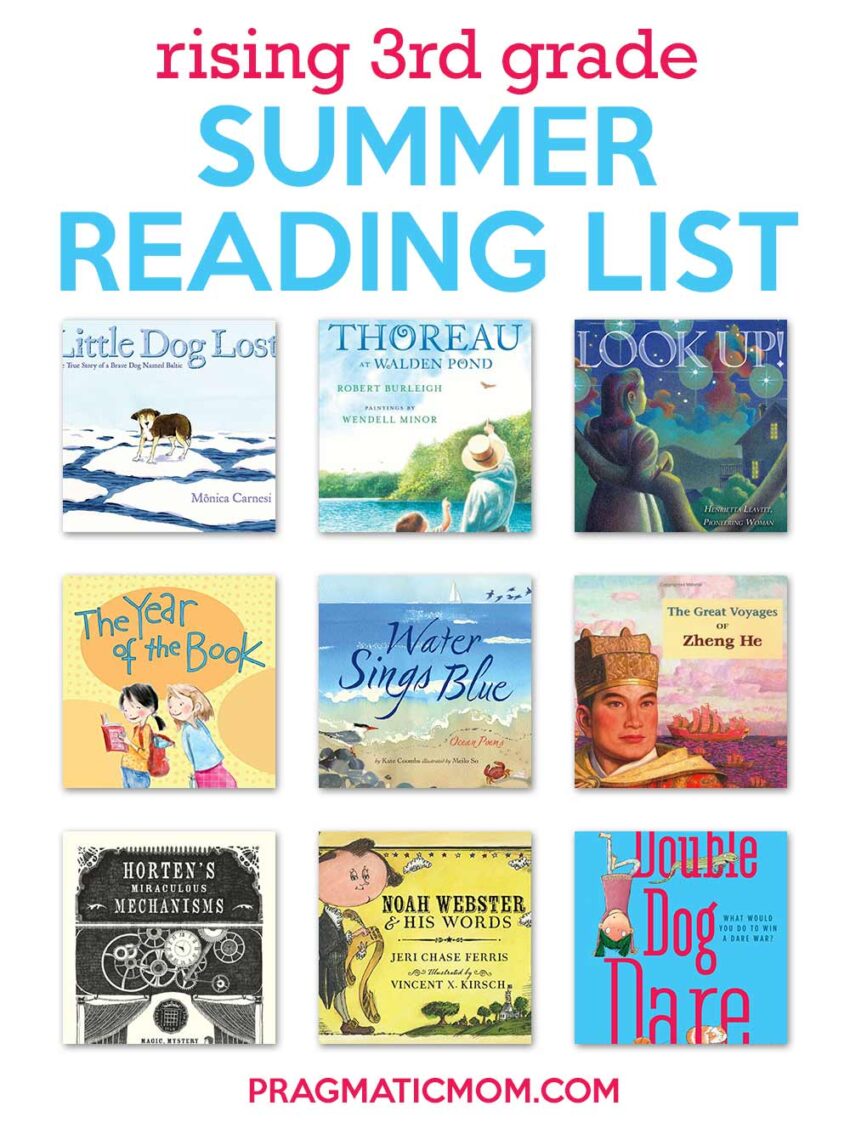 This great summer reading list for Going Into 4th Grade is from my library. It’s a collaboration between the Newton Public School Library Teachers & the Newton Free Children’s Librarians. PickyKidPix also has a great list of chapter books she read at this same age, when she was assigned five books to read during the summer before going into 4th grade.

A boy, a dog, and an old man are lonely before the boy plans a rally, the dog looks for a boy, and all the townspeople run to the old man’s aid when lightning strikes his home and something miraculous happens.

In 1845 in Concord, Massachusetts, Henry David Thoreau began a radical experiment: he built a cabin in the woods and lived there, alone, examining the world around him. This book imagines a special day spent with the celebrated writer and naturalist through the eyes of a child.

Henrietta Levitt was the first person to discover the scientific importance of a star’s brightness, so why has no one heard of her? Learn all about a female pioneer of astronomy in this picture book biography.

Follows a young Chinese American girl, as she navigates relationships with family, friends, and her fourth grade classroom, and finds a true best friend.

Twenty-three poems illustrated in watercolors include “songs” in praise of the ocean and the life within.

The Great Voyages of Zheng He by Demi

The life story of Zheng He, the great Ming Dynasty Chinese naval commander who led the world’s biggest fleet of ships, bringing peaceful trade to countries throughout Asia and Africa.

As if being small and having S. Horten as his name isn’t bad enough, now 10-year-old Stuart is forced to move far away from all his friends. But on his very first day in his new home, Stuart’s swept up in an extraordinary adventure.

Noah Webster and His Words by Jeri Chase Ferris

A portrait of the man who wrote the first U.S. dictionary traces his youth as a bookish Connecticut farm boy and his twenty-year effort to write the all-American dictionary that was published in 1828 when he was seventy years old.

When Kansas Bloom moves to California and joins the Media Club at school, he soon finds himself trying to outdo one of the other fourth-grade students in a “dare war” while vying for the job of on-air video homeroom announcer.

Chickenhare and his turtle friend Abe find themselves on their way to be sold to Klaus, an insane taxidermist. With the help of two mysterious new companions, our heroes try to escape their dire fate, but they soon discover that might not be so easy when they get caught up in an adventure that could bring Klaus’s villainy to an end for good.

A picture book biography of Julia Child, the famous chef.

When ten-year-old Zeus is kidnapped, he discovers he can defend himself with a magical thunderbolt.

My 8-year-old son loves this series. We think of it as a starter Percy Jackson series.

Police detective Binky investigates the theft of a golden goose, the poisoning of Snow White, and other fairy tale crimes.

Offers morbidly-humorous, pun-filled, illustrated epitaphs for animals that poetically describe how they met their ends.

Hyde and Shriek: A Monsterrific Tale by David Lubar

Science teacher Ms. Clevis, one of the most popular teachers at Washington Irving Elementary School, splits into mean substitute Ms. Hyde and sweet sixth-grader Jackie after accidentally putting some chemicals into her breakfast smoothie.

Through a series of letters to his father, a private investigator, fifth-grader PJ “Clueless” McGee tells of his efforts to discover who stole macaroni and cheese from the school cafeteria.

Although mute, Delia quickly becomes part of the “family” at a most unusual orphanage, where classes include Fairy Tale Studies, a field trip may result in a monster sighting, and classmates include a hedgehog and a boy whose head is an onion.

Before becoming the first female private investigator in Botswana, eight-year-old Precious Ramotswe tracks down a thief who has been stealing her classmates’ snacks.

Lulu and the Duck In the Park by Hilary McKay

Lulu, who loves animals, brings an abandoned duck egg to school, even though her teacher has banned Lulu from bringing animals to school ever again.

I Don’t Believe It, Archie by Andrew Norriss

Strange things are always happening around Archie, but after he meets Cyd and makes friends with her, he finds these odd occurrences more enjoyable.

Dogs on Duty: Soldiers’ Best Friends on the Battlefield by Dorothy Hinshaw Patent

Readers will follow man’s best friend onto the battlefield, showing readers why dogs are uniquely qualified for the job at hand, how they are trained, how they contribute to missions, and what happens when they retire.

A collection of sixteen humorous poems about such strange creatures as the stardine, slobster, and magpipe.

Eight-year-old Iva is sure that she’s destined for greatness, and this summer Iva has big plans to make her first great discovery: finding General Braddock’s treasure, which was buried somewhere in her small town of Uncertain, Virginia during the French and Indian War.

The Golden Twine by  Jo-Anne Rioux

With monsters slipping through the mountains into the valley of Galatea, Suri, an orphan, dreams of
becoming a monster tamer.

The Story of Silk: From Worm Spit to Woven Scarves by Richard Sobol

From nurturing the silkworms to weaving the fabric and photographing the children as they proudly model the finished product, this first-person narrative, illustrated with richly detailed photographs, chronicles the amazing process of creating one of history’s most desired textiles.

Of course animals can be cute and cuddly, but they can be downright gross, too! Many animals use pee, poo, and even puke for drinking, eating, and protecting. This book covers all the nastiest habits of the most disgusting creatures on the planet.

Jack and the Baked Beanstalk by Colin Stimpson

After their café fails, Jack takes his mother’s last few pennies and exchanges them for a can of magic baked beans that then lead Jack on a journey to a giant who is bored with counting his fortune.

Stick Dog and his four friends – Stripes, Mutt, Poo-Poo and Karen – will do anything to steal some sweet-smelling hamburgers from a family at Picasso Park!

You Never Heard of Willie Mays? by Jonah Winter

A visual profile of the record-setting baseball star traces his Birmingham childhood, achievements in the Negro Leagues, and fame as a center fielder for the Giants.