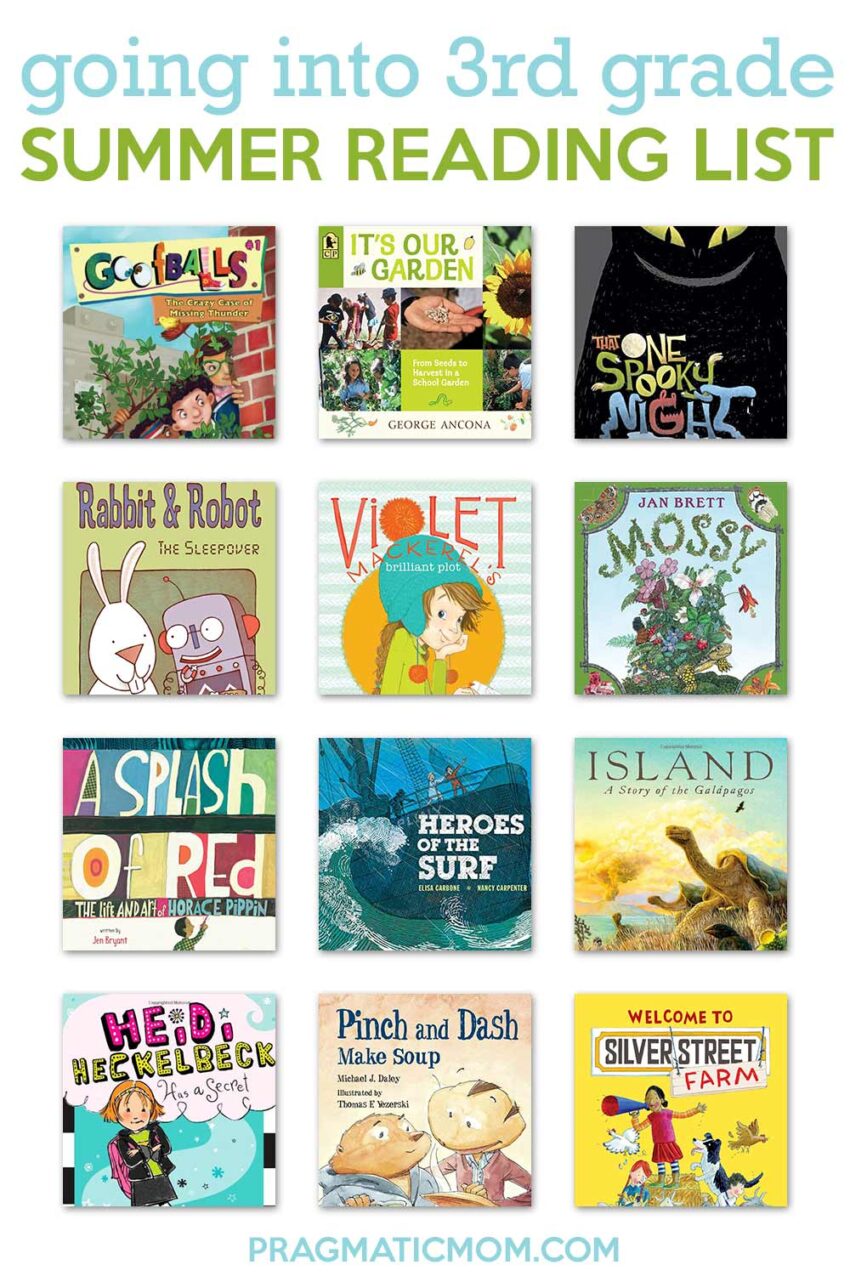 Use this great Summer Reading 2013 book list which is a collaboration of the Newton Public School Library Teachers & the Newton Free Children’s Librarians to find books for your kids this summer. Why use my list? Because these books will (hopefully) be on your shelves. They won’t be at my library shelves so I’ll be either going to a library one town over or using your library’s list!

I learned this trick a few years ago when I was frustrated trying to find great picture books and Every Single Book on the list was not there! I also offer you my daughter, PickyKidPix’s, very popular post on the chapter books she read as a 3rd grader. Her post outranks me on Google which is a source of endless checking and amusement for her.

The rest of the lists are here:

The Crazy Case of Missing Thunder by Tony Abbott

Long-time friends and fellow sleuths Jeff Bunter, Brian Rooney, Mara Lubin, and Kelly Smitts, collectively known as the Goofballs, investigate the disappearance of Thunder the pony in their town of Badger Point.

It’s Our Garden: From Seeds to Harvest in a School Garden by George Ancona

Want to grow what you eat and eat what you grow? Visit this lively, flourishing school and community garden and be inspired to cultivate your own.

That One Spooky Night by Dan Bar-El

There can only be one night a year when a broom will go in search of a witch, when mermaids might swim in a bathtub and when a house party can get a little too batty. Here are three strange stories about that one spooky night!

Rabbit and Robot by Cece Bell

Rabbit is excited about the sleepover he has carefully planned for his friend Robot, but Robot has some different ideas about how things should go.

When a creative seven-year-old girl spots a blue china bird that she desperately wants, she forms an imaginative plan for getting it.

Mossy, a turtle with a garden growing on her shell, is taken from her home and new friend to become an exhibit in a museum, until the director’s niece, Tory, notices how sad Mossy is and helps arrange for her to go home.

A Splash of Red: The Life and Art of Horace Pippin by Jen Bryant

Jen Bryant and Melissa Sweet team up once again to share this inspiring story of a self-taught painter from humble beginnings who despite many obstacles, was ultimately able to do what he loved, and be recognized for who he was: an artist.

*This is on my list for my rising 7th grader!

Heroes of the Surf  by Elisa Lynn Carbone

When the huge steamship on which they are traveling runs aground off the New Jersey coast in 1882, two boys and their families are among the passengers dramatically rescued by members of the U.S. Life Saving Service. Includes notes about the event on which the story is based.

Island: A Story of the Galapagos by Jason Chin

An island is about to be born- one that in time will become the home of plants and animals that exist nowhere else on Earth. This book is the biography of a Galápagos island- from birth, through adolescence, to adulthood, and beyond.

Heidi Heckelbeck has a Secret by Wanda Coven

After being homeschooled her whole life, Heidi Heckelbeck enters a traditional school in second grade, where she encounters a mean girl named Melanie who makes her feel like an alien.

Pinch and Dash’s disagreement over the use of pepper and hot sauce in their soup ends up spoiling the meal.

What are three city friends to do when a couple of newly adopted baby poodles turn out to be sheep and some eggs thought to be rotten hatch into ducklings?

Never Trust a Tiger: A Story from Korea by Lari Don

A merchant stops to help a tiger that is trapped in a hole but the tiger then tries to eat him, until the merchant convinces the beast to ask passersby if it is fair to repay good deeds with bad.

Shiver Me Timbers by Douglas Florian

In this hilarious collection of 19 pirate poems, readers will meet scoundrels, scalawags, and scurvy dogs (human “and” canine).

A whimsically illustrated guide to the inner life of dogs shares lighthearted insights into dog evolution and behavior while profiling common breeds and explaining what a dog experiences while looking at a sunset and smelling the ground.

*She’s a local author in our area!

Dreaming Up: A Celebration of Building by Christy Hale

A collection of concrete poetry, illustrations, and photographs shows how young children’s constructions, created as they play, are reflected in notable works of architecture from around the world.

Lady Hahn and Her Seven Friends by Yumi Heo

A seamstress banishes her tools from her sewing box when she hears them boasting, but she discovers that she cannot do her work without them.

To cure Jamie’s hiccups on the day of the school play, his classmates and some school employees try a series of spectacular cures until Jenna, star of the play, finds a simple way to scare them away.

Long ago, in a remote village in China, there lived a kind and generous little boy. One day, the boy made a wondrous discovery: a magic stone that caused his money jar and rice crocks to overflow, both of which he shared with the poor villagers. But strange things began to happen. It no longer rained. The crops died. The rivers dried up. The brave young boy, full of dreams of a white, water-spewing Dragon, took his magic stone on a journey and discovered how to save his village.

Morris Lessmore loves words, stories, and books, and after a tornado carries him to another land, dreary and colorless, he finds a single book in color that leads him to an amazing library where, he learns, the books need him as much as he needs them.

You Are Stardust by Elin Kelsey

This innovative picture book aims to reintroduce children to their innate relationship with the world around them by sharing many of the surprising ways that we are all connected to the natural world.

Captain Awesome to the Rescue! by Stan Kirby

When second-grader Eugene and his family move to a new neighborhood and he starts at a new school, he has a chance to bring out his superhero alter ego, Captain Awesome, to find the kidnapped class hamster.

Castle: How It Works by David Macaulay

Follows the planning, construction, and ultimate testing in a battle of a typical fortress with an adjoining town built by the English during the Middle Ages.

Brave Girl: Clara and the Shirtwaist Maker’s Strike of 1909 by Michelle Markel

An illustrated account of immigrant Clara Lemlich’s pivotal role in the influential 1909 women laborer’s strike describes how she worked grueling hours to acquire an education and support her family before organizing a massive walkout to protest the unfair working conditions in New York’s garment district.

What do you get when you combine a word and a number? A wumber! Paying tribute to William Steig’s CDB!.

Roger the Rat Is on the Loose! by Brooke Smith

Inspired by a notebook from her Aunt Bee, on whose farm she rescued several animals last year, Mimi advertises that she is available to help other animals in need and soon she and her three-legged dog, Maty, are on the trail of a lost rat.

When a schoolgirl gets separated from her tour of the White House and finds herself in the Lincoln bedroom, she also discovers the ghost of the great man himself.

Who Says Women Can’t Be Doctors? by Tanya Lee Stone

An introduction to the life and achievements of the first American female doctor describes the limited career prospects available to women in the early nineteenth-century, the opposition Blackwell faced while pursuing a medical education, and her pioneering medical career that opened doors for future generations of women.

Before he is known as the Babe, George Herman Ruth is just a boy who lives in Baltimore and gets into a lot of trouble. But when he turns seven, his father brings him to the gates of Saint Mary’s Industrial School for Boys, and his life is changed forever. There he’s expected to study hard and follow a lot of rules. But there is one good thing about Saint Mary’s: almost every day, George gets to play baseball.

The Insomniacs by Karina Wolf

When Mr. and Mrs. Insomniac and little Mika move twelve time zones away, they have trouble staying awake during the day and make an interesting discovery about themselves.