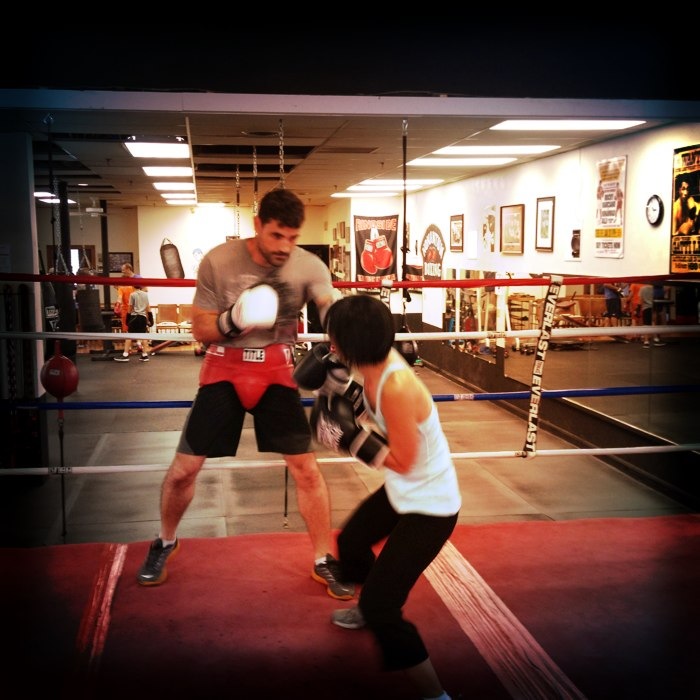 Now that it’s summer, my kids have certain weeks where they are completely unscheduled. I have masterminded their summer plans so that they each have at least one week off while the other two siblings are in camp. During this week, my husband takes the “only child” out to play golf with him and I take that same kid to box with me. Even kicking and screaming.

In the case of 11-year-old PickyKidPix, she was game to box. We had a lot of fun and she turned out to be a natural. Here she is learning how to wrap her hands.

Grasshopper and Sensei, my 13-year-old, had to be bribed to box. Her reasoning is that she’s learning martial arts for self defense so she would obviously use her legs to kick if attacked. There are no rules for self defense against a bad guy, she reasons correctly. She did end up liking boxing though, as I hoped she would. We did the second lesson together with no bribery needed.

My son is desperate to box with me. He’s been watching reruns of Power Rangers and all that martial art action has him doing flying sidekicks and spinning roundhouse kicks all over the house. Usually, I bear the brunt of his attacks as he entreats me to hold a pillow for him to use as a punching bag. Better the pillow than me!

My kids, however, don’t think I’m any good at boxing. The Path to Pugilism, it seems,  is strewn with skeptics, most of whom I live with. “Mom, he LETS you hit him. You aren’t actually good at sparring.” [Picture kids laughing hysterically.] “Your reflexes are like a snail’s. No, slower than that.” [Now, picture them thinking very hard of something slower than a snail. The best they can come up with is molasses which they are only slightly familiar with as they do not like baked goods with molasses in it.] “It’s so funny how you think you hit hard. You are tiny. You don’t hit hard. Trust me!”  [Picture them laughing so hard as to fall off their chairs.] Normally, I blow them off as 1) they’ve never actually watched me box and 2) this is their typical reaction to anything I do. [Can I say that there was much amusement in my house during my first few months of blogging 3 1/2 years ago when my first paycheck for the month came in at a hefty 69 cents?]

But, then I asked Grasshopper and Sensei to take some photos during our time boxing together. She’s my aspiring artist and she has a great eye. I asked for video too. [She insisted that I make very clear that all photo and video credit be given to her. Duly noted.]

I was shocked to see that  my boxing trainer never actually makes contact with me when he throws punches even though I’ve had several little chats about that. They went like this:

“Marc, you know my other kickboxing trainers would leave black and blue marks when we sparred. That’s totally ok with me. You need to make contact or I’ll never learn.”

“Please throw more punches faster and a little harder. AND LAND THEM!”

Yet, he just won’t. Or can’t. It must be that Italian-American gentleman thing. Or the fact that I’m old enough to be his mother. Maybe he thinks it evens up the disparity between our size and experience. I’m not sure.

One thing that I did NOT do this time was set an intention. [Don’t you love it when boxing and yoga collide?] I usually have one, just one — my brain can only handle one thought at a time — specific sparring goal that I articulate to my trainer. They have been:

I’ll be working on trying not to freeze when an incoming fist approaches my face. I’ll check back with you, dear readers, again as soon as I make some improvements on my Path to Pugilism. I know that you will be kinder to me than my children!

p.s. I had to look up the word pugilism too. In fact, there is a blog called The Road to Pugilism of a young lad in England. He has been training for about six months as well and is making great progress. I also believe that his house is not filled with skeptics. [He is wearing green in the first sparring video.]

Isn’t is funny that boxing has such a fancy synonym? You just don’t picture a sport like boxing with big words. Am I right? I mean, soccer’s other name is football! Boxing’s other name should be fistpunch. Pugilism is so high brow.

p.p.s. I’ve been getting tips via YouTube from Johnny of ExpertBoxing.com. Clearly, I need to watch this one a few more times but all of a sudden, it makes a lot more sense. I think that is what’s called having sense beaten into you.

31 thoughts on “My Path to Pugilism is Strewn With Skeptics”