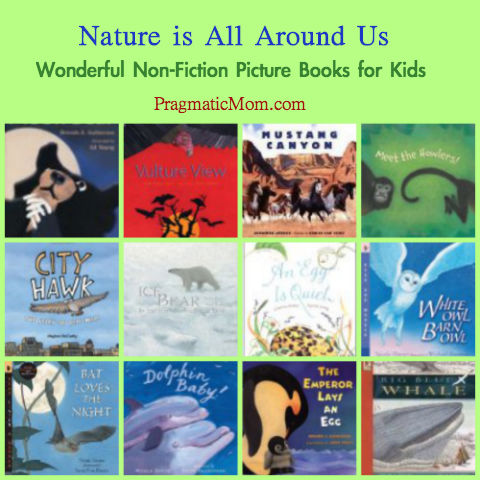 Please welcome my guest author Maria G. We met via social media and were conversing using the comments on my blog. I always find her comments to be thoughtful and helpful. She has a vast knowledge of children’s books and with the best recommendations so I asked her to please, please, please guest post on any children’s book topic!

Today, she is writing about nature — specifically best non fiction picture books for kids — and it just so happens that she is a non-fiction children’s book author-to-be with two books to look forward to in 2015!

Summer’s around the corner, and it’s the perfect time to learn about nature. The good news—you don’t have to journey to one of our fine National Parks to do so (though I would highly recommend it!) The answers are right in your backyard. Literally. Whether you’re a city or suburban dweller, or even if you’re lucky enough to live in the countryside, there are so many ways to observe how birds, mammals and other invertebrates have been able to adapt to urban and residential surroundings. Urban ecology is a fascinating field of study, and we can all be urban ecologists in our own neighborhoods!

City cemeteries are havens for many natural creatures. There are fields for hunting, digging and grazing; wooded and man-made areas for cover, and if there’s a water source, all the better! Take a stroll with your family in your local cemetery and jot down a list of creatures you see. I live in Waltham, a suburb of Boston, and Mount Feake Cemetery, which borders the Charles River Basin, is an ecosystem whose shoreline boasts a multitude of waterfowl: Canada geese, mute swans, herons, mallards, mergansers, goldeneyes, wood and other ducks. River otters swim with muskrats, eastern box turtles, and fish. Cottontails hop on the grass—watch out for the coyotes! There are raccoons, gophers, moles, and mice. And birds, too, of course! All of these creatures in one place! Take some photos of the creatures you recognize, and the ones you’d like to learn more about.

Don’t know that bird? Have a gander at Cornell Lab of Ornithology’s extensive birding website All About Birds. It’s chock-full of information on identifying birds, their habitats, dietary and nesting behaviors plus assorted cool facts. While you’re there, check out their webcams where you can watch the cycle of bird life from nest building, to egg laying, to hatchlings pipping through their shells. See them grow from bald and fuzzy hatchlings to feather-sprouted fledglings—it’s a mini-biology lesson playing out right before your eyes! Cornell’s site currently has webcams for viewing a red-tailed hawk pair, two species of ospreys, as well as great blue herons. There are also many other nesting webcams situated around the world where you can see a species as common as a cardinal, or as elusive as a great horned owl at a site such as View Nesting Birds.

Your own backyard can become a bird-bee-butterfly-bat sanctuary. In addition to putting out bird and hummingbird feeders, hang bird and bat houses. Bats are even better than mosquito zappers, with some species eating up to 3,000 mosquitoes in one night! Sometimes house finches and robins even enjoy nesting in hanging plants. As a robin once did in our pansy plant:

In fact, the Cornell lab is now sponsoring a contest about birds and their funky nest-building habits:Planting flowers such as butterfly bush, coneflower, black-eyed susans, honeysuckle, columbine and sunflowers attract finches, hummingbirds and butterflies which you and your child can observe. Hang yarn, fabric scraps, your own hair, or even dog/cat fur, and birds will add these fuzzy items to their nests. Include a birdbath for bathing and drinking and you have a backyard habitat.

City and suburban parks, such as the Public Garden in Boston, or even Central Park in New York City, are home to many different creatures despite being smack dab in the center of a city. More than 274 species of birds have been sighted in Central Park! Famous red-tailed hawk pairs, such as Pale Male, and his mate, Lola, who nested on an apartment building in New York City, spawned these lovely nonfiction picture books:

• Jeanette Winter, The Tale of Pale Male: A True Story

The Legend of Pale Male is also a fascinating documentary showing how this hawk enthralled so many residents of New York City.

Here are some red-tailed hawks near the junction of routes 95 and I-90 outside of Boston:

Would you ever have imagined exploring nature in the big apple?

Small city ponds, or water features, may contain fish, or frogs (in various stages of development), water insects, even turtles, and salamanders. There is a small body of water at the Newton Free Library which is home to fish, frogs, a mallard duck pair, and an occasional wild turkey. On a morning walk with my dog, Becca, I spotted a belted kingfisher perched in a willow above tiny Yakus Pond on Brandeis University’s campus.

These are drinking and bathing sources for birds, waterfowl, reptiles, amphibians and mammals. Sometimes all you need is a muddy puddle in a moderately wooded, somewhat shady area, and you’ll see frog eggs, or perhaps tadpoles, or even salamanders.

Stop and explore. Take a look at some books on these topics like Sarah Lamstein’s Big Night for Salamanders, or Melissa Stewart’s A Place for Turtles.

Nature is, actually, all around us. And for that, I am truly grateful!

I’m going to end with an extensive list of nature non-fiction books by some of my all-time favorite writers. The texts are lovely and lyrical, a blend of interesting facts told in narrative, often poetic form.

Is your child a birding buff?

• The Emperor Lays an Egg by Brenda Guiberson (emperor penguins)

• Even an Ostrich Needs a Nest: Where Birds Begin by Irene Kelly (nesting habits)

• A Hummingbird’s Life by Irene Kelly

Batty over bats? I am, and I adore this book: Bat Loves the Night by Nicola Davies, about a pipestrelle bat.

Delighted with dolphins? See the world through the eyes of a baby dolphin when you read Davies’s Dolphin Baby! She’s a zoologist by training, and also has a longer book called Wild About Dolphins (among many others on a multitude of science topics).

A sucker for sharks? Surprising Sharks by Nicola Davies, is fun and informative, and will indeed surprise you!

• Ice Bear: In the Steps of the Polar Bear by Nicola Davies

Dianna Hutts Aston’s books explore a variety of life and geological cycles. The illustrations by Sylvia Long are a feast for the eyes:

• An Egg is Quiet

• A Seed is Sleepy

• A Butterfly is Patient

• A Rock is Lively

Your backyard is waiting… have fun!

Maria is a nature, creature and dog lover who grew up near a farm in New Hampshire climbing trees, smelling maple syrup clouds, and slapping cow patties for fun! She still loves bird-watching and tracking for scat and other signs of life with her daughter, Anya, in the suburbs of Massachusetts, where she also lives with her German-scientist husband, Niko, and their Dixie Chick rescue dog, Becca. She is the author of Coyote Moon, a forthcoming nonfiction picture book on suburban coyotes (Roaring Brook Press, 2015), as well as two forthcoming fiction picture books about a girl named Penny and her beloved dog, Jelly, (Houghton Mifflin Harcourt, 2015). 21 thoughts on “Nature is All Around Us! Best Non Fiction Picture Books for Kids”