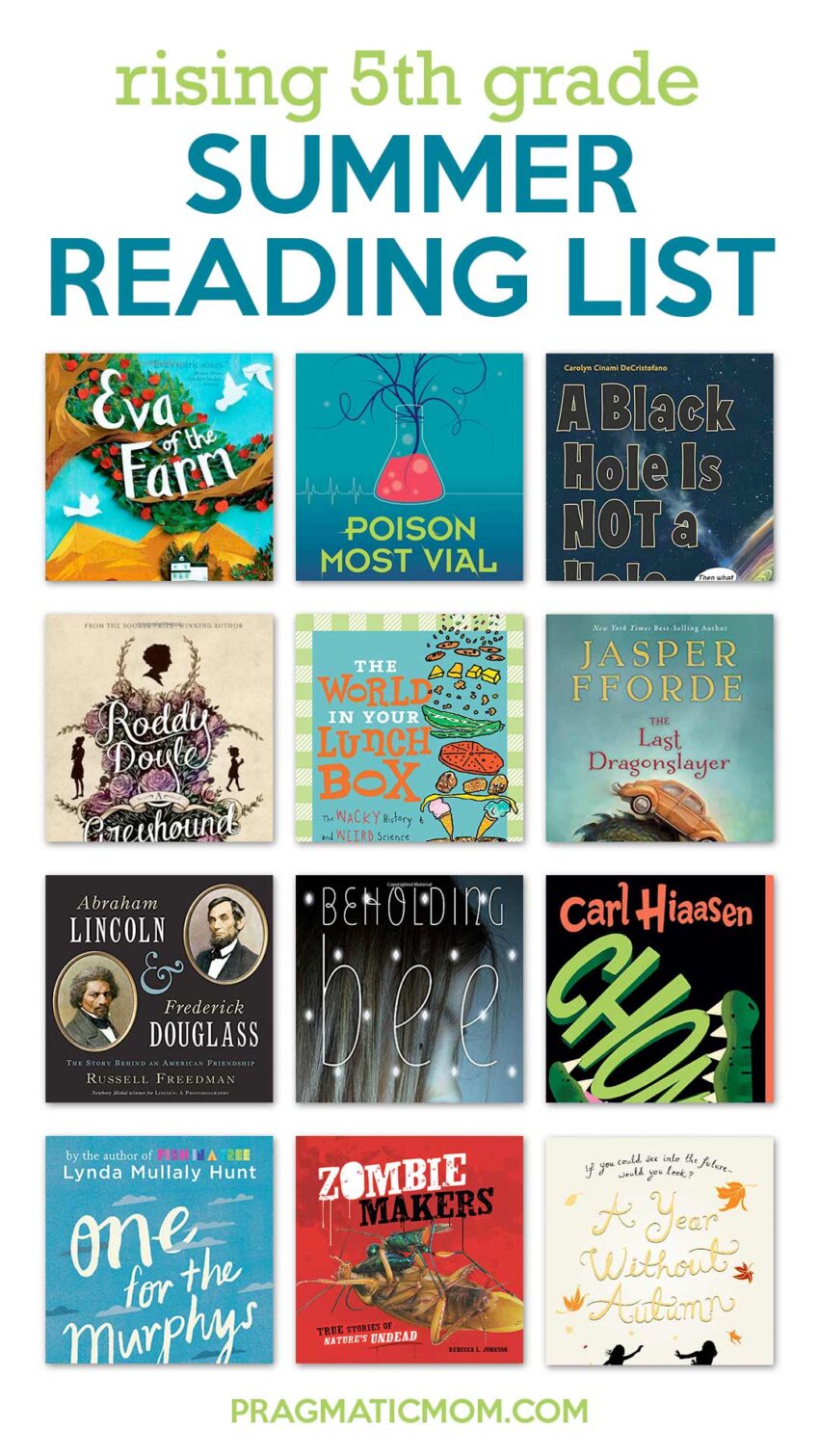 This great summer reading list is the result of a fruitful collaboration between the Newton Public School Library Teachers & the Newton Free Children’s Librarians. I’ve discovered a secret: don’t use your school’s summer reading list, use MINE instead. Why? Your list of books will never be on your library bookshelves because your entire town is trying to check them out. Ditto for my list in my town.

Let’s swap lists instead! My rising 5th Grader, PickyKidPix, has her own list of 5th grade chapter books. Many of the books she recommends are on this list below.

See you at the library! Please share what you are reading this summer with your kids!

Eva of the Farm by Dia Calhoun

Twelve-year-old Eva writes beautiful poems on the farm in Washington State that her family has owned for generations, but when the money runs out and then her baby brother gets sick, the family faces foreclosure and the way of life she loves is threatened.

Poison Most Vial by Benedict Carey

When a famous forensic scientist turns up dead and Ruby’s father becomes the prime suspect, Ruby must marshal everyone she can to help solve the mystery and prove her father didn’t poison his boss.

A Black Hole Is Not a Hole by Carolyn Cinai DeCristofano

Introduces black holes, describing their physical features, how they were discovered, what causes them, and where they exist in space.

Greyhound of a Girl by Roddy Doyle

Mary O’Hara is a sharp and cheeky twelve-year-old Dublin schoolgirl who is bravely facing the fact that her beloved Gran is dying. But Gran can’t let go of life, and when a mysterious young woman turns up in Mary’s street with a message for her Gran, Mary gets pulled into an unlikely adventure.

The World in Your Lunch Box by Claire Eamer

Explore a week of lunches, from apples to pizza, by taking a romp through thousands of years of extraordinary events. Some are amusing, like the accidental invention of potato chips. Others are tragic, such as the Spice Wars, which killed thousands of people.

The Last Dragonslayer by Jasper Fforde

Fifteen-year-old Jennifer Strange runs an agency for underemployed magicians in a world where magic is fading away, but when visions of the death of the world’s last dragon begin, all signs point to Jennifer and Big Magic.

Abraham Lincoln and Frederick Douglass: The Story Behind and American Friendship by Russell Freedman

A clear-sighted, carefully researched account of two surprisingly parallel lives and how they intersected at a critical moment in U.S. history.

In 1942, when life turns sour at the carnival that has always been her home, eleven-year-old Bee takes her dog, Peabody, and piglet, Cordelia, and sets out to find a real home, aided by two women that only Bee and her pets can see.

When the difficult star of the reality television show “Expedition Survival” disappears while filming an episode in the Florida Everglades using animals from the wildlife refuge run by Wahoo Crane’s family, Wahoo and classmate Tuna Gordon set out to find him while avoiding Tuna’s gun-happy father.

After heartbreaking betrayal, Carley is sent to live with a foster family and struggles with opening herself up to their love. My review here.

Are zombies real? Scientists know this for sure: dead people do not come back to life and start walking around, looking for trouble. But there are things that can take over the bodies and brains of innocent creatures, turning them into senseless slaves. Meet nature’s zombie makers–including a fly-enslaving fungus, a suicide worm, and a cockroach-taming wasp.

A Year Without Autumn by Liz Kessler

Twelve-year-old Jenni’s much-anticipated vacation with her family and best friend Autumn goes awry when an old elevator transports her to a future in which everything has changed, and she must not only return to her time but find a way to prevent what she has seen from coming true.

The Vindico by Wesley King

When supervillains of the Vindico realize they are getting too old to fight the League of Heroes, they kidnap and begin training five teens, but James, Lana, Hayden, Emily, and Sam will not become the next generation of evil without a fight.

See You at Harry’s by Jo Knowles

Twelve-year-old Fern feels invisible in her family, where grumpy eighteen-year-old Sarah is working at the family restaurant fourteen-year-old Holden is struggling with school bullies and his emerging homosexuality, and adorable, three-year-old Charlie is always the center of attention, and when tragedy strikes, the fragile bond holding the family together is stretched almost to the breaking point.

Due to an administrative mix-up, troublemaker Donovan Curtis is sent to the Academy of Scholastic Distinction, a special program for gifted and talented students, after pulling a major prank at middle school.

Madeleine L’Engle’s A Wrinkle in Time: The Graphic Novel by Hope Larson

A graphic novel adaptation of the classic tale in which Meg Murry and her friends become involved with unearthly strangers and search for Meg’s father, who has disappeared while engaged in secret work for the government.

In 1958 Little Rock, Arkansas, painfully shy twelve-year-old Marlee sees her city and family divided over school integration, but her friendship with Liz, a new student, helps her find her voice and fight against racism.

Combines photography with lyrical text celebrating the animal world, in a compilation that includes works by such poets as Emily Dickinson, Robert Frost, and Rudyard Kipling.

The Fairy Ring: Or, Elsie and Frances Fool the World by Mary Losure

Frances was nine when she first saw the fairies. They were tiny men, dressed all in green. Nobody but Frances saw them, so her cousin Elsie painted paper fairies and took photographs of them “dancing” around Frances to make the grown-ups stop teasing. The girls promised each other they would never, ever tell that the photos weren’t real. But how were Frances and Elsie supposed to know that their photographs would fall into the hands of Sir Arthur Conan Doyle? And who would have dreamed that the man who created the famous detective Sherlock Holmes believed ardently in fairies — and wanted very much to see one? A delight for everyone with a fondness for fairies, and for anyone who has ever started something that spun out of control.

The Adventures of Achilles by Daniel Morden and Hugh Lupton

The story of Achilles, the son of a king and a goddess, who led the Greek armies during the Trojan War.

One Times Square: A Century of Change at the Crossroads of the World by Joe McKendry

One Times Square explores the story of this fascinating intersection, starting when Broadway was a mere dirt path known as Bloomingdale Road, through the district’s decades of postwar decay, to its renewal as a glittering, tourist-friendly media mecca.

Temple Grandin: How the Girl Who Loved Cows Embraced Autism and Changed the World by Sy Montgomery

A portrait of Temple Grandin’s life with autism, and her groundbreaking work as a scientist and designer of cruelty-free livestock facilities.

The False Prince by Jennifer Nielsen

In the country of Carthya, a devious nobleman engages four orphans in a brutal competition to be selected to impersonate the king’s long-missing son in an effort to avoid a civil war.

When Clara vanishes after the puppeteer Grisini and two orphaned assistants were at her 12th birthday party, suspicion of kidnapping chases the trio away from London and soon the two orphans are caught in a trap set by Grisini’s ancient rival, a witch with a deadly inheritance to shed before it is too late.

A collection of sports stories featuring everything from fighting to friendship, set everywhere from the tennis court to the hockey rink.

We love this series and the sports angle is sure to get reluctant boy readers happily reading.

Jake and Lily by Jerry Spinelli

Jake and Lily are twins and have always felt the same–like two halves of one person–but the year they turn eleven and Jake begins hanging out with Bump Stubbins, everything changes.

When cardboard creatures come magically to life, a boy must save his town from disaster.

Where Do Presidents Come from? by Michael Townsend

In this book, Townsend introduces kids to the lives and responsibilities of the president of the United States, as well as the constitutional separation of powers and the history of the White House.

An Odyssey-like adventure of two boys’ incredible quest on the Appalachian Trail where they deal with pirates, buried secrets, and extraordinary encounters.

My review here. This one is on everyone’s shortlist for a 2014 Newbery.