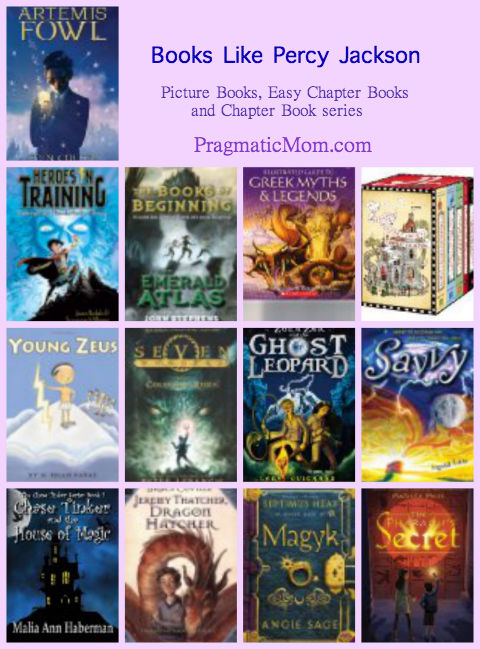 We might be in the same shoes. My son just finished all the Rick Riordan books which kept us happily reading for the better part of the school year. But now we are adrift, desperately seeking more books like Percy Jackson.  Riordan’s books are so exciting, we often stay up past my son’s bedtime for “just one more page.” We want more of those types of books.

We also like the special powers conferred by lineage to gods. Deep down, my son and I both feel that we are Half Bloods and/or godlings just waiting to discover our latent powers. It hasn’t happened yet but we’re not discouraged.

Learning about ancient Mythology from any civilization is a welcome bonus. I like it because we feel smarter for knowing about gods and heroes and the learning is so pleasant that it doesn’t feel like work.

I think any age is the perfect age to read about mythology. I’ve gathered up our favorite Riordan-like Percy Jackson books as well as mythology picture books and easy chapter books. I also have a collection of Mythology Books for Kids on Pinterest.

Karas has carefully researched mythology on Zeus’ youth to create this wonderful picture book that stays true to its classic origins. Young kids will love the story and older kids will still get something out of it. It’s a picture book that manages to bridge a wide span of ages. [picture book, ages 4 and up]

While the Midas myth is not true to Greek Mythology, Max and Ruby are very appealing to young kids so this is a nice way to make a connection to a classic tale. [picture book, ages 2 to 5]

We are really enjoying this early chapter book series on the young Greek gods even though it’s not true to Greek mythology. I think of it as a warm-up to the Percy Jackson series. [early chapter book, ages 6 and up]

My middle child had issues with this series because the Greek myths are not accurate and there are mean girls/goddesses. It’s harmless though it’s not my favorite. [early chapter book, ages 6 and up]

I love this first book of what seems like a series that emulates The Kane Chronicles but places the action and mythology in India. Guignard went to boarding school in India so you also get a real flavor of life in India mixed with magic, Hindu gods, and time travel adventure. It’s a heady mix! [chapter book, ages 7 and up]

Some prefer this book to The Kane Chronicles and I think it’s because it has all the same elements of latent powers, ancient Egypt, and action adventure. What makes this book more accessible is that it limits the scope of the history to one particular time — the female Pharaoh Hatshepsut — and the mystery surrounding her death and afterlife. [chapter book, ages 7 and up]

The Curse of the Night Witch: Emblem Island by Alex Aster

I really liked the premise of this fantasy book of kids having pre-ordained “palm reading” futures with a little bit of wiggle room to change their destiny. In this case, on Emblem Island, twelve-year-old Tor Luna is unhappy with his leadership emblem. Though it’s prestigious and bodes for a successful future, his life was also going to be boring. In order to change his fate, he makes a wish that comes true but the outcome is a curse, not a blessing. Now he has to find the Night Witch on a dangerous journey to fix his fate.

My issue with this book is that the characters feel flat, like paper dolls rather than living human beings. I’m not sure why. Is it Show Don’t Tell? Not completely. Should there be more dialogue? Maybe… It’s that I don’t understand why Tor wants to be a Water Breather so badly other than he likes to swim. I didn’t understand his internal motivation. His friends felt like archetypes.

The publisher describes this book as perfect for fans of Aru Shah and the End of Time. To me, it’s more similar to The Unwanteds. [middle grade, ages 8 and up]

Chapter Book Series with Magic Powers but without Mythology

The Emerald Atlas (Books of Beginnings) by John Stephens

Called “A new Narnia for the tween set” by the New York Times and perfect for fans of the His Dark Materials series, The Emerald Atlas brims with humor and action as it charts Kate, Michael, and Emma’s extraordinary adventures through an unforgettable, enchanted world.

It’s an orphanage version of Percy Jackson with three siblings so it has a sadder undercurrent. It’s not exactly like Percy Jackson since it lacks the mythology connection but it’s close. [chapter book series, ages 9 and up]

Septimus Heap, the seventh son of the seventh son, disappears the night he is born, pronounced dead by the midwife. That same night, the baby’s father, Silas Heap, comes across an abandoned child in the snow — a newborn girl with violet eyes. The Heaps take her into their home, name her Jenna, and raise her as their own. But who is this mysterious baby girl, and what really happened to their beloved son Septimus?

Grasshopper and Sensei liked this series when she was in 5th grade. It’s perfect for Harry Potter fans who need a slighter easier, less thick book but want an action-adventure fantasy series centered around magic. [chapter book, ages 8 and up]

When I read this review from The Brain Lair, I thought this sounded like a great Percy Jackson-like series.

Midnight for Charlie Bone (The Children of the Red King, Book 1) by Jenny Nimmo

My oldest liked this action adventure fantasy series too. Kids with special powers who get sent to a special school is a popular theme! In the case of Charlie Bone, he has an unusual gift in that he can hear people in photographs talking! Add in scheming aunts and a boarding school where secrets and dangers lie ahead. Sounds like Harry Potter? Perhaps!

Grasshopper and Sensei loved this extremely fast-paced action-adventure series based on high tech hybrid kids who can fly. It has crazy plot changes like the movie Total Recall where everything you think is real is a dream or a fake memory.

This is a country bumpkin version of Percy Jackson in which the Beaumont kids get a special power called a savvy once they turn thirteen. One caveat:  all the kids agree that they love Savvy but are disappointed by the sequel Scumble.

5th grader This Kid Reviews Books turned me on to this series which sounds like it might please the Percy Jackson crowd.

I found more recommendations are from Rick Riordan himself but I edited out books that were YA and more violent than Riordan’s such as The Hunger Games (an excellent series but I would hold off until kids are in 5th grade in a perfect world). It’s actually ironic to me that Riordan’s books are also labeled as Young Adult because I know parents who read Percy Jackson to their kindergarteners and first graders who are reading this independently. And in terms of content, I have no problem with that.

And many other titles in his Magic Shop series. These are easier reads, ideal for 2nd-4th grade. Both my boys loved these.

The Thief Lord by Cornelia Funke

My favorite by this author. It’s a fast-paced read with a great premise and interesting characters. Grades 4th-7th.

Airborn and Skybreaker by Kenneth Oppel

Adventure novels in the tradition of Treasure Island and Jules Verne, but with a modern sense of storytelling. These take place in a world where airplanes were never invented, and dirigible airships rule the skies. Grades 6th-8th. Again, my son Haley ate these up.

Gods of Manhattan by Scott Mebus

An interesting new take on mythology in New York. Rory and Bridget discover a hidden world in New York City where spirits of the past live on and sometimes become gods. If you liked the Gregor books, you may well enjoy this. Grades 5-7.

A funny fantasy/mystery series featuring a detective who just happens to be a fire-throwing skeleton. Grades 4th-7th. I don’t “blurb” many books, but this one I recommend without hesitation. My whole family loves them.

The Bartimaeus Trilogy by Jonathan Stroud

The first title is The Amulet of Samarkand. A more challenging series, but brilliant stuff. A young London magician summons an ancient djinn to help him with his problems. Grades 6th-8th.

A nine-book series of graphic novels. And yes, comics absolutely qualify as reading! My sons and I all enjoyed this series – fast, high-interest reads with plenty of action, humor, romance and fantasy. Pretty much everything you could want, and the coolest red dragon ever. Grades 4-8.

A brother and sister discover that their grandfather is the caretaker at a wildlife reserve for mythical creatures. The first book in a series: wonderful premise, great characters, page-turning adventure. Grades 4-8.

Four gifted children join a secret society to combat evil. This reminds me of Roald Dahl and Norton Juster — lots of humor, puzzles, and intriguing mysteries. Some great surprises at the end, too. Grades 4-7.

The Alchemyst by Michael Scott

First in a series about two siblings who are plunged into a world of immortals and mythological creatures. A fast-paced fantasy set in the modern world. Grades 5-8.

Heroes, Gods and Monsters of the Greek Myths by Bernard Evslin

Much better storytelling than D’Aulaires, in my opinion.

Another great anthology for young readers. I used this as my classroom text for 5th-6th grade when I taught English in San Francisco.

A little hard to find, but very accessible, with high-interest illustrations. And when in doubt, always ask your local librarian or independent bookseller. They are a wealth of information when it comes to kids’ books.