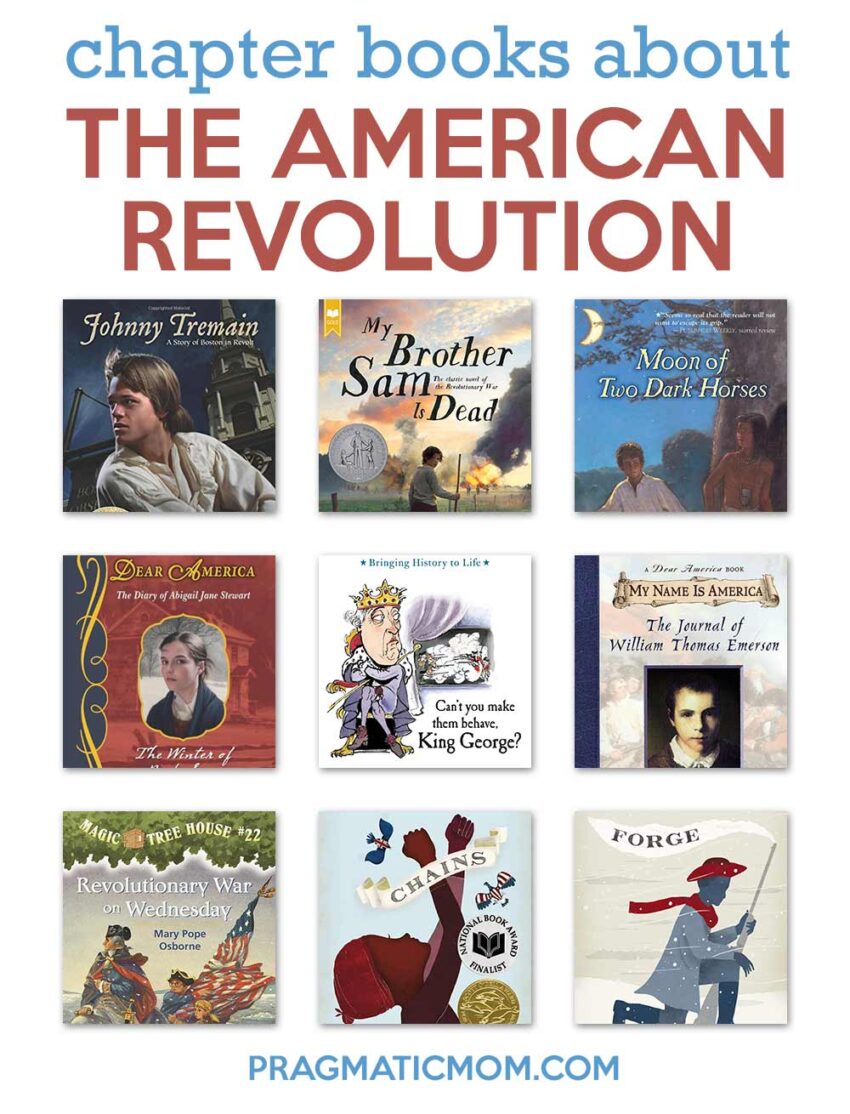 Go back in time and learn important history with these American Revolution books for kids! Includes picture books and chapter books.

To go with our field trip on the Boston Freedom Trail, I’ve found American Revolution books for kids for different ages. More importantly, they share different perspectives. You’ll meet a silversmith apprentice, a Tory loyalist, a runaway slave, a Native American and even King George.

History is written by the victor. Can you imagine what life must have been like during this tumultuous period of the birth of the United States? If you read all ten books, you might feel like you were there! These books support the 5th grade Common Core Curriculum unit for the American Revolution.

I don’t know if kids read this chapter book anymore but it was one of my favorite books as a child. Johnny Tremain is fourteen and apprenticed to a silversmith and I always pictured that this is what it must have been like to work for Paul Revere.

Johnny has a terrible accident: molten silver burns his hand, destroying his dreams of becoming a master silversmith.

A depressed Johnny finds work as a dispatch rider for the Committee of Public Safety. This job that brings him in touch with Boston patriots—and the excitement that will lead to the Tea Party and the Battle of Lexington. [chapter book, ages 9 and up]

My Brother Sam is Dead by James Lincoln Collier

A family divided by war. Tim Meeker has always looked up to his brother Sam, who has now joined the American Revolution. His parents support King George. Tim will have to make a choice — between the Revolutionaries and the Redcoats . . . and between his brother and his father. [young adult, ages 12 and up]

The Revolutionary War from the Native Indian perspective:

Coshmoo and Daniel have been best friends as long as the Delaware Indians and white settlers have lived peacefully along the Susquehanna River. But now the river is red with blood as people from both sides are killed in the Revolutionary War. The British king wants Coshmoo’s people to fight on his side and holds out the promise that their land, which has been taken by the settlers, will be returned to them. As the tension grows, Coshmoo and Daniel vow-as they have so many times-to remain loyal friends, no matter what happens. Then, one day, their friendship comes up against the ultimate test. [chapter book, ages 10 and up]

Eleven-year-old Abigail Jane Stewart’s fictionalized diary about her life, family, friends, and neighbors, and the sides they have to choose in Valley Forge, Pennsylvania, during the height of the Revolutionary War, renders a vivid portrayal of one of the most memorable and crucial winters in American history. [chapter book, ages 9 and up]

Can’t You Make Them Behave, King George? by Jean Fritz

This entertaining volume sheds light on the life of England’s King George III. It begins when he was a bashful boy who blushed easily. It goes on to his early days as king, and finally examines his role in the American Revolution – when Americans ceased to think of him as good King George. [easy chapter book, ages 7-9]

The American Girl Doll books are wonderful for girls ages 7 and up.  Felicity is a fictionalized American girl in colonial Williamsburg from 1774 to 1776. [chapter books, ages 7 through 9]

My Name Is America: The Journal of William Thomas Emerson, A Revolutionary War Patriot by Barry Denenberg

In 1774, 12-year-old orphan Will is befriended by Mr. Wilson, who secretly works with a group of rebels against the British. Written as a series of journal entries, this book paints a vivid picture of the period from the point of view of a boy on the fringe of an important movement. Unlike some books of historical fiction, the focus here isn’t on landmark events or fictional meetings with famous people but rather on everyday life in a troubling time. Will makes an appealing narrator, brave and independent enough to take a small part in dangerous intrigues, but young and frank enough to relate his reactions to events with freshness and disarming candor. An appended note, “Life in America in 1774,” fills in the historical events and background of the time and provides reproductions of engravings, maps, and documents. A solid addition to the My Name Is America series. Carolyn Phelan from Booklist [chapter book, ages 9 and up]

General George Washington is about to lead his army in a sneak attack against their enemy. But now a terrible weather is making the great general question his plans. Can Jack and Annie keep history on track? The fate of the country rests in their hands! [early chapter book, ages 6-9]

PickyKidPix read both Forge and Chains and highly recommends them. She told me that they are about slaves during Colonial America. Forge is about runaway slaves during the American Revolution.  [chapter books, ages 10 and up]

The Chains story continues with a perspective shift from Isabel to Curzon. Both runaway slaves, they must forge a path to win their freedom in the midst of the American Revolution. [chapter book, ages 10 and up]

This book tells the story of the Boston Tea Party of 1773. You’ll read about the arrival of the ships full of controversial taxed tea in Boston Harbor.

You’ll also experience the explosive protest meetings at the Old South Church. And of course, the defiant act of dumping 226 chests of fine tea into the harbor on December 16.

Friends of Liberty by Bernice Gormley

Friends of Liberty takes the reader right to the Boston Tea Party but does not include it.  The focus is really on the friendship between the two girls and how easily one can lose sight of what and who is important when blinded by the materialist luxurious life of others. Review from The Children’s War.