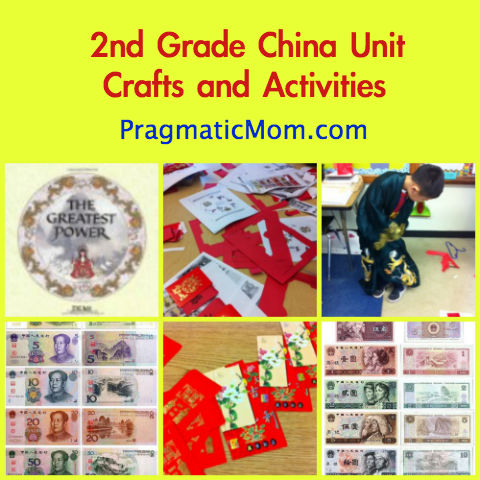 My mom friend Stella who is Chinese explains the ins and outs of Chinese Red Envelope etiquette and significance to 2nd grade kids. We did a special presentation as part of their 2nd grade China Unit that included: the Chinese invention of paper money, red envelope craft and background, Chinese silk children’s clothes, and Chinese money. It was a lot of fun!

Red envelopes are used to give gifts of money.  When I was a little kid, I would get red envelopes from older relatives on holidays, my birthday, or if I hadn’t seen someone for a long time.  When I got older, I also got red envelopes when I graduated from school, when I got married and even when my grandfather passed away.

For Chinese New Year, only married people give red envelopes away to children and young single people (one of the downsides of getting married!).  The more money you give away, the more luck you will have for the new year.

Chinese are very superstitious.  Even numbers are thought to be better luck than odd numbers so for better luck, a person would give someone two red envelopes instead of one.  4 is a bad luck number so you never want to give amounts of 4 like $4, $40, $44 and so on.  The number four in Chinese sounds like the word for die/death.  What’s another example of a bad luck amount??

8 is the luckiest number so if you want to give someone $8 you would put $5 in one envelope and $3 in another or whatever combination you like but not $4 and $4!  The number 8 in Chinese sounds like the word for wealthy. The color red is for good luck and so the envelopes are red.  When a bride gets married, she wears a red silk dress and not white.  For Chinese New Year, everyone wears a new red outfit usually made of silk.  When someone gives you a red envelope, you should take it with two hands and not one.  This is the polite way of doing it and you should never never open the envelope in front of someone.  That would be very bad manners.  Also, never put old wrinkled bills in a red envelope.  People never write their names on the outside of red envelopes so you have to remember who gave you which envelope!

There are Chinese characters on the outside of red envelopes.  On wedding red envelopes you might see the symbol of double happiness.  On the template that the children are doing, it says Food=Luck.  A friend of mine translated it for me.  Having food is so important since most Chinese have the bare minimum of food (back in the old days – pre-open capitalism).

This is the printable Chinese Red Envelope craft from Martha Stewart. We combined this craft with the print out of Chinese money. The Chinese Invented Paper Money! (And a lot of other things!)

I used to pull this information from Computer Smiths for the 2nd grade China Unit to cover about the invention of paper money:

The Song dynasty was the first to issue true paper money in 1023, and it did so at first cautiously, issuing small amounts, used in a limited area, and good for a specific time period.

The most famous Chinese issuer of paper money was Kublai Khan, the Mongol who ruled the Chinese empire in the 13th century. Kublai Khan established currency credibility by decreeing that his paper money must be accepted by traders on pain of death. As further enforcement of his mandate, he confiscated all gold and silver, even if it was brought in by foreign traders. By the 15th century even China had more or less given up paper money.

Over this period, paper notes were issued irresponsibly, to the point that their value rapidly depreciated and inflation soared. Then beginning in 1455, the use of paper money in China disappeared for several hundred years. This was still many years before paper currency would reappear in Europe, and three centuries before it was considered common.

The Greatest Power by Demi has a two page spread that include some of the inventions by the Chinese. It’s a great story with beautiful illustrations. We used these links to print out Chinese money for the kids to play with. They cut it out and used it for the Red Envelopes. They even remembered not to put in money that adds to the number four. You could play additional games with the money:

Match the front to the backs as a match game. Silk is Another Chinese Invention (and Boys Love to Dress Up in Chinese Robes!)

Who knew that the boys would be so eager to dress up?! I think it’s because the Chinese silk dressing robes reminded them of boxers in a ring. I only caught that connection when two boys, enrobed in silk, tried to spar each other. I had to put a stop to that. A mom friend Melissa brought in these lovely clothes. It was a big hit with the kids! The 2nd graders had an earlier field trip to the local Chinese Cultural Center where they made and ate dumplings, played with Chinese Yo Yos, and watched Chinese Traditional Dance. If you don’t have that kind of resource, I found a video that covers Chinese Dance. They do a show in town but watch up to minute 9, the rest of the video is anti-Communist propaganda which the kids won’t really understand. Grasshopper and Sensei painted this for her Chinese New Year party in Middle School that wasn’t to be.