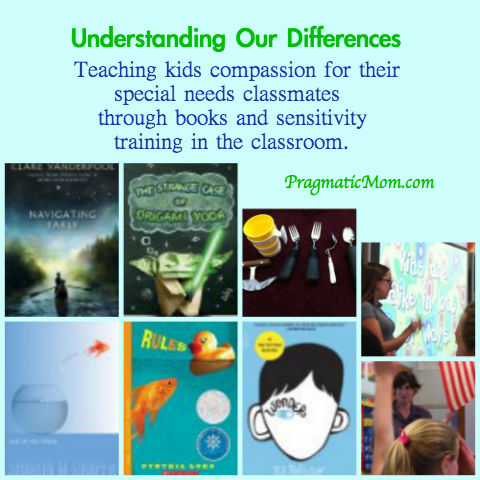 I volunteered in the 5th grade a few weeks ago for a really great program run by volunteer moms called Understanding Our Differences. I believe we purchase curriculum from a Newton based non-profit with the same name which was started by a Newton parent with a special needs child. It’s basically sensitivity training for grades 3 through 5, possibly even younger.

Understanding Our Differences sponsored author R. J. Palacio of Wonder as well to speak at our local high school as well and I run into them on Twitter. Small world, isn’t it?

I am not a coordinator. I just show to help run the breakout sessions. This was the final session for the 5th graders and we combined in two units that day: Physical Disabilities and Autism Spectrum Disorders, focusing on Asperger’s Syndrome. It took about 2 1/2 hours to do both units. There is presentation by the mom coordinator who gives an overview of the unit. This is followed by a short film and then hands on break out sessions. The final piece is having Special Need high school students present as a panel. They each will have a short speech and then take questions. It’s really amazing to have those high school kids present. It brings it all home in a really meaningful way. One big takeaway message is finding more similarities than differences. There was also a person who signed the presentation. The video showed a young paraplegic man who used amazing computer technology to live and work independently.

The first breakout session was looking at adaptive technologies for those with physical disabilities. The kids could hold the object and guess how it worked. The grabber claw was especially popular and amazingly versatile with the ability to pick up very small and slippery objects. The second presentation for Asperger’s Syndrome had two interesting challenges. My group had 5 minutes to do this worksheet while exposed to extremely loud and disruptive noises. No one was able to complete the worksheet. The other group had to do a 50 piece puzzle with limited ability to communicate. Does this training work? The proof was in the panel of five high school kids who have Asperger’s Syndrome. One of the boys said he was in this very same Understanding Our Differences training on Asperger’s Syndrome seven years ago when he was a 5th grader. The atmosphere felt encouraging so he raised his hand and told all his classmates that he had just been diagnosed with Asperger’s Syndrome. The result was that he had a relatively smooth transition to middle school and high school. Kids stood up for him when he was bullied. They were also more patient with him since they understood, just a little, of what life was like for him. The others weren’t so lucky and their middle school experience was more isolating.

I don’t know how the program works if you are interested in it for your school but you can go here for more information. If your school’s budget can’t swing it, I would also suggest books with special needs characters as a way to teach typicals compassion for their special needs classmates.

The Strange Case of Origami Yoda by Tom Angleberger

It’s not clear but it’s possible that Dwight has Asperger’s Syndrome. He’s strange and kids avoid him or tease him until they realize that he dispenses wise advice that he can’t seem to follow himself using a paper origami Yoda puppet. Dwight’s classmate Tommy creates a case file  with contributions from his 6th grade classmates to understand if Yoda is a true wonder or just a coincidence. [chapter book, ages 8 and up]

“If every person in this room made it a rule that wherever you are, whenever you can, you wil try to act a little kinder than is necessary – the world really would be a better place. And if you do this, if you act just a little kinder than is necessary, someone else, somewhere, someday, may recognize in you, in every single one of you, the face of God.”
― R.J. Palacio, Wonder

It’s no wonder that Wonder was chosen by Understanding Our Differences for an author event! [chapter book, ages 8 and up]

Out of My Mind by Sharon M. Draper

11-year-old Melody has Cerebral Palsy so she can’t walk or talk and has to depend on assistance to do basic things like eat. But she also has a photographic memory that isn’t so obvious. Her classmates and most adults don’t realize how smart she is. Will an academic competition finally prove to the world that she’s not academically challenged? [chapter book, ages 9 and up]

Vanderpool doesn’t say what special need Early has but it’s possible that he has Asperger’s Syndrome. He makes an unlikely friendship with Jack who joins his military boarding school in Maine after Jack’s mother dies. Together, they set off on an adventure tracking a bear, following a story of Pi, and finding their footing in an ever changing world. [chapter book, ages 9 and up]

From Ink and Pen: 5 YA Characters with Aspergers

p.s. I had included Rules by Cynthia Lord but Ettina enlightened me with this review  of Rules from Disability in KidLit. Thank you for helping me overcome my ignorance.

Disability in KidLit Review of Rules by Cynthia Lord:

“Throughout the book Catherine talks about wishing she had a normal brother—wishing David wasn’t autistic. The way this is written, along with Catherine’s constant use of rules in an effort to change David, is alarming. With a constant focus on the need for a “cure” for autism, something myself and a large portion of the autistic community are against, the usage of this in a children’s book honestly scares me. Rather than promoting acceptance, this is showing that autistics need to be changed or cured.”

What if your brother is severely Autistic such that he always stands out? 12-year-old Catherine wants a normal life, just once. Twelve-year-old Catherine just wants a normal life so she teaches her brother rules to fit in better. But when she meets Jason, a new friend/boyfriend?!!, his physical disabilities are both a bridge and a barrier. Will her best friend Kristi understand? [chapter book, ages 9 and up]