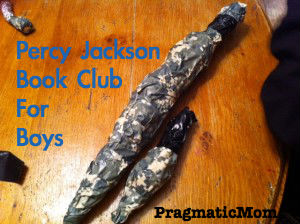 When the book club rolled around though, I was tired with low energy so I ended up doing a very low-key book club. No blue food. Spaghetti and meatballs delivered instead. The first thing we did was break out the duct tape which I had purchased at Staples a few weeks ago and squirreled away. I had a new roll of heavy-duty aluminum foil, tape, copy paper, and scissors.

When my kids made duct tape swords a while ago, the girls carefully made forms from copy paper and tape and then covered them in duct tape. They were surprisingly sturdy! The boys eschewed copy paper for the foil. They managed to use an entire roll. They seemed to prefer sculpting their weaponry from the foil, crushing and molding it until they got it just right. Then, they covered the foil in duct tape. The black duct tape came in a huge roll. I should have bought grey duct tape from Home Depot too because you can get huge rolls quite inexpensively and use it as the first layer around the foil. While we constructed the swords, I asked the boys — a captive audience — Percy Jackson trivia questions that I found on the Scholastic site.

1. Who is Annabeth’s mother? Athena, the Goddess of Wisdom.

2. Who is Clarisse’s father? Ares, the God of War.

3. What sort of creature is Mr. Brunner? Centaur, half-horse/ half-human.

4. What sort of creature is Grover? Satyr, half-goat/half-human.

5. Two words: What is the name of Percy’s boarding school? Yancy Academy

7. What type of tree is on top of Half-Blood Hill? Pine tree

9. What sort of animal head hangs above Ares’ cabin? Boar

10. Name one thing that Hermes is the god of. Thieves. Also messenger god.

12. What is the pattern on Mr. D’s shirt? Tiger stripes

13. Where do Percy and his mother like to go on vacation? Montauk on Long Island.

14. Three words: according to Percy’s mom, how did his dad disappear? Lost at sea.

16. What is Dionysus restricted from? He can’t drink wine or any other kind of alcohol for 100 years.

17. What part of the Big House seems mysterious to Percy? Attic

18. What does Percy use to defeat Clarisse when she tries to bully him? Water from the toilets.

19. What lives in the canoe lake? Naiads

20. Aside from pinochle, what is another game Dionysus considers the greatest human achievement? Pac-Man

22. What sort of creature tried to attack young Percy when he was taking a nap in daycare?Snake

23. Who was Zeus’ mother, who hid him from Kronos? Rhea

24. Chiron says there is a statue of what Greek mythological figure in Rockefeller Center?Prometheus

25. Who is the Greek lord of the dead? Hades

Surprisingly, no one seemed to mind the trivia. In fact, they actually liked it. Even the boy who didn’t read the book! I had planned some indoor active games like Medusa Freeze Tag but I shouldn’t have bothered. The boys had their own ideas of how to stay active. All in all, the book club was a success and fun was had by all. I heard that after the boys went home, they continued the duct tape crafts by making shields as well as more weapons. Next time I’ll have cardboard cut out for shields.

My advice for a Percy Jackson book club for little boys is not to get too fancy. The boys were perfectly happy with duct tape, spaghetti and trivia. In fact, they could have used more time for the craft had the aluminum foil held out. Note to self: next time, two rolls of foil!

As for the sword fighting … well, it IS part of the story! And luckily no one got hurt!

The Percy Jackson and the Olympians: Lightning Thief, The Graphic Novel

Click on image of book to view at Amazon or here for Barnes and Noble. Thank you to Here Comes the Girls Blog for featuring this post on The Sunday Showcase!