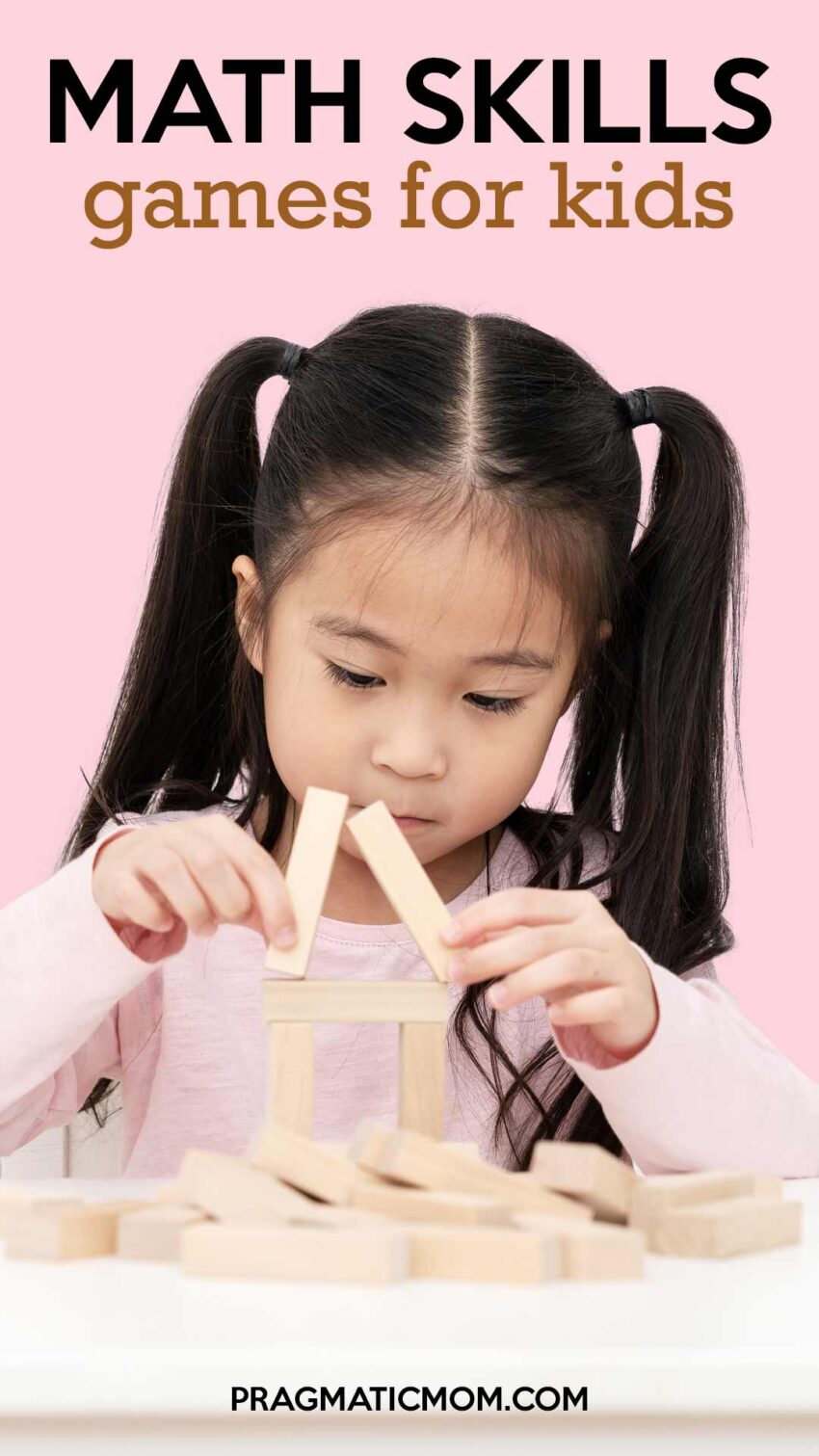 As the school year starts to wind down, I’m longing for summer even though the school year is in full force and quite hectic this time of year. Every summer, I bribe my kids to do some math review so I’m also starting to think about what workbooks to buy. Some moms I know manage to do math review in a fun, gaming kind of way. It makes me think that summer math can and should be fun.

Since this is not my forte, I’m thrilled to introduce Karla Valenti of Tot Thoughts, who created a list of 25 fun and free math skills games to play with kids.

Are you thinking of doing summer math with your kids? What resources and games will you using? Please share. I could use the help!

So, your child struggles with math?

They pay attention, they work hard, they do their homework and yet… those tricky math concepts simply refuse to sink in.

You bring in tutors, you practice flash cards, you spend hours going over worksheets, drilling your child in the car or at the breakfast table.

You tell yourself that if your kid just keeps at it, one day, it’ll “click.” But deep down, you’re worried that they’re falling further and further behind. Your child’s teacher is worried too.

And your child is starting to think they’re not smart. Worse, you’re starting to wonder if that might not be true.

Truth #1: Intelligence is not about math

We have a tendency to think of intelligence as a thing that we all have in varying degrees. We figure out how intelligent our child is by measuring their performance in certain areas (like math) against his peers. We then realize that some children (not necessarily ours) are smarter than others.

It is a mistake to think of intelligence as being a single thing, something we can measure on a spectrum of more or less based on how much we know about something. And it’s hurting your child to think this way.

In 1983, the developmental psychologist Howard Gardner outlined a theory that has virtually revolutionized the way we understand intelligence and our children’s ability to process information.

This theory explains that humans actually have eight intelligences (as opposed to one general intelligence): linguistic, spatial, musical, logical-mathematical, interpersonal, intrapersonal, bodily-kinesthetic, and naturalistic. We all have all eight of these intelligences and we use them to varying degrees, creating an intelligence profile that is unique to us.

So now, when we say a child is good at math, what we really mean is not that they are more intelligent but that they favor their logical-mathematical intelligence. In other words, they prefer to process information when it is presented in a logical and abstract manner; they tend to think critically and are naturally drawn to patterns and categorizations.

In other words the problem isn’t your child, it’s the way they are being taught math.

Truth #2: Improving your child’s math skills is about teaching them to think mathematically.

What your child needs is two things:

The first part is not an easy feat and one that most schools cannot afford as it requires a great deal of customization. However, that doesn’t mean you can’t step in and I have a lot of ideas for you to test out on Tot Thoughts. The second part involves these 25 easy activities your child can do to improve your child’s logical-mathematical intelligence.

These activities are presented in levels of increasing complexity. The levels are in no way related to a child’s age or grade. They simply invite children to start at whatever level they prefer and to continue feeling engaged and motivated as they advance to the more challenging levels (and hey, as an added bonus, many of these activities also help develop your child’s other intelligences).

So there you have them –> 25 easy ways to help your child improve his math skills.

If they seem like fun, that’s because they are designed to be entertaining and yet challenging. That doesn’t mean your child won’t be learning or developing their logical-mathematical intelligence. In fact, what you’ll be doing is instilling in your child a love of learning.

Because let’s face it, deep down, you know your child is intelligent. Now help them realize that too!

Let’s make it easy: pick five activities that you think you’re child will enjoy and give it a try. Karla Valenti writes Tot Thoughts where you can get other tips and ideas on on raising intelligent, creative and empowered tots. Get more on Facebook, Twitter, G+, or Pinterest.