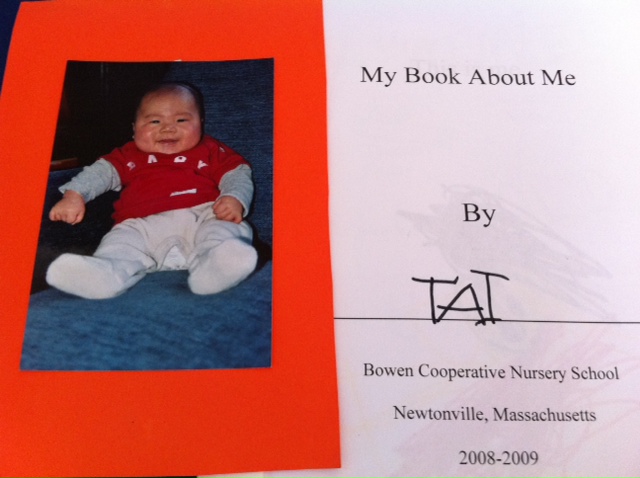 When my son was in preschool, I created this free Kindergarten readiness book for him. I printed it out, bound it into a 3 ring paper folder, and made a copy for each child in his class and the teachers had the kids work on it for a few months before preschool ended. It is both a keepsake book plus, having gone through the ropes with his two older sisters, a Kindergarten readiness book to capture all the academic concepts I thought he needed for Kindergarten:

I included some drawing prompts too:

You can download this FREE printable book: My Book About Me I just love seeing self portraits of my kids. The first thing my kids did in Kindergarten was draw a self-portrait. They also did one every month for that school year. I guess there are specifics that teachers look for that indicate cognitive reasoning and whatnot — the more body parts the better. I just like the art. Days of the Week All About Me Book

Though this book is done over the course of a couple of months, I wanted to capture the day and how my child felt. Preschoolers are so in the moment that I thought it would be fun to look back on this day and see what was going on. The idea for this page was counting to 10. I wanted the number, the word for the number and a physical representation of that number that kids could count out. It was hard to find a dingbat of 10 things that would fit on the page!

My son was learning Spanish so I threw that in too. It was amazing to me when I parent-helped on that day how easily all the kids could count in Spanish. I did not know that my son’s favorite color that day was black! The drawings were unexpected too. I think it’s important for kids to know their upper case alphabet letters before entering Kindergarten but I wanted to work on lower case as well. Lower case is extremely confusing as many letters look the same — b, p, d — for example. The kids drew their favorite animal on the next page. For some reason, my son wanted a bigger space so he used a separate paper that was stapled in. His jaguar looks like a bee, no? I just love that stripey tail. I think he was seriously into Go! Diego Go! at the time and is confusing a tiger with a jaguar. I just love that! While counting to 100 is a skill my kids learned about half way through Kindergarten, some kids are ready for this in preschool. I related it back to their height and the kids had fun being measured.

I put the numbers by 10 in red in case you  wanted to count by 10′s. I also use this to show patterns in numbers. My son would notice how all the numbers end in 9 down the 9 column, for example. He is a mathy kid and sees patterns all around him. But I just wanted to introduce this concept of numbers and skip counting for any child who shows interest. My Favorite Thing to Do in Preschool

We helped kids with spelling or writing if this was an issue but it was great practice to write a sentence. I also just love knowing what made him happy in preschool! When I Grow Up

No preschool keepsake book is complete without future career aspirations! I think they did a space unit in preschool that clearly got the kids really excited! Today, four years later, my son would say he wants to be a chef, video game developer or just live at home with mommy as his career of choice. We may have failure to launch here but at least he will help out with the cooking! 25 thoughts on “Kindergarten Readiness FREE Printable Book: My Book About Me”