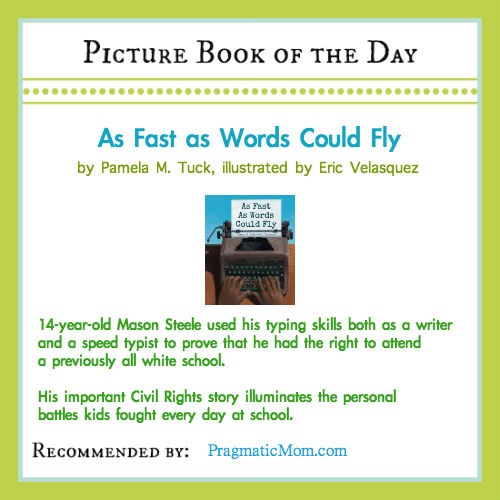 Today, when I searched for a perfect picture book for Picture Book of the Day, a picture book on Civil Rights for kids found me. As Fast as Words Could Fly had been sitting on my pile waiting patiently. A long while. But just yesterday, I had the honor and privilege of bringing Civil Rights Icon, Ruby Bridges, to my elementary school. I was able to spend time with her by driving her to her hotel in Boston after the presentation along with my two girls. My girls noted how elegantly composed she was. It was the way she spoke, they noted. And she was warm, friendly, and down-to-earth. There is something about her presence that, while she is able to go about everyday life unrecognized, makes you sit up straighter and take notice. At least, that was the effect for about 200 kids at our elementary school. Her message was both about to effect change (and it does take a village) as well as a more personal one about giving every person a chance.

It’s apt that her last name is “bridges” because she was the person who crossed a very dangerous bridge allowing others to follow. Ruby is here with two of our teachers. Mrs. H. to the farthest left came up to tell Ruby that because of her work, she was able to attend a previously all-white private school in Brookline. Mrs. H-C to the far right is a teacher who also teaches diversity and acceptance as a core message to kindergarteners. Ruby Bridges fought for integration in New Orleans. The year was 1960 when she was finally allowed to attend an all-white school. In other parts of the country, this very same battle happened over and over again.

While Ruby’s story might be the most well knows as it is told through four books and a Disney movie, there are many more stories of kids who overcame adversity, prejudice, and hatred to attend integrated schools. As Fast as Words Could Fly is the story of author Pamela M. Tuck’s father and the role he played in Greenville, North Carolina.

Ruby Bridges talked about the importance of communication in the fight for civil rights. Letter writing was an important tool to get political leaders to help. Young Mason Steele became the de factor communications arm for his father’s civil rights group, writing letters to politicians and business leaders about the injustices taking place. Words, and the tools of communication — then the typewriter — ended up being powerful tools for Mason.

For both Ruby Bridges and 14-year-old Mason Steele, proponents of segregation used inferiority as one of the reasons why schools could not be integrated. Ruby, along with 136 other rising first graders, had to “pass” an all-day rigged test created to make them fail. She was one of six children who passed. Mason Steele uses his typing skills as a communication vehicle that showed white people that blacks were just as good, if not better, in a high school typing competition.

As Fast as Words Could Fly by Pamela M. Tuck, illustrated by Eric Velasquez

14-year-old Mason Steele used his typing skills both as a writer and a speed typist to prove that he had the right to attend a previously all-white school. His important Civil Rights story showed that kids could make a difference as well as the personal battles they fought every day at school.

For anyone who wants to learn more about Ruby Bridges, including how to bring her as a speaker to your school, the information is here at her site.

Ruby said that she worked really hard on the movie to make sure it was historically accurate and she’s proud of the result. Our third grade watched it in the classroom before her visit. It also makes a great family movie to watch together.

p.s. I have more books for children on The Civil Rights Movement:

Celebrating Martin Luther King Jr. Day with Children’s Books. I have seven books for kids including picture books, YA, non-fiction, and chapter books.

5th Grade Slavery Unit. I cover a little of the history of the Underground Railroad where I live, what life was like during this time, and book lists including picture books and chapter books.