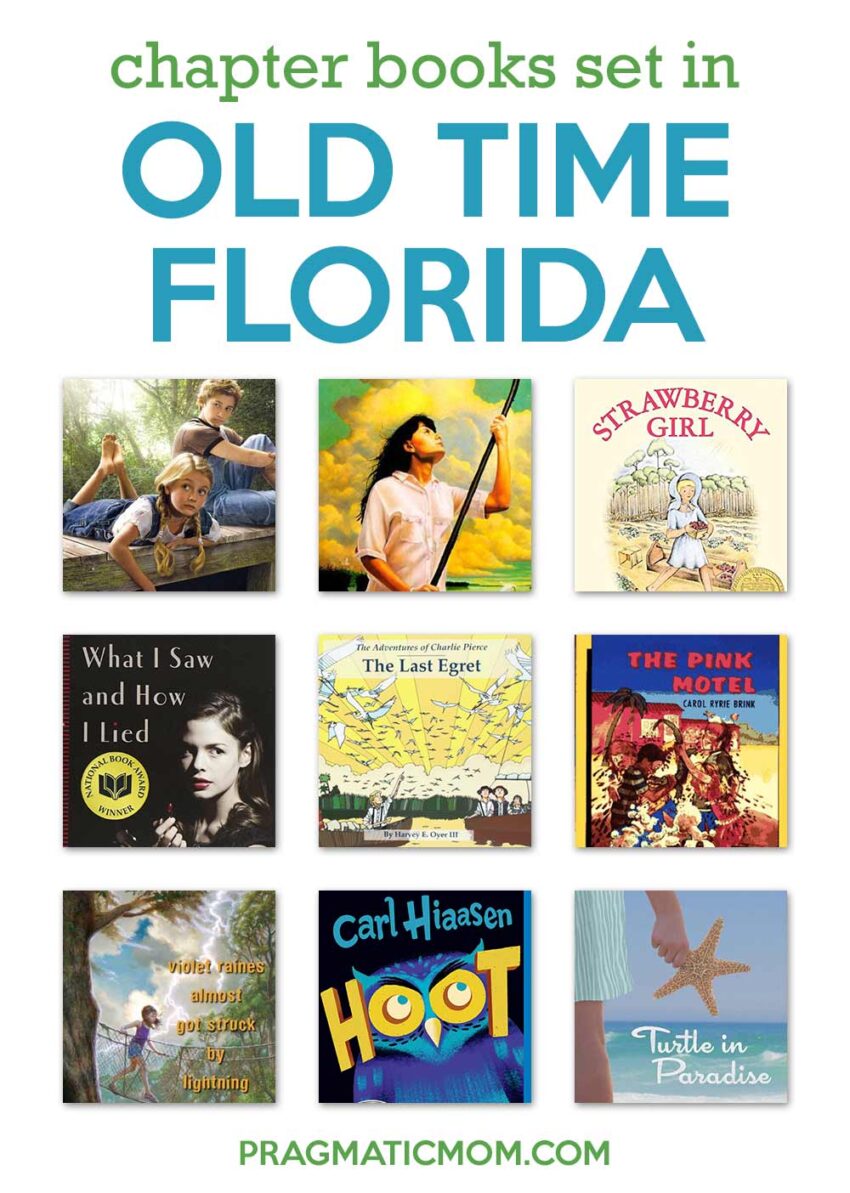 It could just be me but I find that there is something poetic and Old Hollywood-y about Florida’s past. Perhaps it is just the way old Florida is portrayed in children’s books. The setting also seems like a backdoor shortcut to a Newbery award.

From our last trip to Florida in North Captiva Island, we noticed wildlife with big personalities. Perhaps this is the magic that Florida has. If the wild creatures have charisma, imagine the people and the stories they have to tell! Or just read them! These are our picks for best chapter books set in Florida. You don’t have to live in Florida or visit in  Florida to read them, but they might inspire a visit!

What are your favorite children’s books set in Florida, either in the past or in the present day. Please help me build this list! If Because of Winn Dixie were to have an heir, Precious Bones would be the lucky child. I expect this chapter book to do well when the book award shortlists start getting announced. Hollinger weaves a mystery adventure that includes the vernacular of Old Florida Miccosukee Native Americans living uneasily with their white neighbors during the height of Florida “Beach Front” land speculation circa 1949 and 10-year-old Bones is as compelling a girl character as Opal in Winn Dixie. [middle grade, ages 9 and up]

Jean Craighead George of Julie of the Wolves and My Side of the Mountain brings another Native American story set in Florida to life. This time it’s the Seminole Indians told through a young girl, Billie Wind, who is trying to balance the spiritual beliefs of her people with a reality she’s learning about in school that includes nuclear war and pollution. [middle grade, ages 9 and up]

Life in old Florida was never easy. 10-year-old Birdie Boyer works the land growing strawberries with her family but has to fight mother nature in the form of heat, drought, and cold snaps as well as rowdy neighbors who are itching to start a fight. [middle grade, ages 9 and up]

Think Mad Men glamour and ambiance.  Fifteen-year-old Evie’s stepfather returns from WWII and the family heads off to Palm Beach. It is here that layers of secrets and lies are revealed bit by bit.

A young and handsome ex-GI soldier, Peter Coleridge, shows up who catches both Evie and her beautiful mother’s eye. A couple at their hotel, The Graysons, become important friends of her step-father’s but have their own secret they are hiding. And Evie’s step-father has a secret that threatens to destroy them all. Murder, plundered Nazi treasure stolen from European Jews, anti-Jewish prejudice in America, and redemption, are all interwoven into the plot. This is a page-turner that is impossible to put down. [young adult, ages 12 and up]

The true story of Oyer’s ancestor about the near extinction of egrets caused by women’s fashion at the turn of century when hats adorned with feathers were de rigueur. [middle grade, ages 8 and up]

Pair with picture book about how the Audubon Society got started: She’s Wearing a Dead Bird on Her Head.

This great recommendation came from my Twitter friend, @Mowery5, who tweeted, “‏Love FL kids’ books too. One of my favorites as a kid was The Pink Motel. #FLChat ” [middle grade, ages 9 and up]

4. Violet Raines Almost Got Struck by Lightning by Danette Haworth

One of my favorite coming-of-age-girl-characters-about-to-enter-Middle-School is Haworth’s 11-year old Violet Raines. She’s dealing unhappily with the transition from childhood to adolescence, further complicated by friendship issues. There’s a new girl from Detroit who threatens to take over her best friend next door. Her friendship with Eddie is now confusing as her friends start to notice how cute he is. Why can’t things just stay the same? [middle grade, ages 9 and up]

Hoot is set during contemporary Florida but I added it in because Hiaasen is the quintessential Florida children’s book author and pretty much every book he writes is both set in Florida and excellent. Hoot combines contemporary issues including bullying, endangered species, and land development with a twist of “Maniac Magee” magic. It’s a new classic. [middle grade, ages 9 and up]

Set in Key West during the Great Depression when Key West wasn’t a resort town and most of the people were existing on welfare, Turtle in Paradise is Because of Winn Dixie meets the TV show, Little Rascals. 11-year-old Turtle is sent to Key West to live with her relatives while her mother tries to find a father for her. Based on the true story of the author’s grandparents, it captures Key West of yore down to the inclusion of pirate treasure, Papa Hemingway, and swindlers. [middle grade, ages 8 and up]

1. Because of Winn Dixie by Kate DiCamillo

If I could only choose one favorite children’s book, this would be it. I think this is a jewel of a chapter book. Each chapter reads as a character study, yet each chapter builds into a story where the whole is much greater than the sum of its parts. Opal, her father, her rescue dog Winn Dixie, her neighbors, and employer are all characters that mesmerize with flaws that are both realistic and endearing. [middle grade, ages 8 and up]