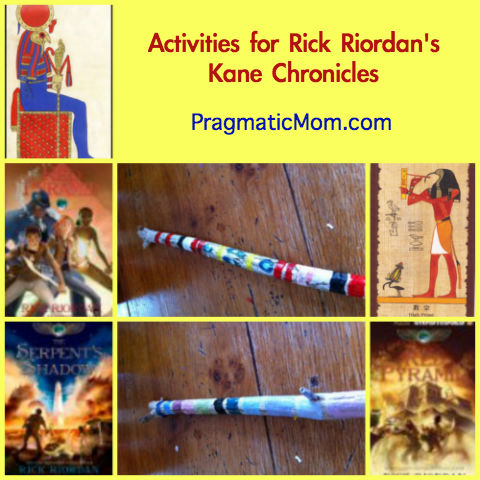 This month the Poppins Book Nook is about Wizards. I looked up the definition to make sure that my book choice was appropriate.

Wizards, Sorcerers and Magicians, Oh My!

1. One who practices magic; a sorcerer or magician.
2. A skilled or clever person: a wizard at math.
3. Archaic A sage.

Ah, a magician is part of the definition. Phew! My son and I have been reading Rick Riordan’s books since the fall. We finally finished the last one this week. It was the third and final book of The Kane Chronicles, The Serpent’s Shadow (The Kane Chronicles, Book Three).

My mom friend Laurie raves about Riordan audio books. They are expensive though. Try your public library. If you have access, a library for the seeing impaired will also have it.
Sadie Kane and her brother Carter discover that they are godlings, descendants of the ancient Egyptian Pharaohs with the ability to channel the power of the ancient gods. Sadie is tied to Isis, the goddess of magic. Carter has affinity for Horus, god of the Pharaoh. That’s the good news. The bad news is that:

Ancient Egyptian Gods: Which One Are You?

The three chapter books are not as popular as Riordan’s Percy Jackson series but we enjoyed them just as much. It could be that Ancient Egyptian mythology is not as well known as Greek or Roman so it’s more challenging for kids to follow. Rick Riordan has a helpful guide to the Egyptian gods. The god of the sun, Ra was the first pharaoh of the world, back in the days when gods inhabited Egypt. From Rick Riordan’s website.

My son and I enjoyed comparing them to the Greek gods, but I found a game where you can discover which Egyptian god you are from QuizFarm.

Here are some of the questions:

Answer the 33 questions to discover your inner Egyptian god. Perhaps you are a godling too!

I scored as Thoth who is the God of knowledge, hieroglyphs, and wisdom.

Image of Thoth from Rocket to Luna

Thoth is the god of wisdom, letters, the recording of time, science, magic, the scribe at the divine court. He is depicted as ibis-headed, often carrying a scribes pallet or a papyrus. He is said to be self- created before creation, the one who gave Ptah the Word that caused everything to come into being. He is also seen as a moon- god, possibly because he won the five sacred days of the year from the moon-god Khonshu in a game of draughts. Your Symbols: ibis, baboon, writing palette and reed pens.

Craft for The Kane Chronicles: Paint a Stick to Make Your Own Magic Wand or Staff

In the Kane Chronicles series, magicians have a lot of paraphernalia to cast spells. They use clay and wax to make figurines. They have staffs, wands, crooks, and flails. And there are all different types of magic from healing magic to earth magic to chaos magic.

With all the Riordan books, my son and I were left feeling like 1) we could be half-god or house a god, 2) we might have undiscovered magical powers, and 3) we just need some training to find out.

Make your own wand or staff and maybe you will discover magical powers within you! We are still working on polishing ours.

Painted Sticks from Anne With an E. Aren’t hers gorgeous?