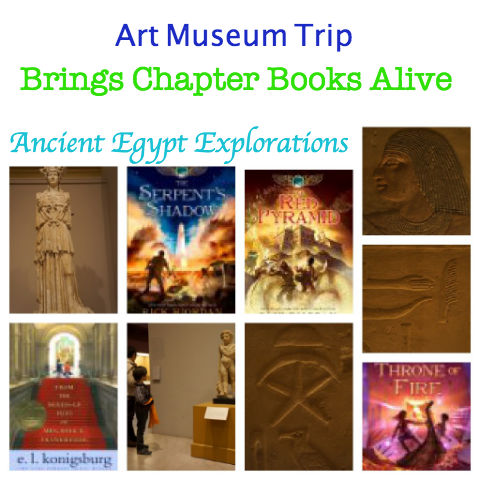 My mom friend Loren from Felix Doolittle Fine Stationery sent me these photos with this note about a trip to Boston’s Museum of Fine Arts with her 9-year-old son who had just finished reading The Kane Chronicles series by Rick Riordan. Ancient Egypt and action adventure had suddenly made museums desirable!

Julian also read From the Mixed Up Files of Mrs. Basil E. Frankweiler by E. L. Konigsburg, a personal favorite of mine, but an award winning book that I haven’t yet been able to convince my own kids to read.

She says, “On MLK Day, Felix, Julian, and I went to the Museum of Fine Arts, Boston (MFA).  It’s not often that I can convince Julian that a day at the museum is a good idea, but he was just as excited as I was. Could this statue be similar to the mysterious one in From the Mixed Up Files of Mrs. Basil E. Frankweiler?

The reason:  he wanted to see representations of characters he’s recently read about. His game plan was to see the Egyptian rooms and the Italian Renaissance.” For anyone who hasn’t read From the Mixed Up Files of Mrs. Basil E. Frankweiler, it won a Newbery award. The story takes place mostly at the Metropolitan Museum of Art in NYC when a sister and brother run away for adventure and end up living there for several weeks. My oldest tried to read the book in fifth grade but got confused by the perspective of the book; Mrs. Basil E. Frankweiler is narrating  the story of the two runaways who end up connected to her through both her attorney and a mysterious piece of art at the museum.

When suburban Claudia Kincaid decides to run away, she knows she doesn’t just want to run from somewhere she wants to run to somewhere–to a place that is comfortable, beautiful, and preferably elegant. She chooses the Metropolitan Museum of Art in New York City. Knowing that her younger brother, Jamie, has money and thus can help her with the serious cash flow problem she invites him along.

Once settled into the museum, Claudia and Jamie, find themselves caught up in the mystery of an angel statue that the museum purchased at an auction for a bargain price of $250. The statue is possibly an early work of the Renaissance master Michelangelo, and therefore worth millions. Is it? Or isn’t it? Claudia is determined to find out. This quest leads Claudia to Mrs. Basil E. Frankweiler, the remarkable old woman who sold the statue and to some equally remarkable discoveries about herself. Loren continues, “Those rooms totally came alive for him (and us) as never before since he could recognize a number of the hieroglyphics and he knew some of the stories of the pantheon of Egyptian gods. He looked at every tiny little sculpture and of course the big ones too.” Loren brings up a wonderful point! An excursion to a museum can bring a book alive igniting both an interest in ancient civilizations and art!

While I love Rick Riordan’s Kane Chronicles series, I do find that the plethora of ancient Egyptian gods confusing as they are not as familiar to me as Ancient Greek or Roman gods. Also, Riordan covers a wide swath of Egyptian history which can be overwhelming.

How about you? What outings help make books come alive for you and your kids?

Is there a pairing of book to museum that you’d recommend (even if we don’t live in your city?). Thanks for sharing!

I also like The Pharoah’s Secret as a standalone Ancient-Egypt-meets modern-day-kids-with-powers-unbeknownst-to-them. It’s very similar to the Kane Chronicles but focuses on a brief moment in history, specifically the mystery of the rare female Pharaoh, Hatshepsut.

The Egypt Game also won a Newbery honor. It’s a modern-day story of kids who discover  a love of Ancient Egypt with a murder mystery twist.

I found this Ancient Egyptian mythology book helpful in keeping track of all the gods and goddesses. It’s compact size and easy to read text makes it a winner for kids too! A great companion book to these Ancient Egypt chapter books!

Click on image of any book to view more closely at Amazon, or here for Barnes and Noble.