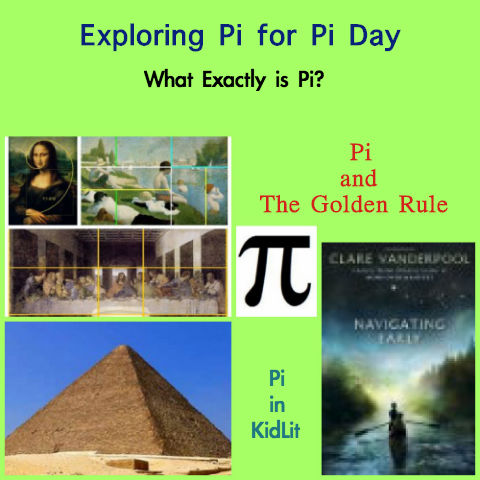 I wanted to celebrate Pi day by showing the relationship of math to the world around us including circles, pyramids, and great works of art! p.s. I have a post on the math of spirals if you want more math in nature.

Pi is a name given to the ratio of the circumference of a circle to the diameter. That means, for any circle, you can divide the circumference (the distance around the circle) by the diameter and always get exactly the same number. It doesn’t matter how big or small the circle is, Pi remains the same. Pi is often written using the symbol

and is pronounced “pie”, just like the dessert. from Math.com

Another way to think of Pi. You can measure Pi by constructing a physical wheel and rolling it out.

Pi and Phi in The Great Pyramid of Egypt There is compelling evidence that the design of the pyramid embodied these foundations of mathematics and geometry:

Image and information from The Golden Number.

And it turns out that Phi (Φ) and pi (Π) and Fibonacci numbers can be related in several ways!

Artchoo! shows the connection between Phi and art with her post on the Golden Ratio for Kids:

Many artists have subsequently taken this idea and used it to plan their painting compositions. Leonardo DaVinci was probably the most famous artist to use the Golden Ratio in his paintings. Georges Seurat also used it. Check out the Mona Lisa, Bathers at Asnieres, and the Last Supper. from Artchoo! Clare Vanderpool’s Navigating Early is the perfect chapter book for kids to celebrate Pi day. Here’s why from 100 Scope Notes:

It’s 1945 and Jack Baker is not in Kansas anymore. He’s in Maine, sent to boarding school after the death of his mother. It’s an adjustment. Things are different, but nothing is as different as Early Auden, an outcast savant obsessed with his brother, thought killed in WWII, and the number pi. He sees an elaborate story of Pi in the endless chain of digits. When Early sets out on a quest to find Pi by tracking a legendary black bear on the Appalachian Trail, Jack joins him. Their quest brings them into contact with a cast of memorable characters and unexpected, sometimes threatening situations, Early’s story of Pi begins to reflect reality. We soon realize that Early and Jack are each searching for something. While not exactly what they bargained for, both find what they seek. from 100 Scope Notes

Clare won the Newbery Award for her first novel, Moon Over Manifest, and her second book does not disappoint!

Click on image to view at Amazon or here for Barnes and Noble.