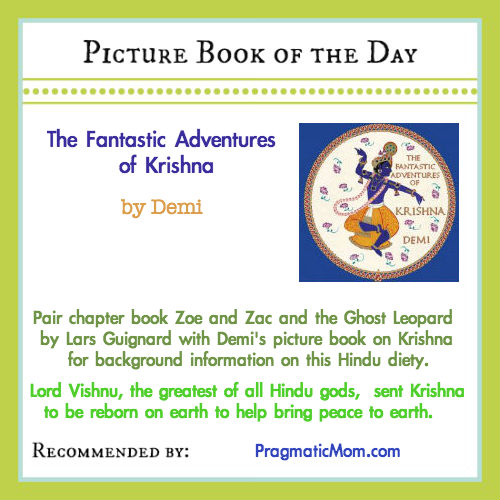 The great Hindu god Vishnu, greatest of all gods, promises to help bring peace to earth when evil demon kings try to kill all the good rulers of earth. He will be reborn on earth as a child named Krisha. Does this story sound vaguely familiar?! We notice a rebirth theme in World Religions!

The Fantastic Adventures of Krishna by Demi tells the story of Krishna, rescued from certain death to be raised by two cowherds. The evil demon king Kasma not deterred, sending demon after demon to destroy Krishna, to no avail. Krishna prevails in the end, destroying Kasma and wandering the earth teaching people how to live together in peace and joy. Demi, as usual, makes this story easy to read with her gorgeous colorful illustrations.

We are trying to learn more about World Religions through picture books at my house since we don’t attend church and I personally know very little about the Hindu religion. My only reference point to Krishna were the Hare Krishnas I’d seen at airports (pre-9/11 security) which always made me feel uneasy.

It was with great delight that action adventure Zoe and Zac and the Ghost Leopard by Lars Guignard landed in my lap. Think Percy Jackson or Kane Chronicles Goes to India and you get the gist!

Like a Rick Riordan action adventure series, this chapter book for ages 9 and up has the requisite elements to draw kids in:

I definitely want more Zoe and Zac and wait expectantly for the next installment. Riordan takes us from Greek to Roman to Egyptian ancient gods. It’s just a small leap to travel to India next! Author Lars Guignard went to high school in the Indian Himalayas and he really gives a sense of place as Zoe and Zac traverse through India both in crowded chaos of cities and more tranquil wooded rural areas.

The lines blur between religion and mythology as they should — isn’t mythology just ancient religious beliefs? — and what remains is the probably the most exciting world religion/mythology home study unit ever! I’d use the Demi picture book after reading Zoe and Zac, just as a quick aside to explain the story of Kirshna who makes an appearance in the chapter book.