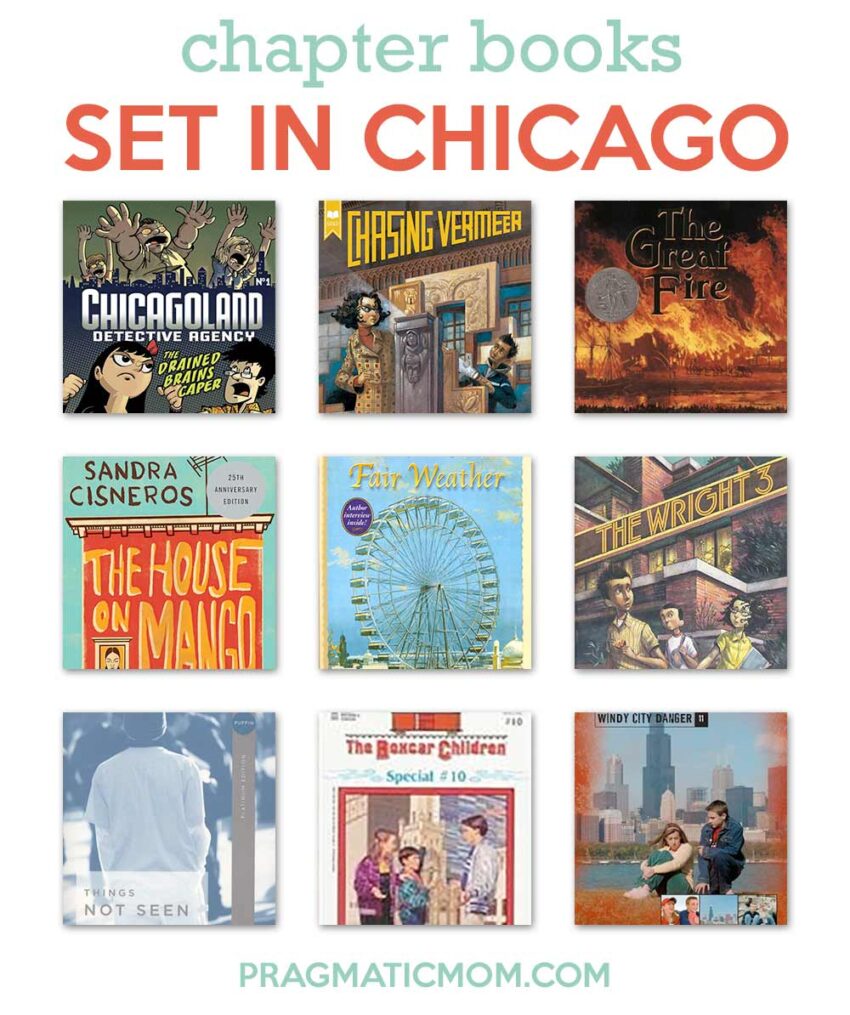 I love researching very specific book requests for kids! I received this request from Nadine:

Hey! I have been searching for books with an “inner city” vibe. My son is 9 and read The Spray-Paint Mystery and The Case of the Missing Trophy by Angela Medearis. Both times he was able to relate parts of the books to “Chicago Stuff.”

He made mention of the different names (we spend a lot of time visiting family in Chicago). I am trying to find books in the 4th-6th grade level with urban/inner city references. I am not coming up with anything in my search and I t

hought of you! Maybe a possible “Book List” inspiration in the future?
Thanks in advance …
Nadine C-S

For this challenge, I needed a Chi-Town partner in crime so I called upon my blogging friend, who resides in Chicago and blogs at CraftWhack and Artchoo! She came up with …

Raf knows Megan is trouble from the moment she steps into his mom’s pet food store asking for a tarantula. But there’s one thing you can count on in Chicagoland: weird things happen several times a day. Megan is a vegetarian, manga-reading haiku writer. She definitely doesn’t fit in at Stepford Academy, her new summer school. The other students are happy to be in class. Too happy. And everyone looks and acts exactly alike. That’s weird. Megan is determined to dig into Stepford’s secrets, but soon she’s in way too deep. Raf may be the only human being she knows who can help. But with zombified students, very mad scientists, and the school psychiatrist on their trail, they’re going to need a whole lot more help. We did say that Chicagoland is weird…

This bewitching first novel is a puzzle, wrapped in a mystery, disguised as an adventure, and delivered as a work of art.

When a book of unexplainable occurrences brings Petra and Calder together, strange things start to happen: Seemingly unrelated events connect; an eccentric old woman seeks their company; an invaluable Vermeer painting disappears. Before they know it, the two find themselves at the center of an international art scandal, where no one is spared from suspicion. As Petra and Calder are drawn clue by clue into a mysterious labyrinth, they must draw on their powers of intuition, their problem-solving skills, and their knowledge of Vermeer. Can they decipher a crime that has stumped even the FBI?

I personally liked Chasing Vermeer myself but my oldest, at around age 9, did not which surprised me because she is arty. It’s a mystery and set more in suburban ChicagoLand than inner city.

The Great Fire by Jim Murphy

“Vivid firsthand descriptions by persons who lived through the 1871 Chicago fire are woven into a gripping account… Absorbing and riveting reading.”

And a Newbery Honor book!

The House on Mango Street by Sandra Cisneros

Jeanette says, “Good for maybe 7-8th grade and up.”

I searched online as well. I came up with a few more — it’s tougher than we’d thought!!!

Things Not Seen by Andrew Clements

A teenage boy living in Hyde Park wakes up and discovers that he is invisible. His parents are questioned by police because someone reports that he hasn’t been seen, and a new friend helps him uncover why he’s become invisible. Recommended for ages 9 and up.

The “Boxcar Children” travel to Chicago for a wedding and wind up investigating a mystery.

Bryce and Ashley Timberline are normal 13-year-old twins, except for one thing—they discover action-packed mystery wherever they go. Whether it’s tracking down a missing groom or uncovering a drug-dealing ring, Bryce and Ashley never lose their taste for adventure. Wanting to get to the bottom of any mystery, these twins find themselves on a nonstop search for the truth.

The Wright 3 by Blue Balliett

I found another book by Blue Balliett of Chasing Vermeer set in Chicago based on Frank Lloyd Wright’s Robie House in Hyde Park. Ok,

I happen to love Richard Peck and Fair Weather is one of my favorites! It fits the bill since no one said that we couldn’t go back in time! Fair Weather is set at the turn of the century when Chicago hosted the World Fair. Honestly, this is a great read! Two of his other books are also wonderful but they are set in rural Illinois during the Great Depression.

The latest in the Adventures in America series brings home some of the hard truths about life during the Depression through a riding-the-rails tale. Harry James Harmony is almost an orphan: his mother is desperately ill with tuberculosis, and his father has gone to Chicago to find work as a jazz musician. Harry leaves the foster farm and stows away on the train from Bridgeport, Connecticut, to Chicago, dreaming of a reunion with his father. He is pursued by the railroad police and tormented by his fear that he’ll be sent to an orphanage or reform school if caught. Wolfert serves up a great deal of information about the Depression in this page-turner by focusing on trains and the people who were forced to ride them.

CHICAGO, 1886. Twelve-year-old Dinah Bell is too young to be working twelve-hour days. But to the factory and mill owners, age doesn’t matter. In fact, nothing seems to matter to them except how much work gets done. But Dinah and workers like her have many concerns: Food is scarce, wages are small, and hope seems out of reach.

Dinah’s father knows there must be a better way — that’s why he and eight thousand others are planning to march for an eight-hour day. But when her father is taken prisoner for helping to plan the march, Dinah is desperate to rescue him. As the march gives way to a terrifying riot, Dinah faces constant danger and a persistent question: What will become of her family if she does not set her father free?

America is her Name by Luis Rodriguez

Set in the Pilsen barrio of Chicago, this children’s picture book gives a heartwarming message of hope. The heroine, América, is a primary school student who is unhappy in school until a poet visits the class and inspires the students to express themselves creatively in Spanish or English. América Is Her Name emphasizes the power of individual creativity in overcoming a difficult environment and establishing self-worth and identity through the young girl América’s desire and determination to be a writer. This story deals realistically with the problems in urban neighborhoods and has an upbeat theme: you can succeed in spite of the odds against you. Carlos Vázquez’s inspired four-color illustrations give a vivid sense of the barrio, as well as the beauty and strength of the young girl América.

The In-Between by Rebecca Ansari

“Cooper is angry that his father has left him, his sister Jess, and his overworked mother in a run down neighborhood in Chicago and is now in California with his new wife and son. The rage spills into other areas of his life– he has trouble getting along with his friends because their families are intact, and he is especially angry with the quiet, uncommunicative girl, Elena,  in the newly renovated house next door. He managed to be kind to his sister, and to help her manage her diabetes, but he is somewhat relieved when a new boy at school, Gus, befriends him. Gus is having trouble fitting in, having been sent to live with his irascible grandmother while his parents are divorcing. The two boys bond over this, and also over one very odd fact. Cooper, Jess, and Gus can see Elena’s house differently than everyone else. To them, it is decrepit and abandoned. When Jess is obsessed with an old train accident, and an unidentified boy who died, Cooper and Jess realize that Elena’s school sweater has the same crest on it and start to investigate. what her connection might be. They eventually find that Elena and her sister were killed many years ago, but never died, and seem to travel from tragedy to tragedy, living in “the in-between”. Because the three children can see Elena and the true state of her house, they worry that they are next in line for the tragedy they suspect that Elena will precipitate. Will they be able to find out what Elena’s true purpose is, and to save themselves?” [middle grade, ages 9 and up]

Thank you to Becky of Kid World Citizen for this great chapter book series via her Facebook page.

Fans of magic, mystery, and adventure will love the first exciting Sixty-Eight Rooms Adventure—the perfect next step for kids who loved the Magic Tree House series, and readers who love Chasing Vermeer, The Mixed-Up Files of Mrs. Basil E. Frankweiler, and Wonderstruck! Almost everybody who has grown up in Chicago knows about the Thorne Rooms. Housed in the deep inside the Chicago Art Institute they are a collection of 68 exquisitely crafted miniature rooms. Each room is set in a different historic period, and every detail is perfect. Some might even say, the rooms are magic. Imagine—what if on a field trip, you discovered a key that allowed you to shrink so that you could sneak inside and explore the rooms’ secrets? What if you discovered that others had done so before you? And that someone had left something important behind?

Erica of What Do We Do All Day also writes for Storied Cities, a blog that showcases books for kids set in urban settings. She has several books on Chi-Town here:

The Mystery of Pi for Pi Day!

To view any book at Amazon, please click on image of book.

21 thoughts on “Chapter Books for Boys Set in Chicago”