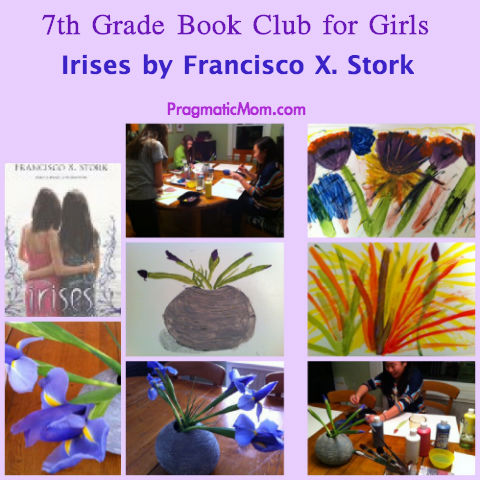 
It was with great difficulty that I managed to schedule a book club for my 7th grader, Grasshopper and Sensei, and there are only four girls in her book club! Yes, they are so busy these days!

I have to confess that I’ve been so busy that this is the first book club I’ve hosted where I didn’t pick the book or even read it! My daughter discovered it at school and thought everyone would like it. She assured me that an “easy” book club would be fine and to stop stressing. Her friend Isabelle arrived at 6:45 pm after dance. Jane’s family had forgotten so she arrived shortly after that. And somehow Rachel’s parents missed the memo.

Like the sisters in Irises, these three girls have also been going through lots of change. Jane has recently returned after spending four years in Munich. Though she is at the same middle school as my daughter, they are in different groups so they never see each other. Not at lunch. Nor even on the school bus. Isabelle switched to a private school last year, so they don’t see her either. Between five days of dance and her upcoming Bat Mitzvah, she’s very busy. So, this book club was a chance for them to slow down and reconnect. After a quick dinner — pizza or pasta delivered — they settled into their book club project. I had bought some irises for them to paint. The florist assured me that the blooms would open if I put them in warm water for a few hours, but still they were tight little buds. Jane, another artist, took time to carefully sketch out her painting. I provided tag board and tempera paint, primary colors with white and black so they had to mix paint to get purples, greens and browns. Isabelle noted that the book was unusual in that most books build to a crescendo whereas this book started that way and worked its way down. In some ways, their lives have paralleled this dynamic. 6th grade was a seismic change but 7th grade has been gliding along. The girls are figuring out both who they are and what they can be. Isabelle wanted a reprieve from art critiquing as she claims no artistic talent. I disagree! Jane’s careful sketching paid off. Her rendition is beautifully realistic. Grasshopper and Sensei has one realistic bud and then a burst of colorful exuberance. Like the girls, each painting is unique but with a common thread. The evening too was filled with, “Do you remember when …?” followed by lots of laughter. The girls had all been in the same class in first grade when their book club started. Now 6 years later, they spend the evening reminiscing and reconnection, building on that common thread that binds them.

The sisters in Irises, too, had to redefine who they are and their relationship to each other as seismic changes rocked their world. Their mother was in a catatonic state after a car accident put her in a coma two years ago. Their father dropped dead in chapter one (not really a spoiler since it’s chapter one, right?).

Still in high school, Kate thinks she has to choose between Stanford and her family. Younger sister Mary, a gifted artist, has lost her passion for art. Three men also complicate matters. Kate’s boyfriend Simon is an easy solution but easy is never the right answer. Andy challenges Kate into thinking in new directions but will that mean losing what is left of her family? And Marcos is a bad boy who good girl Mary is drawn too.

As for drawing (and painting too), I’d recommend buying the irises three days before you want them in full bloom. Here they are on day 2: And like the sisters in Irises and the 7th grade girls in the book club, each bloom is recognizably an iris but very, very different. It was a lovely evening of respite for these busy middle school girls. Like the irises in the vase, may they each bloom to their full unique potential. But I will always think of them as those little buds!

p.s. If you would rather paint irises in a natural setting, I happend upon these last spring near a soccer field. The reminded me of Van Gogh’s famous work. To view the book at Amazon, click on the image of the book or go here for Barnes and Noble.