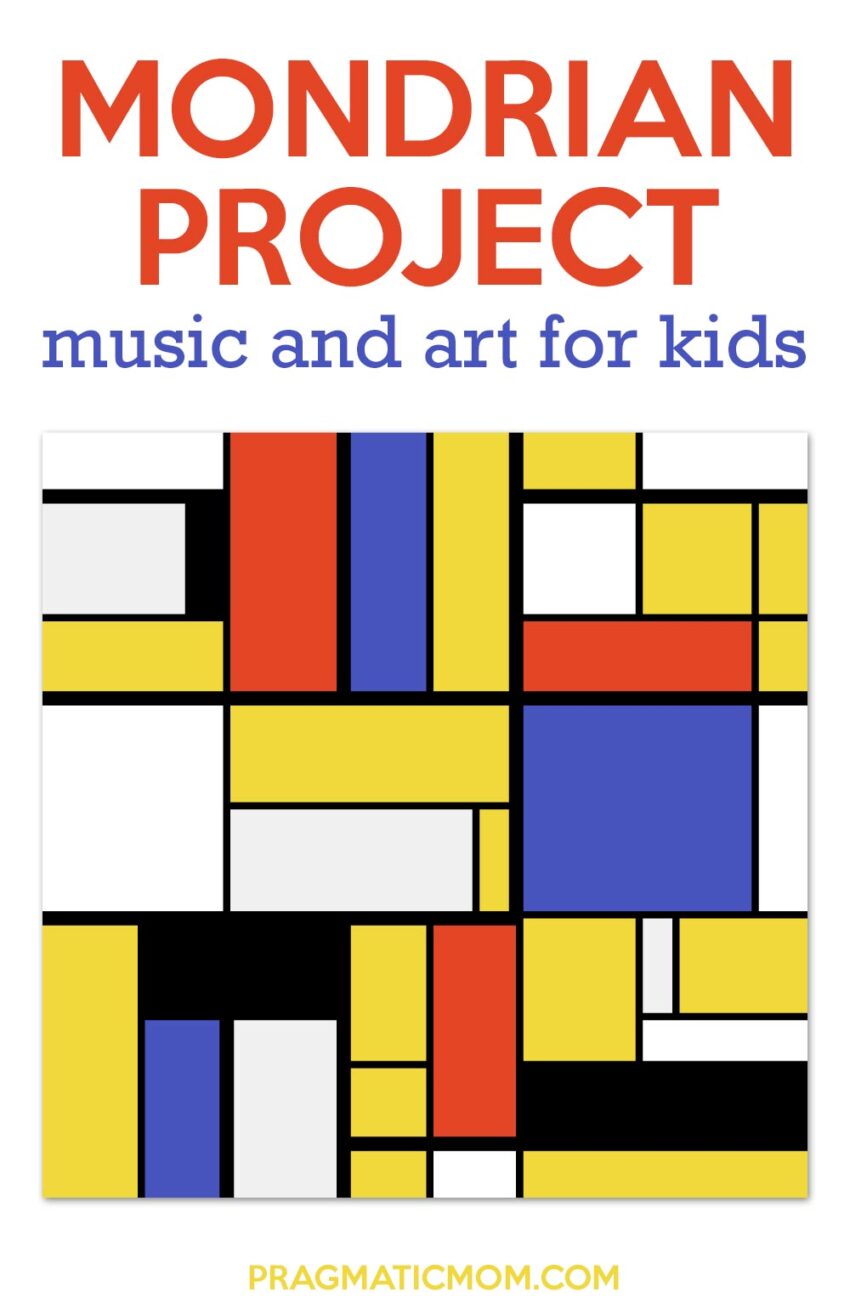 I didn’t realize how much Piet Mondrian was influenced by the music of his day, jazzy blues called Boogie Woogie. I was more familiar with his simple geometrical shapes and primary colors (blue, red, yellow) that he used to express reality, nature, and logic. This piece, the Boogie Woogie, takes the beat of jazz and turns it into a geometric design.

Mondrian, who had escaped to New York from Europe after the outbreak of World War II, delighted in the city’s architecture. He was also fascinated by American jazz, particularly boogie-woogie, finding its syncopated beat, irreverent approach to melody, and improvisational aesthetic akin to what he called, in his own work, the “destruction of natural appearance; and construction through continuous opposition of pure means—dynamic rhythm.” In this painting, his penultimate, Mondrian replaced the black grid that had long governed his canvases with predominantly yellow lines that intersect at points marked by squares of blue and red. These atomized bands of stuttering chromatic pulses, interrupted by light gray, create paths across the canvas suggesting the city’s grid, the movement of traffic, and blinking electric lights, as well as the rhythms of jazz. from MOMA Here’s another video on Boogie Woogie music from Smithsonian.com.

Mondrian influenced many other artists of his time including American Charmian von Wiegand. Charmian von Wiegand. American. 1899 – 1983. She was a good friend of Piet Mondrian and his geometric paintings strongly influenced her work.

What Are Components of Mondrian’s Work?

Pattern: a decorative design.
Primary Color: a color, such as red, yellow, or blue, that yields other colors when mixed.
Quadrilateral: a plane figure having four sides and four angles.

Boogie Woogie music: an African American style of piano-based blues that became popular in the late 1930s and early 1940s, but originated much earlier, and was extended from piano, to three pianos at once, guitar, big band, and country and western music, and even gospel. While the blues traditionally depicts a variety of emotions, boogie-woogie is mainly associated with dancing.

Art (and Music) Project for Kids

These lovely examples are from my kids’ elementary school! Books on Mondrian for Kids to Explore

Primary colors blue and yell0w are best friends. What happens when they hug? This simple picture book was inspired by Mondrian’s work.

The Burglar Who Painted Like Mondrian by Lawrence Block

Bernie Rhodenbarr must solve a Who Dunnit mystery or be framed for the murder of his client. He will need to learn about Mondrian to solve this case!

Great book review by The Fourth Musketeer on Piet Mondrian’s life and recently translated from Dutch.

Mr. Orange, as adults might guess who see the American cover (the Dutch cover looks completely different, as is often the case), is none other than the famous Dutch artist Piet Mondrian, who has moved to New York to escape the repressive political environment in Europe.  With Linus’ older brother off at the war, Linus inherits his grocery delivery route, and, unable to remember his customer’s foreign name, dubs him Mr. Orange because of his twice-monthly delivery of a box of oranges.  The two strike up an unusual friendship, as Mr. Orange shares with Linus his unusual perspective on life.  We learn, for example, how he attempted to capture in his work the raw energy of both boogie-woogie music and New York. from The Fourth Musketeer

25 thoughts on “Mondrian Music and Art Project for Kids”