PickyKidPix and I attended an Understanding Our Differences author visit featuring R. J. Palacio of Wonder.

We learned a few things:

I was so impressed with the kids who attended the sold-out author event. The questions were coming in a never-ending stream — as written questions but also several lines of kids waiting their turn for the mike.

The questions were so insightful too. An author’s dream audience, I would imagine. They were so interested in every word she had to say. So empathetic for the characters. So engaged! We actually ran out of time for questions and not a single adult asked a question — there was no way we’d deprive the kids of their questions. These were some of the questions that I remembered and I’ve paraphrased the answers as best I could. Q: What was the name of the ice cream shop?

Q: Is Justin an older Auggie?

A: YES! He’s also the only outsider that can give us a perspective on Auggie and his family. The book pivots around this character. He’s a minor character who plays a significant role. He’s the outsider point of view. Q: Why did you end the book on a happy note?

A: Because as the author, I get to choose the ending.

Q: What was your favorite part of the book?

A: The scene after they flee the woods, and Auggie is brave enough to hold his hand up for a high-five he’s not sure he will receive. Q: Is Jack’s experience at the ice cream shop what happened to you?

A: Yes. I was waiting outside with my toddler in his stroller facing me. I worried that he was going to turn around and cry or make a scene when he saw a little girl with a severe facial deformity. I was scared for her so I wanted to move him away quietly without anyone noticing. Unfortunately, it didn’t turn out that way. When my son came out of the ice cream shop holding three chocolate milkshakes, I tugged on his arm too hard in my haste to leave. He ended up dropping all three milkshakes and we rushed off. During all this commotion, the little girl’s mother said calming to her kids, “Come on girls, it’s time to leave.” I felt terrible that I might have made that little girl feel bad. That night, I couldn’t stop thinking about that incident and how I could have, should have, handled it better. I wrote the first sentence of Wonder on a post-it note. Q: Will you write a sequel?

A: Probably not. It feels like the story is complete. Q: Will Wonder become a movie?

A: Maybe. It’s in development now but the sticky point will be who will be cast in the role of Auggie. I am adamant that it should NOT be an actor who is made up to look like he has a facial deformity. I would want a child to be cast in this role who has this condition and that will be a tough sell in Hollywood. (She gave details of this condition but I’m afraid that I can’t remember the specific name for it.) I was thrilled to meet R, J. Palacio!

Wonder is on my List for Potential Newbery Award

I have Wonder as a potential 2013 Newbery Honor book. I don’t think it will win the award straight out but I’m hoping for an honor. It’s getting a lot of buzz. Fingers crossed!!

After being homeschooled all his life, 10-year-old August “Auggie” Pullman is starting 5th grade at a private middle school in his Upper East Side neighborhood. He wonders if anyone will realize that he’s just a normal kid underneath his severely disfigured face, an affliction he was born with. His middle school classmates are challenged to “be kinder than is necessary” but can they? Will they? In this uplifting story, it turns out that everyone carries some kind of disfigurement that feels isolating, even though most can’t be seen. Readers will cheer for Auggie as he experiences acts of kindness that do indeed change his world. I’d hand this book to boys or girls in grades 4th-6th, particularly for those with special needs classmates. Activity: Hold a mirror up and try to write your name backwards on the paper. This activity is from Understanding Our Differences and mirrors what it’s like to have Dyslexia.

Examine at Amazon by clicking on book. 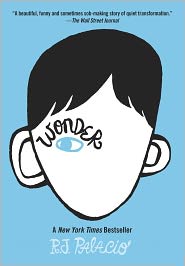 Examine from Barnes and Noble by clicking this image.

To examine any book at Amazon, click on image. As an Amazon Associate, I earn from qualifying purchases.