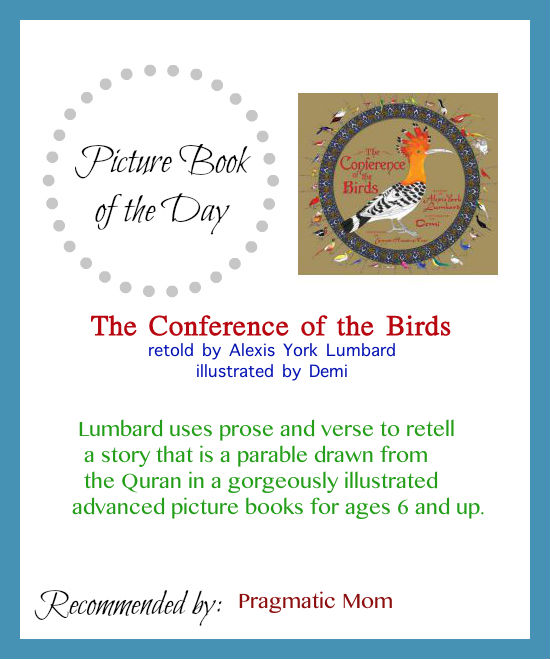 We don’t go to church so we are studying world religions using picture books.  Demi has several wonderful picture books on this topic so when I was offered a book that she illustrated, I jumped at the chance. And then, by coincidence, Alexis York Lumbard’s husband emailed me. It’s such a small world but we live in the same town! Kismet? Karma? Fate? Who knows!

How do you expose your children to world religions? Please share! The Conference of the Birds retold by Alexis York Lumbard, illustrated by Demi

Lumbard uses prose and verse to retell a story that is a parable drawn from the Quran in a gorgeously illustrated advanced picture books for ages 6 and up. Birds are a symbol of spiritual journeying and in this story, they are seeking a wise and loving king. Each bird in the group must overcome some kind of obstacle:  fear, attachment, laziness, hardship, and arrogance. The best part of the book is the surprise ending.

The Empty Pot by Demi

This is one of my all time favorite picture books. I have a post here with activity for a book club for kids or a Chinese New Year party.

One World, Many Religions: The Ways We Worship by Mary Pope Osborne

Mary Pope Osborne might be better known for her Magic Tree House early chapter book series but she was a World Religions major in college. We’ve been enjoying the short overviews of 7 major religions in this advanced picture book. It’s a wonderful overview covering Judaism, Christianity, Islam, Hinduism, Buddhism, Confucianism and Taoism.

Thank you to Joseph Lumbard for another great book recommendation.  The Wisdom of the Bird: A Tale of Solomon and Sheba by Sheldon Oberman. It combines several Near East legends into a single story of the hoopoe bird. Extremely well-done and a very nice accompaniment to Conference of the Birds.

He also says there is a show based on The Conference of the Birds: “The original inspiration is from the Quranic story of Solomon and the hoopoe, probably from other Near Eastern legends of the hoopoe as well. The idea of an allegory of the birds was then developed in Islamic Philosophy (Ibn Sina) and Sufism (Ahmad al-Ghazali), then Attar took Ahmad al-Ghazali’s 5-6 page allegory and fleshed it out.”

Click on image of book to view at Amazon, or here at Barnes and Noble.

18 thoughts on “Picture Book of the Day: The Conference of the Birds”