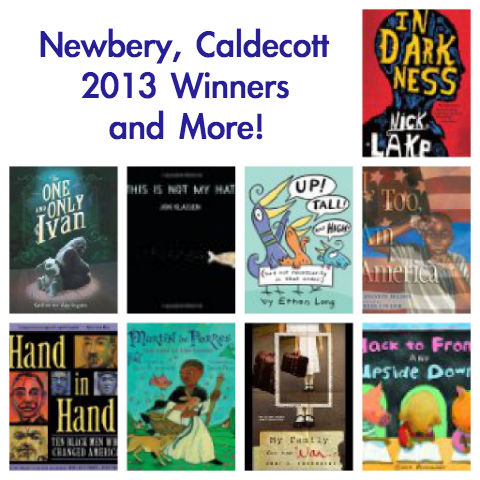 Newbery, Caldecott and Printz Winners of 2013

p.p.s. If you are upset — What? Wonder didn’t win anything?!! — that a book you love didn’t win, Nerdy Book Club has a great post on Top 10 Things You May Not Know about the Newbery Award by Monica Edinger. Read it if you are upset. It is guaranteed to make you feel better!

The One and Only Ivan by Katherine A. Applegate

This Is Not My Hat illustrated and written by Jon Klassen

Review by The Book Chook:

For me, this charming children’s picture book is a stand-out because of the sheer fun and quality of the illustrations. Klassen uses muted colours in a limited palette to show us a story that takes place underwater. Each time I look at the calm serenity of the very big fish wearing a tiny blue hat I just have to grin, and kids most definitely will too.

One Cool Friend by Toni Buzzeo, illustrated by David Small

Sleep Like a Tiger by Mary Logue, illustrated by Pamela Zagarenski

In Darkness by Nick Lake

The White Bicycle by Beverley Brenna

Up, Tall and High by Ethan Long

Let’s Go for a Drive! written and illustrated by Mo Willems

Pete the Cat and His Four Groovy Buttons by Eric Litwin, created and illustrated by James Dean

Rabbit & Robot: The Sleepover written and illustrated by Cece Bell

Each Kindness by Jacqueline Woodson, illustrated by E. B. Lewis

No Crystal Stair: A Documentary Novel of the Life and Work of Lewis Michaux, Harlem Bookseller by Vaunda Micheaux Nelson, illustrated by R. Gregory Christie

I, Too, Am America by Langston Hughes, illustrated by Bryan Collier

Demetria Tucker is the winner of the Coretta Scott King – Virginia Hamilton Award for Lifetime achievement. The award, which pays tribute to the quality and magnitude of beloved children’s author Virginia Hamilton.

Demetria Tucker is the 2013 recipient. Tucker has served as youth services coordinator within the Roanoke (Va.) Public Library System and library media specialist at the Forest Park Elementary School, where she was selected 2007 Teacher of the Year. As family and youth services librarian for the Pearl Bailey Library, a branch of the Newport News (Va.) Public Library System, Tucker now coordinates a youth leadership program, a teen urban literature club and many other programs that support the youth of her community.

Thank you to Paper Tigers for this information! The Asian Pacific American Libraries Association has announced their 2013 literature award winners.

A Path of Stars by Anne Sibley O’Brien

Chengli and the Silk Road Caravan by Hildi Kang

Back to Front and Upside Down! written and illustrated by Claire Alexander

Somebody, Please Tell Me Who I Am by Harry Mazer and Peter Lerangis

My Family for the War is the 2013 Batchelder Award winner. Originally published in Germany in 2007 as “Liverpool Street,” the book was written by Anne C. Voorhoeve, and translated by Tammi Reichel.

A Game for Swallows: To Die, to Leave, to Return written and illustrated by Zeina Abirached, translated by Edward Gauvin

Son of a Gun written and translated by Anne de Graaf

No Belpré Illustrator Honor Books were selected this year.

The Revolution of Evelyn Serrano by Sonia Manzano

Steve Jobs: The Man Who Thought Different by Karen Blumenthal

Moonbird: A Year on the Wind with the Great Survivor B95 by Phillip Hoose

Titanic: Voices from the Disaster by Deborah Hopkinson

The Fault in Our Stars produced by Brilliance Audio, written by John Green, narrated by Kate Rudd

Paterson was born in China in 1932 to missionary parents and grew up in the American South, moving eighteen times before she was 18. After graduating from King College in Bristol, Tennessee, she herself became a missionary in Japan. She returned to the U.S. to attend the Union Theological Seminary in New York, where she met and married John Paterson, a Presbyterian minister. Her first book, “The Sign of the Chrysanthemum,” was published in 1973. Katherine Paterson currently lives in Barre, Vermont.

Love and Other Perishable Items by Laura Buzo

After the Snow by S. D. Crockett

The Miseducation of Cameron Post by emily m. danforth

Caring is Creepy by David Zimmerman

Juvenile in Justice by Richard Ross

My Friend Dahmer by Derf Backderf

One Shot at Forever by Chris Ballard

The Round House by Louise Erdrich

October Mourning: A Song for Matthew Shepard by Lesléa Newman

Katja Torneman, producer of “Anna, Emma and the Condors,” is the Carnegie Medal winner.

Margaret A. Edwards Award for lifetime achievement in writing for young adults

Tamora Pierce is the 2013 Edwards Award winner. Pierce was born in rural Western Pennsylvania in 1954. She knew from a young age she liked stories and writing, and in 1983, she published her first book, Song of the Lioness. She continues to write and even record her own audiobooks. She currently lives with her husband (spouse-creature) and a myriad of animals in Syracuse, New York.

May Hill Arbuthnot Honor Lecture Award recognizing an author, critic, librarian, historian or teacher of children’s literature, who then presents a lecture at a winning host site.

Andrea Davis Pinkney will deliver the 2014 May Hill Arbuthnot Honor Lecture. Andrea Davis Pinkney is a New York Times best-selling writer of more than 20 books for children and young adults including picture books, novels and nonfiction. During the course of her career, Pinkney has launched many high-profile publishing and entertainment entities, including Hyperion Books for Children/Disney Publishing’s Jump at the Sun imprint, the first African American children’s book imprint at a major publishing company.