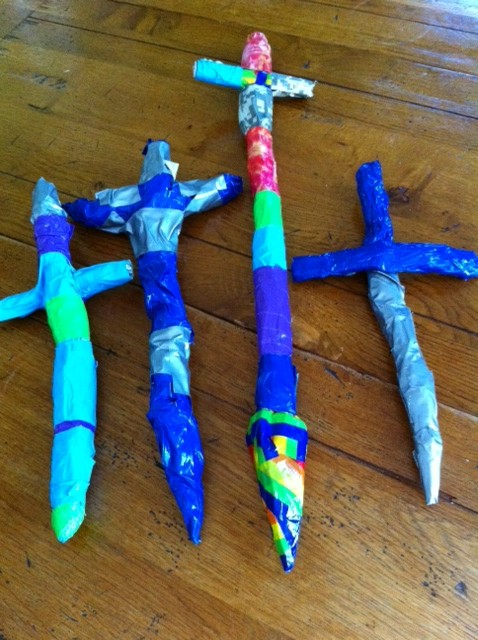 Percy Jackson is an either/or kind of book series … you either LOVE it or hate it. My 2nd grade son loves it so he proposed it for his book club and I found the graphic novel version to give his friends something new to read. For his book club, we will: make duct tape swords, eat blue food, play Medusa Freeze Tag, and wind down with a trivia game.

For our first activity, we’ll talk about Percy’s pen/sword Riptide or Anaklusmos (in Ancient Greek: Ανακλυσμός) that is made of Celestial Bronze, a material that is effective only on gods, demigods, Titans, Giants, and monsters.

Riptide was formerly owned, and used, by Hercules and Pleione. The sword’s dormant form was originally Zoë’s hair clip, which she gave to Hercules to help him fight Ladon. Riptide draws its power from the ocean, which is why it works well for ocean spirits and children of Poseidon like Percy. If I can find some large cardboard boxes, we can make shields too.

It must be blue, of course!

We’ll wind down with a trivia game.

1. Who is Annabeth’s mother? Athena, the Goddess of Wisdom.

2. Who is Clarisse’s father? Ares, the God of War.

3. What sort of creature is Mr. Brunner? Centaur, half horse/ half human.

4. What sort of creature is Grover? Satyr, half goat/half human.

5. Two words: What is the name of Percy’s boarding school? Yancy Academy

7. What type of tree is on top of Half-Blood Hill? Pine tree

9. What sort of animal head hangs above Ares’ cabin? Boar

10. Name one thing that Hermes is the god of. Thieves. Also messenger god.

12. What is the pattern on Mr. D’s shirt? Tiger stripes

13. Where do Percy and his mother like to go on vacation? Montauk on Long Island.

14. Three words: according to Percy’s mom, how did his dad disappear? Lost at sea.

16. What is Dionysus restricted from? He can’t drink wine or any other kind of alcohol for 100 years.

17. What part of the Big House seems mysterious to Percy? Attic

18. What does Percy use to defeat Clarisse when she tries to bully him? Water from the toilets.

19. What lives in the canoe lake? Naiads

20. Aside from pinochle, what is another game Dionysus considers the greatest human achievement? Pac-Man

22. What sort of creature tried to attack young Percy when he was taking a nap in daycare? Snake

23. Who was Zeus’ mother, who hid him from Kronos? Rhea

24. Chiron says there is a statue of what Greek mythological figure in Rockefeller Center? Prometheus

25. Who is the Greek lord of the dead? Hades

The Percy Jackson and the Olympians: Lightning Thief, The Graphic Novel

17 thoughts on “Book Club for Boys: Percy Jackson and The Lightening Thief”