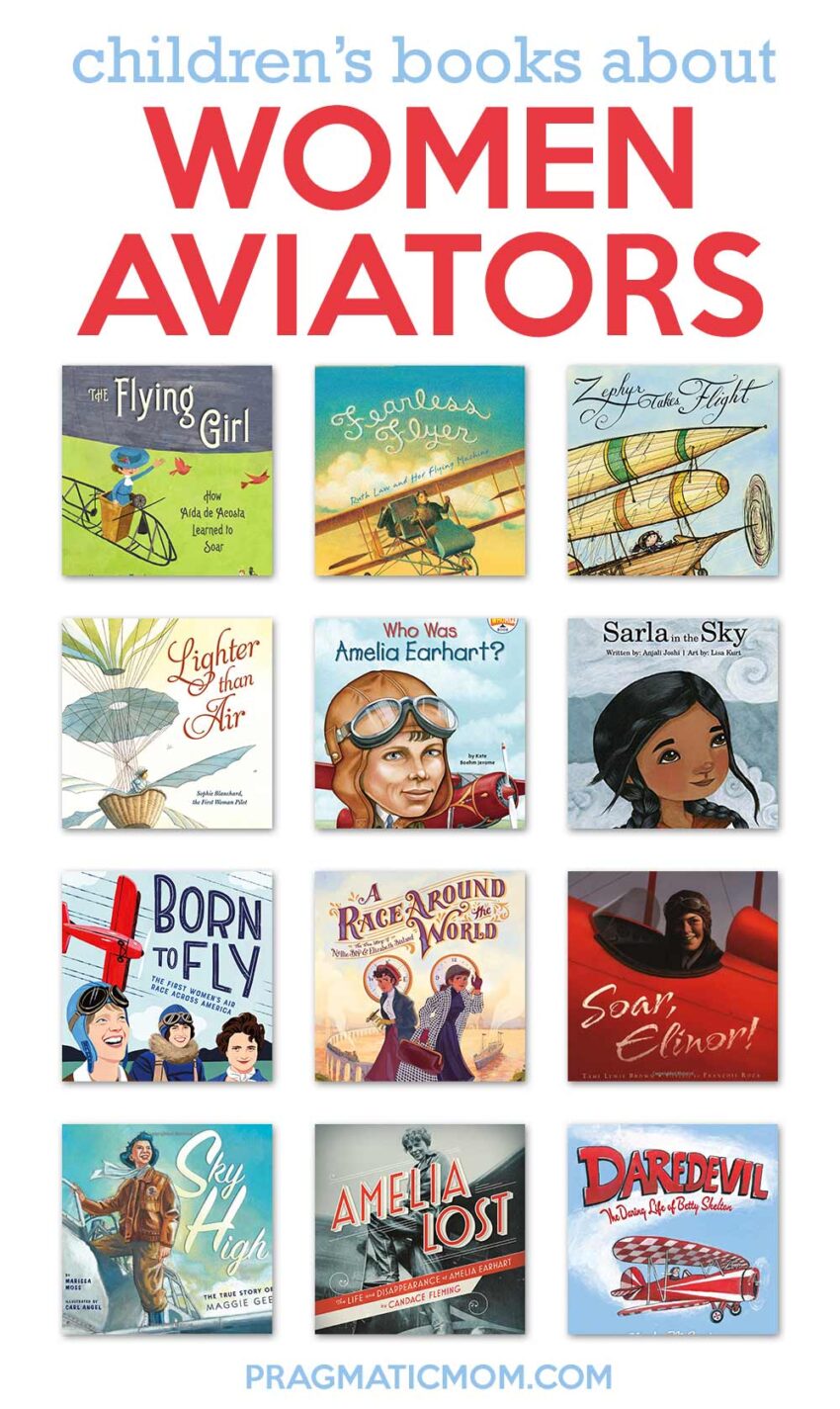 I love a mighty girl character or real-life role model for my girls. These girls all dared to fly at a time when flying was a great adventure. What makes girls daring enough to say “What If … Women Were Aviators?” And how can we encourage this? I’ve picked three books to explore this idea … a picture book, easy chapter book biography, and historical fiction middle grade chapter book. I’d love to hear your thoughts!

Picture Book for Girls Who Ask “What If?”

The Flying Girl: How Aida de Acosta Learned to Soar by Margarita Engle and Sara Palacios

This is the true story of a teenager, Aída de Acosta, and how she became the first woman to fly a motorized aircraft, an airship. [picture book, ages 4 and up]

Bessie, Queen of the Sky by Andrea Doshi and Jimena Duran, illustrated by Chiara Fabbri

To become the first black woman pilot, Elizabeth “Bessie” Coleman had to learn French to attend pilot school in Paris because it was the only flight school that would accept girls. She received her pilot’s license at age 29 and lived from January 26, 1892, to April 30, 1926. This beautifully illustrated picture book of Bessie Coleman will inspire readers that anything is possible if you don’t give up. [picture book, ages 4 and up]

On November 19, 1916, at 8:25 a.m., Ruth Law took off on a flight that aviation experts thought was doomed. She set off to fly nonstop from Chicago to New York City. Sitting at the controls of her small bi-plane, exposed to the elements, Law battled fierce winds and numbing cold. When her engine ran out of fuel, she glided for two miles and landed at Hornell, New York. Even though she fell short of her goal, she had broken the existing cross-country distance record. And with her plane refueled, she got back in the air and headed for New York City where crowds waited to greet her. [picture book, ages 5 and up]

What are the chances that two women would simultaneously decide to fly around the world, following Amelia Earhart’s quest? It’s 1964 and this is now an air race between two women, Jerrie Mock and Joan Merriam Smith, to become the first female to fly around the world. Both ran into problems and challenges from sandstorms to gas leaks. The timing of their two flights made this into a “race” but in fact, their planes and their routes were different. Both women completed their difficult journeys, setting speed and distance records along the way. This was a race where there were clearly two winners! [picture book, ages 6 and up]

Zephyr, a little girl, loves airplanes. She makes them, plays with them, and hopes to fly one day. But no one in her family wants to play airplane with her. When she has a spectacular crash, she is sent to her room … where she finds ways to fly! A girl version of Where The Wild Things Are! [picture book, ages 4 and up]

In eighteenth-century France, hot air balloons have captured the people’s hearts. The balloonists are heroes but they are all men. Sophie Blanchard changes this. She was the first woman pilot, making sixty-seven flights in hot air balloons. This is a beautiful and inspiring picture book biography that also details a little about what life was like during Napoleon’s reign. [picture book biography, ages 4 and up]

Who Was Amelia Earhart? by Kate Jerome

Sarla in the Sky by Anjali Joshi

The first early reader from multicultural publisher Bharat Babies, Sarla in the Sky is a beautiful story that is inspired by the real-life adventures of India’s first female pilot Sarla Thakrla. These beautiful hand-drawn acrylic illustrations combined with the poetic prose make this the ideal book for any young child interested in flight. This beautifully illustrated children’s books makes an excellent addition to the bookshelves of young readers aged five and up and is a great gift for a classroom looking to incorporate STEM into classroom learning. [early chapter book, ages 8 and up]

Beryl Markham, if a half-blood (ok, reading a lot of Percy Jackson right now), would have been a child of Artemis. Her true story reads like an adventure heroine of any age but particularly for her time, at the turn of the century. Her life was lived spectacularly, making Amelia Earhart seem tame by comparison. Raised in part by Maori warriors as a tween in Kenya, a female horse trainer, and then a great aviator adventurer. [chapter book, ages 9 and up]

Born to Fly: The First Women’s Air Race Across America by Steve Sheinkin

” This will put some new names before many readers; I especially was intrigued by Pancho Barnes and Marvel Crosson and might have to see if there are any books about them! The details of the race are very exciting, and there is a good mix of what is going on and what the women felt abou tit. The research is remarkable– luckily, there are memoirs by the flyers and lots of newspaper articles detailing every move! This reminded me a lot of Speno’s The Great American Foot Race: Ballyhoo for the Bunion Derby!  which is set during this era. Great nonfiction choice for readers who want an exciting tale!” [nonfiction middle grade, ages 10 and up]

A Race Around the World: The True Story of Nellie Bly and Elizabeth Bisland by Caroline Starr Rose, illustrated by Alexandra Bye

In 1889, New York reporter Nellie Bly—inspired by Jules Verne’s Around the World in 80 Days—began a circumnavigation she hoped to complete in less time. Her trip was sponsored by her employer, The World. Just hours after her ship set out across the Atlantic, another New York publication put writer Elizabeth Bisland on a westbound train. Bisland was headed around the world in the opposite direction, thinking she could beat Bly’s time. Only one woman could win the race, but both completed their journeys in record time. (from publisher) [picture book, ages 4 and up]

Thank you to readers Maria, Monise, Mel, Alex, and Kellye for their great book suggestions for more great Mighty Girl role models. I am especially excited to learn of women of color who were aviator pioneers and yet relatively unknown.

Flygirl by Sherri L Smith (older middle grades) and Almost Astronauts: 13 Women Who Dared to Dream by Tanya Lee Stone, which is nonfiction about women who tried to become part of the space program.

Bessie was the first female African American pilot AND the first African American to hold an international pilot license…And it is an inspirational story – education was a luxury back in the early part of the 20th century for many kids who had to earn money to help support their family, but Bessie persevered – walking miles and miles to school, when she could attend, and to pick up and return the laundry her mother did to earn money. from Randomly Reading

How about Sky High: The True Story of Maggie Gee by Marissa Moss. Maggie Gee dreamt of flying as a child. When she grew up, she was one of two Chinese American women to serve with the Women’s Airforce Service Pilots (WASPs) in WW2. It is a wonderful picture book. Thank you to Monise Seward for this recommendation!

Great topic, and lots of great titles here! I Code Name Verity was one of my favorite books read last year, and I especially liked the pilot/engineer Maddie’s voice. I also liked Soar Elinor, Talkin’ Bout Bessie and Almost Astronauts (and the rest of Tanya Lee Stone’s work.)

Amelia Lost, by Candace Fleming, is also a very gripping and well-told biography of Amelia Earheart, of the woman behind the myth, chock full of wonderful photos.

I found this on the excellent blog, The Non Fiction Detectives:

In 1930, when other girls are content to play with dolls, Betty June Skelton played with her metal plane. And so begins this engaging picture book biography about a woman who dared to dream high and became the first lady of firsts.

Daredevil: The Daring Life of Betty Skelton by Meghan McCarthy

“Millie has won a trip to the Amelia Earhart museum in Atchison, and arrives with her father (and his CPR dummy) in a chicken truck after their car fishtails in horrible winter weather. Thea arrives with her aunt in a motorcycle sidecar. Cassie is with her parents, who are busy professionals. Nathalie brings her pet rat, and sisters Robin and Wren are YouTubers. All are interested in flying and aeronautics, and have been chosen by the Ninety-Niners who help run the museum to come and visit. They are met by Birdie, the elderly caretaker, her nephew Collin, housekeeper Edna and chef Perry. They are all pleased to be in the home of their idol, and are having fun completing a scavenger hunt when things start to go wrong. A pair of goggles that are on display before being turned over to the Smithsonian go missing, and Birdie is slipped a drug that makes her pass out. Everyone is a suspect, and the girls set out to solve the mystery. This leads them to explore the house, look into Amelia’s history, and question the motives of everyone. Will they be able to find the goggles before they are to be handed over?” [middle grade, ages 8 and up]

Please click on image of book to view more closely at Amazon. As an Amazon Associate, I earn from qualifying purchases.