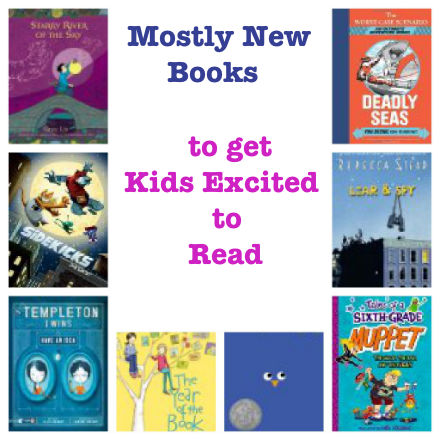 My 2nd grade son and I have been reading most of these books together. I do the heavy lifting but he will read a half page here and there. I think that’s ok. We’ve especially enjoyed the challenge of trying to make it through the Worst-Case Scenario adventures with getting ourselves killed or sent home.

My son has also introduced to a small pile of graphic novels he purchased at the school book fair last month. SideKicks is especially well done and reads like the next big animated movie. Not surprising because it’s from a Disney animator-turned-author.

We are going to see Grace Lin talk about Starry River of the Sky tomorrow. PickyKidPix is bringing her book club and we are all excited to meet her.

So many great books. So little time! What are you reading with your kids and what do you recommend? Please share!

Non-fiction and adventure collide in this appealing “you decide” chapter book aimed at boys. You, the reader, will need to read the Expedition File in the back first to glean the knowledge necessary to survive. At critical moments during this adventure, you’ll need to decide what to do: two choices will lead to different outcomes. There are 33 possible endings but only 1 path to sail around the world in one go. My 8-year-old son loves this combination of being in the driver’s seat while utilizing a database of knowledge. His sailing knowledge is limited to fishing trips but boys with sailing experience will particularly enjoy this adventure. [chapter book, ages 8-14]

The Year of the Book is a subtle and realistic portrayal of what it means to grow up as a second generation Asian American. For 4th grader Anna Wang, it means being on the sidelines at school while her once best friend trades up socially. At home, life is safe and cozy, especially with books that comfort and entertain her. Is it her Asian-ness that keeps her from being popular or it is her bookish personality? Should she care or embrace it? Books, family and friends make up the triad that define Anna right now and this is the year of the book to learn how to balance it all. I’d hand this multicultural chapter book to any girl who has ever felt left out. [chapter book, ages 8 and up]

Tales of a Sixth-Grade Muppet Book 3: The Good, the Bad, and the Fuzzy by Kirk Scroggs

The premise for this series is intrinsically comical. 6th grader Danvers Blickensderfer wakes up one morning to find that he’s been transformed into a muppet. Each book in the series has Danvers searching for a reverse Muppetophosis while he grapples with the reality of middle school life from bullies to boy band battles, all the while assisted by his pals in the Muppet theatre. We find the muppet characters to be an integral part of the fun. This series is particularly suited for reluctant boy readers but boys 7 and up will enjoy it.

Starry River of the Sky by Grace Lin

I’m a huge fan of Grace Lin’s work her latest companion book to Newbery Honor winning Where the Mountain Meets the Moon did not disappoint. In fact, I think it’s her best work to date. She masterfully weaves Chinese mythology into an adventure story of a young boy’s rebellion against his greedy and self-absorbed father, Magistrate Tiger. Rendi is a more complex and realistic character than Minli’s beatific can do optimism. But it’s probably more correct to think of this pair of books as yin and yang counterparts with each resolving the issue of how the moon meets the mountain. I’d recommend this book to kids ages 8 and up.

Dan Santat, the animator who brought us Disney’s The Replacements  animated series, has a graphic novel gem about an older super hero and his superhero-wanna-be pets. Captain Amazing, the superhero savior of Metro City, is getting old and needs backup in the form of a sidekick. Told from the point of view of his pets, they want this coveted position but must convince their dad, Captain Amazing, who is too busy auditioning sidekick prospects to spend time with them. Add in a bad guy, DNA transfer technology, a peanut allergy and a disgruntled ex-pet and you end up with a graphic novel as entertaining as an animated movie. My son and I loved this exception graphic novel’s full color illustrations on every page and the plot that is just right for a younger audience. [graphic novel, ages 6 and up]

The Templeton Twins Have an Idea: Book 1 by Elis Weiner, illustrated by Jeremy Holmes

Suppose there were 12-year-old twins, a boy and girl named John and Abigail Templeton. Let’s say John was pragmatic and played the drums, and Abigail was theoretical and solved cryptic crosswords. Now suppose their father was a brilliant, if sometimes confused, inventor. And suppose that another set of twins—adults—named Dean D. Dean and Dan D. Dean, kidnapped the Templeton twins and their ridiculous dog in order to get their father to turn over one of his genius (sort of) inventions. Yes, I said kidnapped. Wouldn’t it be fun to read about that? Oh please. It would so. Luckily for you, this is just the first in a series perfect for boys and girls who are smart, clever, and funny (just like the twins), and enjoy reading adventurous stories (who doesn’t?!).

I love a snarky narrator and The Templeton Twins’  is the best I’ve ever encountered. Equal parts clever and sarcastic, he — I think it’s a he –assumes the reader is responding to his every word and insists on audience participation with quizzes at the end of each chapter. The twins would be up to his questions. They, too, are clever which is good because they need their smarts to rescue themselves from their inventor father’s nemesis, adult twins of a nefarious nature. I’d hand this funny adventure book to a clever kid who is capable of outwitting an adult. Which is to say, most kids! [chapter book, ages 8 and up]

Stead’s new book is a spare zen gem with the names of her characters shouldering some of the story telling. There’s Candy, Safer’s little sister who loves candy. Bob English Who Draws is rewriting the rules of English. And, of course, seventh grader Georges, named after artist Georges Saurat whose dot paints are a metaphor for Georges’ middle school life. Focus on the big picture when bullies pick on him. Notice the small dots when they don’t. Seeing the picture is harder than it seems. Things shift. People change. All is not what it seems. This is a remarkable book. I’d hand this to kids who like Newbery books as well as anyone who loved Hoot by Carl Hiaasen.