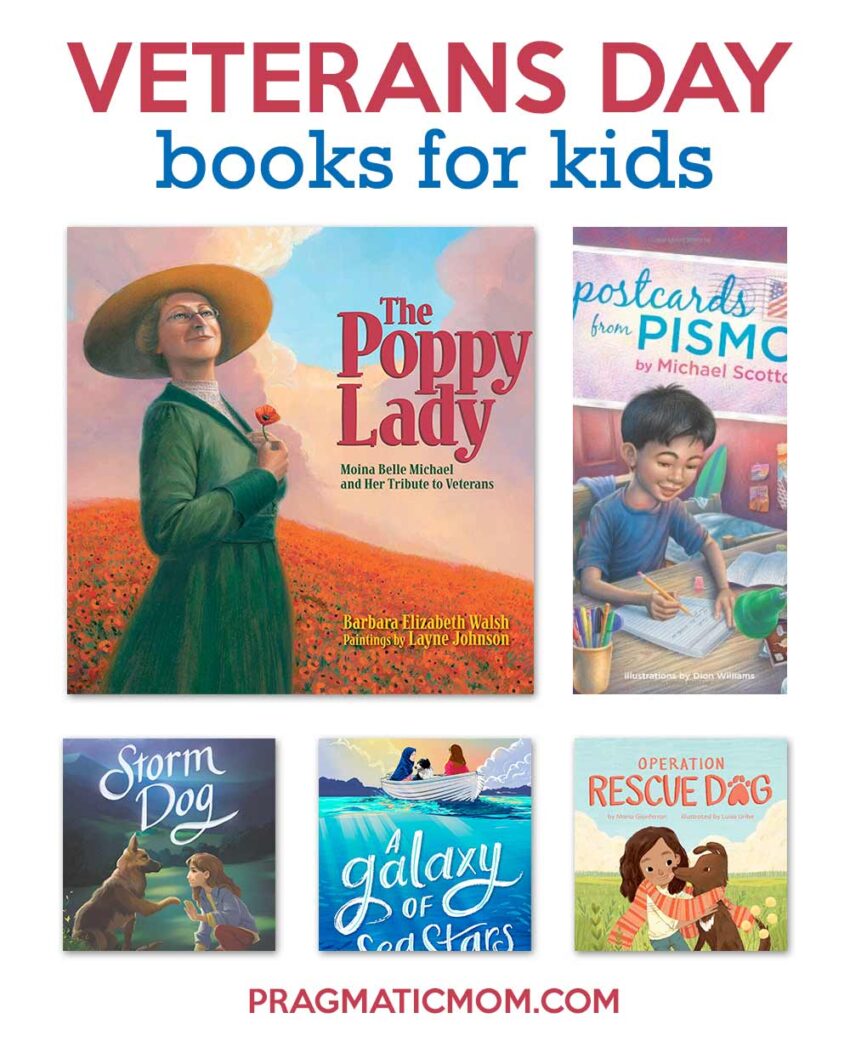 And now the Torch and Poppy red

We wear in honor of our dead.

Fear not that ye have died for naught,

My kids’ elementary school has been celebrating Veterans Day for the past few years by asking the kids to create a card to a Veteran. They supply a blank card and envelope and the kids supply their creative energy. The card get mailed off and inevitably, every year, a touching letter will be sent back in return from a Vet. Reading his handwritten card usually sends chills up my spine. He is grateful for the effort the kids made and for the fact that someone appreciates the horrors and sacrifices that he made for his country. We don’t talk about war much at home. I find the idea of war to be terrifying and can’t read about it or watch movies depicting war. Even children’s books. But I am happy to celebrate Veteran’s Day as a way to appreciate our troops out there fighting.

In honor of our Veteran’s, I have found two great children’s books. The Poppy Lady is a picture book biography. Postcards from Pismo Beach is a chapter book for ages 8 and up that reminds me of our Veteran’s Day card project.  How do you celebrate Veteran’s Day?

My son made this poppy project at school. He used red and black construction paper, a brad and a pipe cleaner. p.s. There was a 3 cent commemorative stamp created in honor of Moina Michael. p.p.p.s. This is a video of an art installation, Blood Swept Lands and Seas of Red, as it continues to grow throughout the summer until the moat is filled with 888,246 ceramic poppies, each poppy representing a British fatality during the First World War. The Civil War ripped Moina’s hometown in Georgia apart, leaving a wake of poverty. At fifteen in the year 1885, Moina is well-educated and decides to start a school for the neighbors’ children who otherwise would not be able to attend school. By 1917, Moira’s school is well established but the United States is on the brink of war. When the U.S. joins WWI, Moina is moved to help — these are her ex-students who are going off to war! We Shall Not Sleep, a poem by Lieutenant Colonel Dr. John McCrae written after the battle of Flanders, inspires her to use the poppy as her pledge to soldiers. Her relentless efforts pay off and the poppy becomes a symbol and talisman to help veterans around the world!

In Flanders fields the poppies blow
Between the crosses, row on row
That mark our place; and in the sky
The larks, still bravely singing, fly
Scarce heard amid the guns below.

We are the Dead. Short days ago
We lived, felt dawn, saw sunset glow,
Loved and were loved, and now we lie
In Flanders fields.

Take up our quarrel with the foe:
To you from failing hands we throw
The torch; be yours to hold it high.
If ye break faith with us who die
We shall not sleep, though poppies grow
In Flanders fields.

Author Barbara Elizabeth Walsh has a personal story about Moina. In her attic, there is a box with poppy pinned to a handwritten postcard. It was sent to her mother, then the fiancée of her father, by Moira. He was one of many, many soldiers that she lent a kind ear to. Can the kindness and caring of one person ripple through the world from one century into the next? The story of Moina Belle Michael, not a household name by any means, proves that it can! [advanced picture book, ages 6 and up]

Alma’s mother is away in Iraq, and it’s been three months since she’s heard her voice. Lulu is a rescue dog that Alma’s abuela thinks will be the perfect addition to their family. After each has a small mishap getting to the Operation Dog Rescue stop, it’s clear that Lulu has found a forever home. [picture book, ages 4 and up]

10-year-old Felix Maldonado has a school project to write a letter to a soldier fighting in Afghanistan. To his surprise, his soldier, Marcus,  writes him back and soon Felix begins to rely on his for life advice, especially after he gets bullied and his older brother enlists in the military. Told entirely in letters, emails and postcards from Felix to Marcus, Postcards from Pismo is a coming of age story that tackles what it means to be brave, both at home, in school facing bullies, and on a battlefield. [chapter book, ages 8 and up]

A Galaxy of Sea Stars by Jeanne Zulick Ferruolo

“Izzy loves living in Seaside, Rhode Island, but there are challenges. Her father has returned from military duty in Afghanistan with some injuries as well as PTSD, and the family has had to leave their home and are now trying to run the local marina. Her mother is living on a nearby island, helping her family run a diner. Izzy is angry that her mother is not at home, and it doesn’t help that her two best friends, Zelda and Piper, are acting strangely. They’ve all managed to get into the same homeroom since they are all doing the school video announcements, but something is off. Izzy starts to spend more time with Sitara, whose father was a doctor and an interpreter in Afghanistan and had to leave because of threats to the family. Sitara wears a hijab to school and is forthright about it, even mentioning on the school announcements that if anyone has questions, she would rather be asked them to her face. This doesn’t stop some of the jerky students from giving her a hard time about it. When this includes Zelda, Izzy is distraught that her best friend is so mean. Combined with her father’s difficulties and the absence of her mother, she becomes overwrought, but eventually learns to take to heart the idea that her courage should be bigger than her fear.” [middle grade, ages 8 and up]

“This was such a vivid description of spring in a small town in the Blue Ridge Mountains that I could smell those apple blossoms. Very atmospheric! Ariel’s family dynamics are interesting, and her friendship with Sergeant Josie is touching. I especially appreciated the unfortunate but illuminative scene where Josie is targeted by people who want her to “go back to her country”; she’s from Puerto Rico. Teaching Duke to dance was fun, which nicely balances out her well-warranted anxiety about George. I was also glad to see that the father was described as older when his involvement in Vietnam protests was mentioned.” [middle grade, ages 9 and up]

“Paterson’s keen sensitivity, compassion, and penetrating sense of drama bring readers a moving story about Birdie’s father’s third deployment to the middle east and her fear for his safety. Separation is tough on military children and their families both emotionally and financially. Birdie’s mad at the world, refuses to go to the airport to say goodbye and fears her dad’s luck has run out and he won’t return home this time. So she is angry and has big questions for God — if there is a God. Readers will go through Birdie’s crisis of faith with her.

Paterson creates realistic and memorable characters readers will love spending time with. Birdie is caring and resilient. She isn’t popular in her new school and longs for a friend. She is befriended by Alicia Maria Suggs (Alice May) who claims to have a famous mother who is an actress. Their relationship is exhausting for Birdie. Alicia is bossy, obnoxious, and controls her. Birdie suspects something is seriously wrong at Alicia’s house and that her mother may be abusive. That would explain Alicia wearing make-up. So Birdie has to make some hard decisions about how she can help Alicia. Thankfully she has Gran who is the rock in their family and is always ready to listen. She’s kind, patient, and tough when she needs to be. Her teacher Mr. Goldberg is another kind and positive influence for Birdie.

I love that Birdie finds a diary her father gave her for Christmas. It’s been buried in an unpacked box. She calls it “Betsy Lou.” There’s a note inside from her dad that moves her. So she begins to write down all of the things that she’s doing so she can share everything he misses while he’s deployed. It also helps her count down the days until he returns. Readers will be able to explore Birdie’s deepest thoughts, anguish, and fears. It helps Birdie cope during some challenging moments in the story. (Sorry, no Spoilers.) But readers are going to cheer for Birdie.” [middle grade, ages 9 and up] Remembering the Veterans in my life: A book list honoring the 442nd