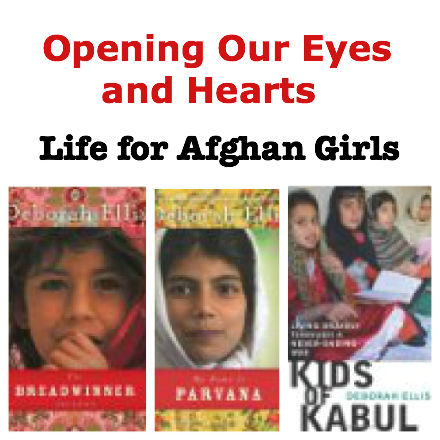 Why We Need to Teach Our Kids About Afghanistan

It’s hard for me to imagine what it is like to grow up as a girl in Afghanistan. For my daughters, life there is unimaginably different from their own experience growing up in a suburb of Boston.  Girls not allowed to attend school? Yes, my daughters, that still exists in the world.

But not without a price…

A day in the life of an Afghan school for girls

Under Taliban rule, fewer than 50,000 girls were in school. Today, 3.2 million attend. Two sessions a day are needed to accommodate all the students.

There is no electricity in the building, leaving hallways dark and some classrooms quite dim, yet pupils seem enthusiastic to learn. Occasionally the girls go outside to the water pump to get a drink of water or wash their hands.

Compared with other Afghan schools, Speena Adi is relatively well staffed. Even as more children come to school, many challenges remain: overcrowding; inadequate teacher pay; a paucity of school supplies; and, most distressing, hundreds of incidents of violence against schools, teachers, and even students by Taliban agents. from The Christian Science Monitor

I am indebted to Deborah Ellis’ Parvana series for educating me on modern life in Afghanistan. I had heard that anyone who dared teach girls became a target marked for death by the Taliban.

The Breadwinner, set in Afghanistan, takes us on 11-year-old Parvana journey. She lives with her family in a bombed-out apartment building in Kabul. When her father is arrested for the crime of having a foreign education, the family is left with no money or resources. Forbidden to earn money as a girl, Parvana must transform herself into a boy and become the breadwinner.

In Parvana’s Journey, her father has died and the family has scattered. Parvana, now 13 years old, is determined to find them. Again masquerading as a boy, she joins a group of wandering children, all refugees from war, who exist mainly on courage.

In Mud City, the focus shifts to 14-year-old Shauzia, who lives in the Widows’ Compound in Pakistan and dreams of escaping to a new life in France. Deborah Ellis uses simple, compelling language, memorable characters, and a wealth of imaginative detail in this wrenching look at the human cost of war that is also a surprisingly hopeful story of survival.

It’s easy to forget that the United States is at war in the Middle East. For my kids as well, they have no idea who the “enemy” is. While they have some images of 9/11, this world is far, far away.

What I like about this series is that it humanizes us, the reader. The victims in a war are children around the same age as the target audience. Imagine a 6th grader forced to support her family. Imagine a world of endless war. Books have the ability to transport us and to make us better humans. This is one of those powerful series with that capacity, difficult though it is to learn about life in a war zone fraught with danger and know that this is reality.

My Name is Parvana

On a military base in post-Taliban Afghanistan, American authorities have just imprisoned a teenaged girl found in a bombed-out school. The army major thinks she may be a terrorist working with the Taliban. The girl does not respond to questions in any language and remains silent, even when she is threatened, harassed and mistreated over several days. The only clue to her identity is a tattered shoulder bag containing papers that refer to people named Shauzia, Nooria, Leila, Asif, Hassan — and Parvana.

In this long-awaited sequel to The Breadwinner Trilogy, Parvana is now fifteen years old. As she waits for foreign military forces to determine her fate, she remembers the past four years of her life. Reunited with her mother and sisters, she has been living in a village where her mother has finally managed to open a school for girls. But even though the Taliban has been driven from the government, the country is still at war, and many continue to view the education and freedom of girls and women with suspicion and fear.

As her family settles into the routine of running the school, Parvana, a bit to her surprise, finds herself restless and bored. She even thinks of running away. But when local men threaten the school and her family, she must draw on every ounce of bravery and resilience she possesses to survive the disaster that kills her mother, destroys the school, and puts her own life in jeopardy.

A riveting page-turner, Deborah Ellis’s new novel is at once harrowing, inspiring and thought-provoking. And, yes, in the end, Parvana is reunited with her childhood friend, Shauzia.

Are there any “good guys” in a war? Are the Americans in Afghanistan part of the violence that touches civilians including children? Parvana’s story continues as she is captured by American forces and identified as a suspect. Just 15-years-old, Parvana has endured a lifetime of tragedy and violence.

Kids of Kabul: Living Bravely Through a Never-Ending War

Since its publication in 2000, hundreds of thousands of children all over the world have read and loved The Breadwinner. By reading the story of eleven-year-old Parvana and her struggles living under the terror of the Taliban, young readers came to know the plight of children in Afghanistan.

But what has happened to Afghanistan’s children since the fall of the Taliban in 2001? In 2011, Deborah Ellis went to Kabul to find out. She interviewed children who spoke about their lives now. They are still living in a country torn apart by war. Violence and oppression still exist, particularly affecting the lives of girls, but the kids are weathering their lives with courage and optimism: “I was incredibly impressed by the sense of urgency these kids have — needing to get as much education and life experience and fun as they can, because they never know when the boom is going to be lowered on them again.”
The two dozen or so children featured in the book range in age from ten to seventeen. Many are girls Deb met through projects funded by Canadian Women for Women in Afghanistan, the organization that is supported by royalties from The Breadwinner Trilogy. Parvana’s Fund provides grants towards education projects for Afghan women and children, including schools, libraries and literacy programs.

All royalties from the sale of Kids of Kabul will also go to Women for Women in Afghanistan.

Deborah Ellis is a Breadwinner for Afghan women

p.p.s. If you want to help, here are some non-profit organizations focusing on helping Afghan children: 14 thoughts on “Life in Afghanistan for Girls”